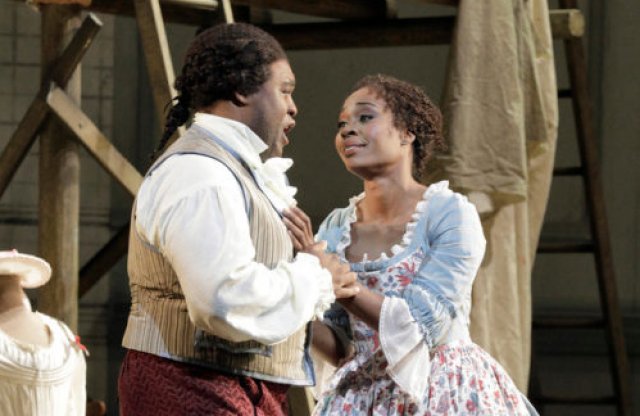 What more can be said about Wolfgang Amadeus Mozart’s opera buffa masterpiece The Marriage of Figaro? It appears in most lists of opera’s finest, and many consider it opera’s greatest opera, the closest thing to perfection on the musical stage. So, what commends it? Of course, it starts with some of Mozart’s most beautiful music, highlighted by several special arias and sparkling ensemble pieces. But driving the narrative is one of the truly fine comic opera librettos, by Lorenzo da Ponte, based on Pierre-Augustin Beaumarchais’ play. We are amused by the characters’ foibles and take them into our hearts.

Marriage of Figaro is lively and charming throughout. Yet what distinguishes and surprises is the central issue, droit du seigneur, that is, the right of feudal lords to have sex with women in their employ, especially on their wedding night. It seems that such a topic would be buried by the censors of the day. Anyway, Figaro is to wed Susanna, and though Count Almaviva had previously rescinded his right, he is an incessant womanizer and particularly has a thing for Susanna. The concern that he might re-enforce the right sets off a series of intrigues. And he’s not the only one who yearns for someone whom he shouldn’t. Of course, these illicit desires lead to many situations of characters in the wrong place at the wrong time and having to take refuge under skirts, behind locked doors, and even by jumping out a second-floor window. Mix in mistaken identities, and mayhem ensues.

Music, however, always comes first. There are so many respected set pieces that selecting the best is mostly a matter of taste, though the female singers certainly have some wonderful moments. Perhaps the strongest sentiment is revealed in Countess Rosina’s musing “Dove sono” about her failing marriage and whether it can be revived. Nicole Heaston’s caressing of the aria, especially beginning with the refrain of the title lyrics is very touching. Another “hit song” comes from Cherubino, the page, a trousers role performed with consummate skill by Serena Malfi who delights with her exquisitely delivered “Voi che sapete.” Infatuated with the Countess, Cherubino’s bouncy tune reminds us of our own first love, being repeatedly buffeted between pleasure and pain. Another notable piece is the brief duet between the Countess and Susanna, “Sull’aria…che soave zeffiretto.” Despite its content, setting a trap by inviting the Count to a tryst, the music is lovingly sung and absolutely ethereal, anticipating Richard Strauss’s exceedingly delicate melodies and harmonies in Der Rosenkavalier.

As the lovers, Michael Sumuel plays Figaro and Jeanine De Bique plays Susanna. Their acting magnetism shows throughout, but both needed time at opening night to warm their voices. Eventually, they were lush and full. Also notable is Levente Molnár as the Count. His vocalizations shift from deep well to virtual eek with the greatest of ease. And his gesticulations and mime, which include swatting at an imaginary fly, are a scream. Each of the supporting performers is delightful, though a favorite is the ubiquitous Catherine Cook, who delights in voice and manner as the manipulative and lascivious Marcellina. But is she really visually suggesting what I think she is with the snout of a pig’s head?

Although Marriage…. engages throughout, it is not without issues. A run time of three hours and forty-five minutes may have been a virtue in its time, but there is plenty of evidence that modern audiences prefer tighter timelines. And the longer the opera, the more stale the characterizations, situations, and musical motifs can become. Finally, Act IV becomes complicated and somewhat murky to the point of distraction.

Oft-produced plays often beg refreshing, and Marriage…. is no exception. San Francisco Opera’s new production retains the time frame of the original (late 18th century) but moves the action from Spain to post-Revolutionary America. The shift in venue carries no significance for this opera. However, it does convey meaning as part of the company’s offering over a three year period of the trilogy of Mozart/da Ponte collaborations, with Cosi fan Tutte next year and Don Giovanni the following. All will take place in the same manor house, which is a construction project during Marriage…., complete with blueline architectural drawings on the sets used throughout. The house then serves as the setting for Cosi in the 1930s, and a dystopian future in 2080 for Giovanni. As a footnote, these three operas were consecutively composed by Mozart in 1776 – 1790, but the fertile relationship with da Ponte sadly ended with the latter’s loss of patronage in Vienna with the death of Emperor Joseph II in 1790.