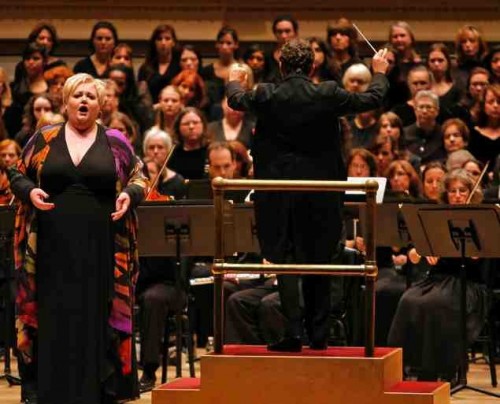 Stephanie Blythe performed with subtlety and a huge scope as she sang the Alto Rhapsody. It is hard to believe in this emotional piece that she is just as good as Mistress Quickly in Falstaff. But of course she is. 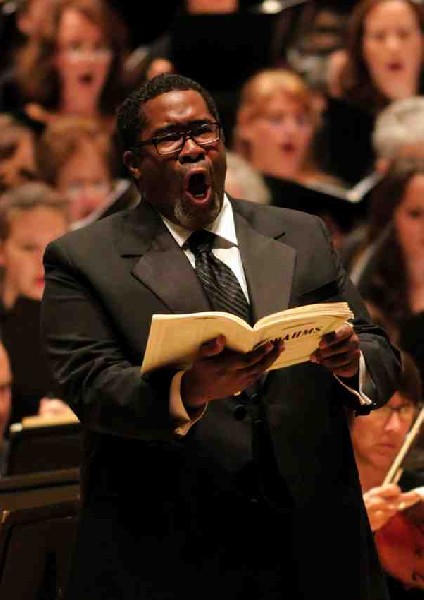 Eric Owens is everywhere. Everyone wants his magnificent bass. He was not diminished by his silly starring role in Ligetti’s Le Grand Macabre. He brought dignity to General Groves in Dr. Atomic, even though he told a subordinate to change the weather report if it was bad. And in a flash he has made Alberich in Das Rheingold a signature role. Where can we hear him next?

Erin Morley is an up and coming coloratura soprano, whose lush soprano caressed the Brahms German Requiem.

The Collegiate Chorale performed at Carnegie Hall under James Bagwell conducting the American Symphony Orchestra.Ã‚Â  When Robert Shaw first formed it, Arturo Toscanini remarked that he had at last found the maestro he was looking for.Ã‚Â  Clearly the Chorale in its 69 year is still performing in this grand tradition.

They first tackled the seldom performed Alto Rhapsody, in which Stephanie Blythe, fresh from her commanding role as Fricka at the Metropolitan Opera, sang the mezzo solo, easily hitting the elusive mark set by her predecessors, Marian Anderson and Dame Janet Baker.Ã‚Â  Blythe has a naturally huge voice of great beauty and subtle emotion.Ã‚Â

Brahms set an extract from a Goethe poem, Winter Journey into the Harz Mountains, for the text of this Rhapsody.Ã‚Â  Musically, we teeter on the edge of an abyss, into the dark night of the soul.Ã‚Â  It is a downer.Ã‚Â  But as Blythe sings: the barren waste swallows him up.Ã‚Â she is provocative. Who can heal the pains of a man whose balm has become poison, who has imbibed the hatred of mankind?Ã‚Â  In the solid music, as performed by Blythe, the orchestra and the magnificent Chorale, is the answer.Ã‚Â  Man can be healed by art.Ã‚Â  Heavy duty ideas for an evening full of perfectly beautiful music.Ã‚Â

The Brahms German Requiem followed.Ã‚Â  Eric Owens, also fresh from a much-heralded Wagner role, sang the bass and Erin Morley, an understandably up and coming coloratura soprano, whose gifs of dynamic range, and lyricism were on abundant display, sang the solo roles.

This Brahms is a very difficult performance piece, in part,Ã‚Â  because BrahmsÃ¢Â€Â™ references many different styles.Ã‚Â  BrahmsÃ¢Â€Â™ friend, Robert Schumann, told him to direct his talents to the massed forces of chorus and orchestra who could lend him their power.Ã‚Â  The Collegiate Choral and American Symphony Orchestra did just this.

Since the Requiem does not use the Latin liturgical text, it is not a conventional requiem mass.Ã‚Â  Instead, Brahms assembled the text from 15 passages of Martin LutherÃ¢Â€Â™s translation of the Bible.Ã‚Â  The focus is less on death than a consolation for the living, and in this respect, is tied to the Alto Rhapsody. No mention of redemption through Christ is made.Ã‚Â  Brahms called it a Ã¢Â€Â˜human requiem.Ã¢Â€Â™

The music ranges from somber homophony at the opening of the second movement to elaborate fugues at the close of the third and sixth.Ã‚Â  The Chorale and orchestra performed the familiar and gorgeous Ã¢Â€ÂœHow Lovely is thy Dwelling Place,Ã¢Â€Â with the appropriate lilt of a Viennese waltz.Ã‚Â  They articulated the declamatory passages in the sixth movement explosively.

Music for chorus is inclusive Ã¢Â€Â“ while the assembled instruments of an orchestra can distance us, and the solo voice impose and stun, a group of men and women into which we could easily fall, even with weaker and less accurate voices, always invites.

Many years ago I had the unforgettable experience of performing the Brahms Requiem in a high school chorus with the Boston Symphony.Ã‚Â  The Collegiate Chorale, the very best ofÃ‚Â choruses, offers a perfect guideline for others who would sing together and perfect pleasure for those of us who listen.

On their New York schedule are Kurt WeillÃ¢Â€Â™s Knickerbockers Holiday, January 25 and 26, 2011, We Can Remember, Themes from the Camps and Ghettos on March 10, 2011 and Something Wonderful, A Night of Broadway, with Deborah Voight, on May 19, 2011