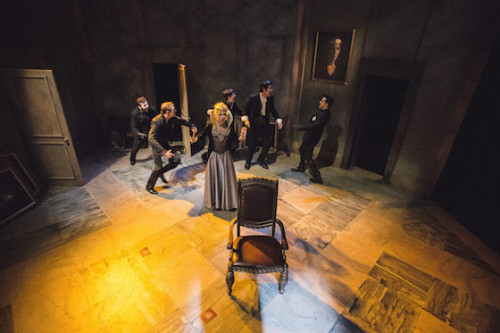 Oracle Productions' adaptation of Shakespeare's Richard III as No Beast So Fierce is minimalist, dance-theatre-inspired and trimmed down to a crisp 90 minutes. Its most interesting feature is that the Duke of Gloucester, later Richard III, is played by a woman--Katherine Keberlein, who recently won a Jeff award for her performance in Brecht's The Mother at Oracle. Keberlein plays Richard as a woman fighting for control in a male world but she lacks the fierceness and evil strength that we expect to see in actors playing Richard.

Max Truax, who directed The Mother, adapted and directs No Beast So Fierce, which incorporates bits of other classic texts. Original music by Jonathan Guillen is creepily appropriate. Joanna Iwanicka's set design resembles a Regency drawing room before the furniture arrives. Portraits of royal leaders line the walls until they're taken down in a series of artistic regicides. The design features a high walkway around the stage where characters lurk, spy or participate in dialogue. Jeremy Clark's projections speed a racing horse and rider around the walls, hinting at the play's most famous line, and splash the walls blood-red as the frequent murders and executions proceed.

Joan Pritchard's costuming for Richard begins as business-feminine and becomes increasingly masculine. Most of the actors are dressed in variations of hipster black. Alicia Hines also deserves mention for her creative blood effects.

The number of characters played by the cast of eight has by necessity been reduced to 14 from the 35 to 40 in Shakespeare's version. Cramming all of Richard III into 90 minutes means eliminating some nuances and character motivations. So there are bound to be murmurs of "Wait, who was that and why was he murdered?" as I heard occasionally around me.

The play's title comes from a line spoken by Buckingham: "No beast so fierce but knows some touch of pity. But I know none, and therefore am no beast."

No Beast So Fierce continues at the Storefront Theater, 66 E. Randolph, through Nov. 8 with performances Thursday-Saturday at 7:30pm and Sundays at 2pm. Tickets are free and reservations are strongly recommended; reserve tickets online or by calling 312-742-8497.