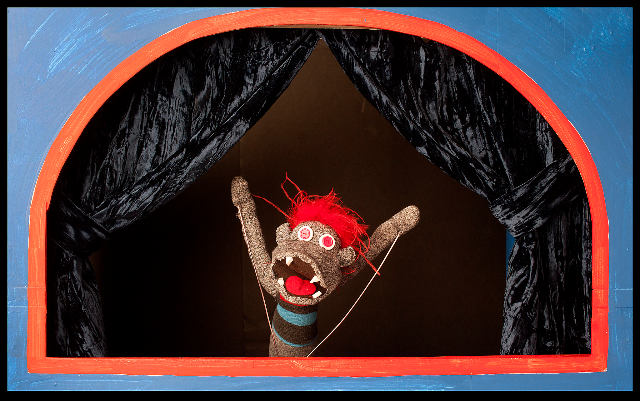 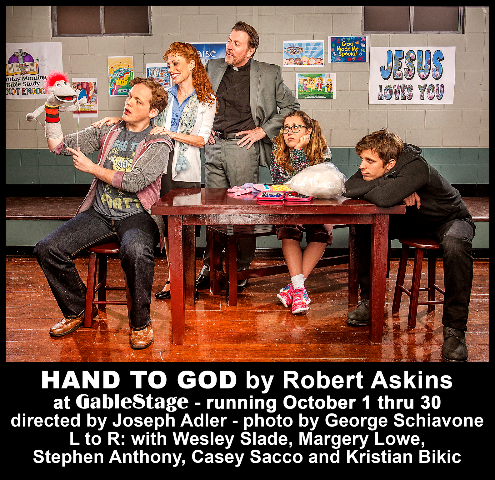 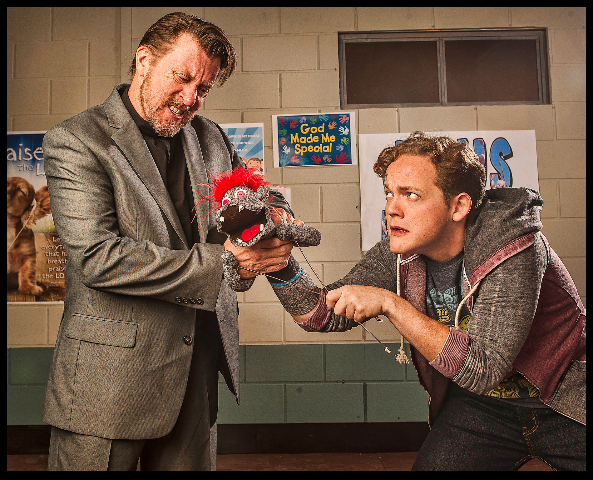 The charming, seemingly innocent puppet appears in the light and starts to speak in a Sesame Street-like sweet tone. If you only heard the tone of his voice, you’d find it harmless to bring your 4-year-old to the show. This could be a great introduction to the magic of live theater, you might tell yourself.

How wrong you would be about the puppet and the play in which he appears -- “Hand to God,” the biting, darkly comic, disturbing, thought-provoking and meaty play receiving a solid southeastern premiere at GableStage through Oct. 30.

This is technically a puppet show. But it’s hardly one “for the whole family to enjoy” as some billboards might advertise such entertainment.

In the stew that is “Hand to God,” you’ll find some of “Avenue Q,” that potty-mouthed musical with Muppets that makes us laugh while dealing with serious subjects such as pornography and political correctness.

Look further into the ingredients of the aforementioned scorching stew, and you might also detect hints of “Little Shop of Horrors,” “The Exorcist” and “Wicked” (particularly the song “No Good Deed Goes Unpunished.”)

But most of all, “Hand to God” feels like the Vacation Bible School of a pastor and parent’s nightmares.

This off-beat comedy-drama, which played Off-Broadway before moving to Broadway in 2015, received positive reviews and a Tony award nomination for best play. Credit director Joseph Adler for persevering in his attempt to secure the rights for GableStage, which strives “to present the most vital works of contemporary playwrights worldwide.” GableStage has a history of bringing plays directly from Broadway and Off-Broadway runs, and has scored again with “Hand to God.”

The play touches on many topics for a roughly 105-minute work. Dealing with the aftermath of a parent’s death, a youngster’s search for identity, communication problems between parents and children, the treatment of women, our conflict with the evil inclination within us, bullying and religious pretense all offer fodder for post-theater thought and discussion.

This play makes us look inward, forcing us to reconsider our values, beliefs and that which drives us. Quality theater has the ability to do this, and “Hand to God” is an edgy gem of a weird, wacky and worthy play.

The setting is the present, and isn’t that appropriate, considering much of the play deals with the treatment of women. There are, indeed, Trumpian qualities to some of the characters.

Playwright Robert Askins places us in the basement of a church in Cypress, Texas (designed spaciously and with telling detail by Lyle Baskin, whose set is versatile enough to change scenes with little maneuvering).

Margery is trying to make it through tough times; her son, Jason, is morose and she’s struggling with her faith. Her husband, who had his own problems, has died and she cannot seem to communicate with her son.

Margery rents space in a devoutly religious church to run a puppet ministry for her son and two other youths. But if the class is supposed to serve as a healing experience, the independent-mindedness and evil nature of Tyrone, Jason’s puppet, threatens to throw the class into upheaval.

One might view Tyrone as representing the evil tendencies lurking beneath the scared, shaken but at heart good-natured Jason, who is reeling after his father’s death.

It would be easy to stress horror in “Hand to God,” especially with Halloween approaching. But Adler and his cast never make the play frightening for the sole sake of scares. Under Adler’s sensitive, thoughtful guidance, this cast finds the right balance between focusing on the comic, the pathos, the issues playwright Askins raises while integrating, but not overdoing the macabre.

Wesley Slade triumphs in the dual roles of Jason and Tyrone.

Slade makes it appear as though the puppet is its own entity -- even though it’s obvious he’s speaking the puppet’s lines and is in full view. There’s no easy way to hide the actor, and Slade makes it easy to suspend our disbelief.

Slade, who handles the puppet with ease, also excels in differentiating Jason’s meek voice and sullen expression with Tyrone’s sneaky, cunning sometimes growling and shouting voice.  Slade is convincing as a troubled, almost pathologically nervous and sad, lonely youth. However, Slade’s facial expressions could vary beyond the frowning face he too often wears.

Kristian Bikic finds the bad boy persona in Timothy, an impulsive, foul-mouthed teenager with a primitive demeanor. He walks and talks with a swagger that suggests a disrespect for authority. There’s clearly a bad “puppet” controlling this youth, who, as played by Bikic with slanty eyebrows, also has a hint of a sweet side.

You can envision this Timothy turning into, say, Stanley Kowalski of “A Streetcar Named Desire.” Still, you get the sense this troubled teen isn’t beyond hope. This duality helps reinforce the notion that we each have goodness and the inclination for evil within us.

Margery Lowe, who shares the first name of her character, invests the puppet ministry leader with a sunny, carefree, southern charm (think Dolly Parton). At least, Lowe conveys that demeanor on the outside. When the character is exasperated and vulnerable, Lowe makes us feel that sense of helplessness and hurt, especially when her son shuns her. The free spirit disappears, replaced by a helpless, exasperated, frustrated woman at wit’s end.

Casey Sacco fares well in the underwritten role of Jessica, another teenager taking the puppet ministry class. She conveys the mild-mannered sweetness of a plain, southern country girl and makes the character likable.

Pastor Greg tries to show sympathy toward Margery and the teens, and Stephen G. Anthony brings a mostly patient, understanding and spirited minister to the stage. Although he’s a preacher, Anthony never plays Greg as a perfect being. His Greg is a human being, who displays modesty, vulnerability and isn’t above a fierce temper.

In the play, Askins writes short, pithy lines of dialogue that convey an urgency among these characters. One of the most heartbreaking lines is when Jason refers to his mom as “poison” and won’t let her touch him or get near him.

The play has humor, and Adler and Co. display deft comic timing. In the beginning, you can’t help but laugh when the Tyrone, who is at his gentlest in the prologue, curses as though he thinks words such as “motherfucker” represent ever-day, proper speech.

There’s also violence in the play, including the appearance of blood, but Adler never allows the proceedings to become too graphic. The physical scenes are mostly handled with flair by fight choreographer Paul Homza.

We can fight it all we want, but there’s one question asked by Tyrone to which we must answer “yes” if we’re to be truthful.

“Do you think devilish thoughts?” he asks Jason. “Lemme get that one for you. Yes. Yes, you do.”