Broadway Won't Re-open Before May 30

Theaters To Remain Dark Into 2021 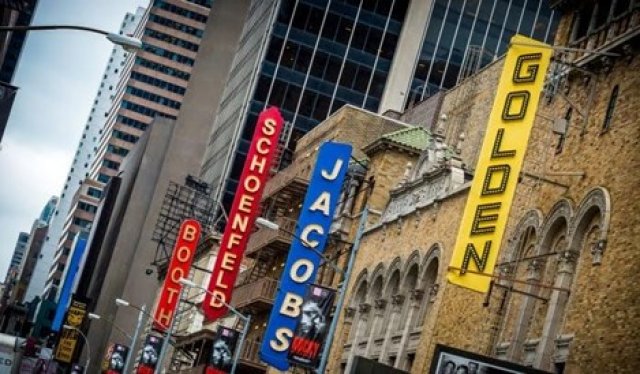 Broadway will now remain closed through at least nearly half of 2021 due to the pandemic, officials announced.

Ticket sales for Broadway performances in New York City are now suspended through May 30, 2021, the Broadway League announced on its website. Previously, its officials announced that Broadway would not re-open in 2020. Broadway League officials first closed theaters on March 12.  The league, a trade organization representing producers and theater owners, has repeatedly extended the cancellations, most recently through Jan. 3.  For those keeping count, May 30, 2021 will mark 444 days after all 41 theaters closed in an effort to slow the spread of COVID-19.

In the meantime, Broadway League President Charlotte St. Martin said the industry would open "as soon as conditions permit us to do so."

Also, Martin noted that 97,000 workers "rely on Broadway for their livelihood." Further, it provides an annual economic impact of $14.8 billion to New York City.

"We are working tirelessly with multiple partners on sustaining the industry once we raise our curtains again," St. Martin said. "As so many of us in the Broadway community have been saying during this time - 'We'll be back, and we have so many more stories to tell.'"

Theatergoers holding tickets for dates through May 30, 2021 "should contact their point of purchase for details about exchanges and refunds," Broadway League officials noted.

Meanwhile, the pandemic has also affected touring Broadway performances in theaters across North American. For more information, visit your show or venue's official website.  You can also visit https://tourstoyou.org.

Broadway officials have said that they project productions to resume over a series of rolling dates.

“Dates for each returning and new Broadway show will be announced as individual productions determine the performance schedules for their respective shows,” a Broadway League statement reads.

Due to the pandemic, Broadway officials suspended performances on March 12. At that time, 31 productions were running. That included eight new shows in previews. Additionally, eight productions were in rehearsals, preparing to open this past spring.