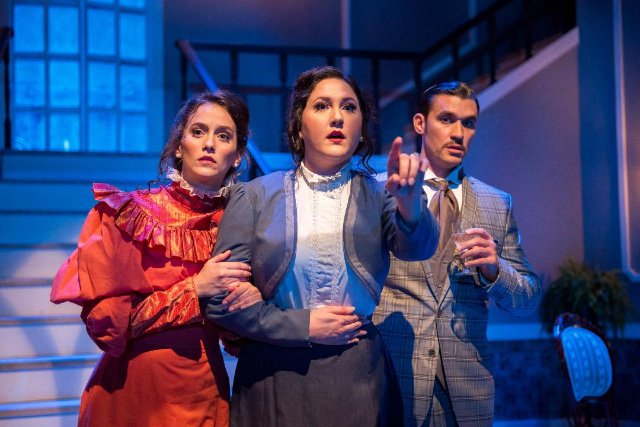 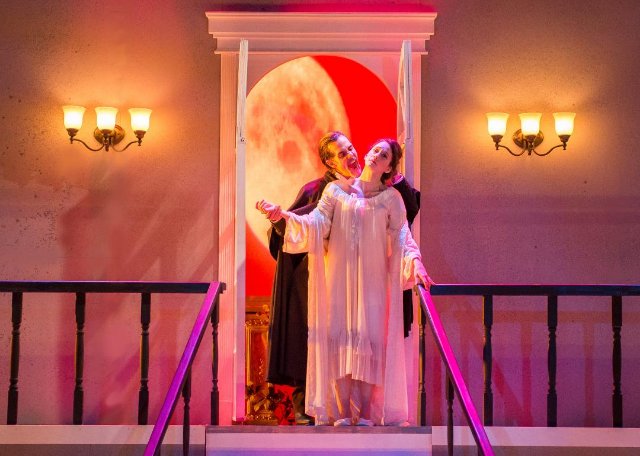 (Photo by Justin Namon) Count Dracula (Carlos Orizondo) prepares to take a bite out of a seduced Lucy (Isabella Lopez). 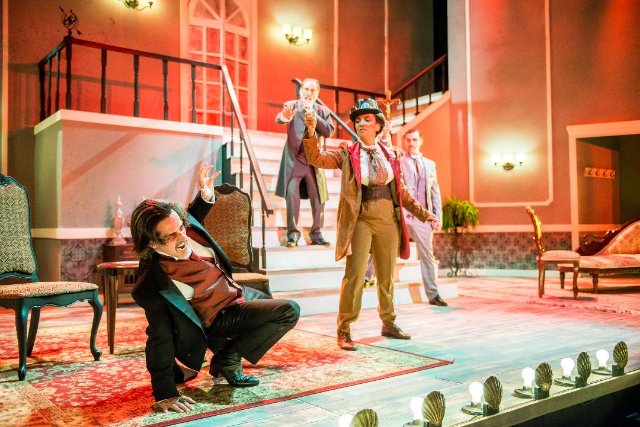 Up is down and right is wrong.

It’s a phrase that could describe today’s topsy-turvy world.

But in playwright Michael McKeever’s bold and imaginative re-thinking of Dracula, Bram Stoker’s 1897 Gothic horror novel, the phrase describes a quite favorable world. That is, if you’re progressive and care about causes such as equality.

To be sure, the multi-award-winning, prolific McKeever’s brand-new play is faithful to the source material. And yet, McKeever’s adaptation is nothing like the story’s fans would expect. It's a Dracula for modern times.

Indeed, you’re in for a gasp-inducing experience if you take in the world-premiere production of McKeever’s play. And that’s not just because of the story’s horrific, suspenseful nature.

Certainly, in the play, it’s a scary world for the power-wielding men. Of course, the tale is set in Victorian-era England, a time when the social hierarchy defined women as lesser beings.

How dare they even think that they have a mind of their own?

To predators such as Dracula and arrogant, close-minded people such as Dr. Seward, females are little more than sex objects, always bowing to their commanders.

So why, in McKeever’s vivid imagination, is this a time of horror for these controlling bullies?

The year 1897, the play’s setting, is near the Victorian era’s end. Therefore, it makes sense that the strong female characters see positive reform coming.

We palpably experience the grave danger in which Mina and Lucy find themselves. For much of the play, as in the novel, it appears as though these two are in a losing battle with Dracula. While the women, especially Mina, is assertive and strong, the Count is hardly impressed. By the devil, he will own them.

We sense an aura of danger from the beginning. McKeever, who writes poetically and with elegance, has eliminated a number of the novel’s characters to focus on those whose stakes are the highest. Of course, they include Renfield who, by all appearances, is a madman. But who are really the wackos in this unapologetically melodramatic tale?

Part of the versatile, quirkily-comical and insightful McKeever’s genius, at least in this play, is that he employs biting satire in a playful way, without excessive preachiness.

However, the writer’s main focus is the feminist bent he has employed. And nowhere is that more clear than in the character of Van Helsing.

Novelist Stoker named the scholar and expert in the dark arts Gabriel Van Helsing. McKeever has changed the first name to “E.W.”

Naturally, the old-fashioned Dr. Seward’s shocked when he first sees the renowned scholar.

When she first appears, McKeever has fun as he bitingly and again, with fun, satirizes Victorian society’s unbending expectations of a male-dominated hierarchy.

As strongly embodied by Karen Stephens, the South African born, black Van Helsing commands the stage fearlessly and self-assuredly. Meanwhile, Stephens finds compassion and urgency in the character, further endearing her to us.

There’s symbolism in Van Helsing’s costume, particular the shining goggles which her hat sports. One might see her as a person from the future who wishes to illuminate to the Victorian folks the progress and regressions made in society’s thinking since that time.

No doubt, McKeever has made this character an anachronism. So, too, is Mina Harker.

As Lindsey Corey skillfully embodies her, she’s reform-minded and forthright.

In short, she is, in the male characters’ words, a “new woman,” one with the gall to think that females can be independent and think for themselves. But during Mina’s final frightening confrontation with Dracula, Corey conveys, loud, clear and with spitefulness in her voice, that her character will never allow Dracula to own her. While Corey endows Mina with grit, she also conveys tenderness toward Lucy (a charming but fragile and more naïve Isabella Lopez) and Harker (a fiercely protective, excitable, but romantic Daniel Capote).

While this production is unpredictable, tense and scary, director Stuart Meltzer doesn’t overdo the horror. There’s more man than monster in Carlos Orizondo’s excellent Dracula. The actor, a short fellow with a thin, graying mustache and beard, dark eyes, as well as slicked black hair, stands regal, with an air of self-importance, narcissism and melancholy. He moves slowly, but sometimes when he departs from a scene, Orizondo's Dracula zips away as fast as a cheetah.

To be sure, there’s a low-pitched hiss or growl in his voice when he whispers menacingly at the women. However, there’s little in the way of monster make-up, maniacal laughter, fangs or claws – at least none that are particularly apparent, although he does shout with a thunderous, threatening voice at times.  There’s also authentic sounding thunder, which punctuates dramatic moments.

By contrast, a woman (Francesca Rossi), clad in black, plays the violin during some scenes. This reinforces a sense of the Count seducing the women, a la The Phantom of the Opera. The combination of the melancholy violin, a rumbling, tension-filled sound and suspenseful music might symbolize the chaos occurring in the narrative.

Speaking of disorder, several scenes involve shouting between Harker and Dr. Seward (a wide-eyed, arrogant, impatient David Kwiat). Unfortunately, some nuance is lost in the loud voices. Also, at times, the actors talk a little too fast.

Another shortcoming comes when Lucy returns to the living in an “Undead” state. She sounds too much like a human, not a vampire or ghost.

In addition, some of the staging is awkward. Particularly in the beginning, at least one scene transpires too long far stage left, which could make it hard for audiences seated on the opposite side to hear and see the actors.

On the other hand, the Carnival Studio Theater, in which Zoetic Stage performs, is intimate. This creates a visceral theatrical experience. We sense the characters’ emotions, which the actors portray authentically and they find appropriate physical ways to communicate their feelings for each other.

Generally, director Stuart Meltzer and the actors make good use of the stage, onto which McKeever’s opulent depiction of a stately dwelling rests. The dominant color is grey with black patterns. These colors perfectly reinforce the darkness of the tale. Also, Marina Pareja’s color- and period-appropriate costumes enhance the atmosphere, while Rebecca Montero’s vivid, stark lighting reinforces intensity and mood.

One would be remiss not to mention the authentic looking moon outside the double doors upstage.

What’s particularly striking is the moon against the backdrop of a red sky, further reinforcing the chaos in the tale.

At one point, Dracula basks in the howling of wolves, remarking that it’s like music to him. However, it can sound jarring to others.

Meanwhile, “Up is down and right is wrong,” might have a similar effect on our ears. But at least to the reform-minded women in McKeever’s new play, this phrase is music to their ears.

The world premiere of Michael McKeever’s Dracula continues through Oct. 28 on the Susan Westfall Playwrights Stage within the Carnival Studio Theater at the Adrienne Arsht Center, 1300 Biscayne Blvd. in downtown Miami. Show times are 7:30 p.m. Wednesday through Saturday, as well as 3 p.m. Sunday. For tickets, call (305) 949-6722 or visit www.arshtcenter.org.