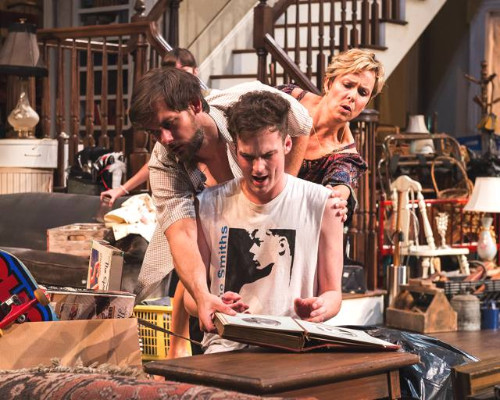 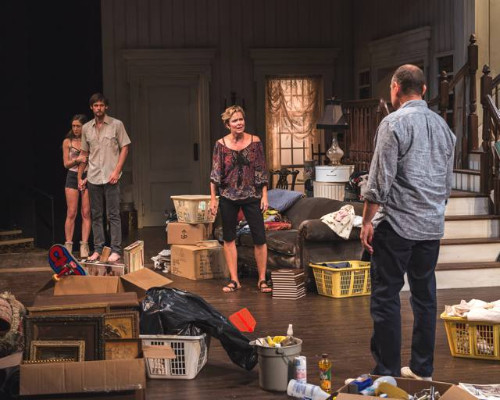 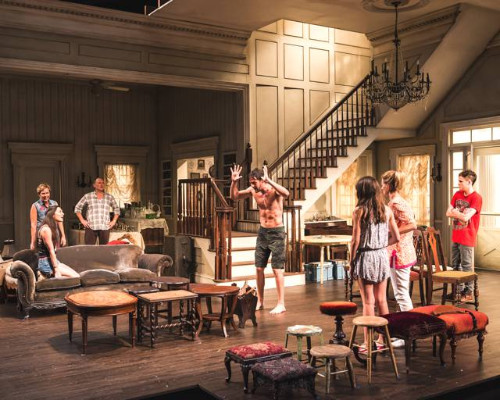 Dysfunctional families have always been low-hanging fruit as subjects for stories, plays, movies, TV series, and novels for centuries. And why not. It’s reflective and resonates everywhere as to the foibles of families and a continuing fascination with the human condition.

Broadway and the movies for years made hefty profits off the behavior of flawed families and their secrets. The darker and quirkier the secret the more audiences clamored for tickets to watch avatars of themselves or, perhaps, someone they knew.

One has to go back only a few Broadway seasons to remember the awards heaped on “August: Osage County”, a comedic-drama that celebrates: alcoholism, drug addiction, adultery, incest, and a few lesser venial sins; all within one family who hurl more than 50 f-bombs from the stage, by its various characters, into receptive audiences.

The Mark Taper Forum is currently presenting “Appropriate”, a dark comedic drama written by Obie Winning playwright Branden Jacobs-Jenkins and directed by Eric Ting. For some audiences watching the play it must feel a little like driving past a roadside traffic fatality. We know we shouldn’t stare at the tragedy, but it’s so damn fascinating and riveting that it’s difficult to take one’s eyes away from the mayhem.

In the case of the Taper’s production it’s all about how each family member reacts to secrets revealed following the death of the family patriarch. It’s an old reliable format that allows the audience to see those dysfunctional family foibles up close and personal; where all get to ‘gunny sack’ one another over real or imagined slights that go way back and where all get to play the blame game.

I was reminded of the deliciously rueful comedic line delivered by Eleanor of Aquitaine, in James Goldman’s brilliant comedy drama ‘The Lion in Winter’, when she deadpans to the audience: “What family doesn’t have it ups and downs?” The formula worked in “Dividing the Estate”, “Daddy’s Dying Who’s got the Will”, and to some extent “Cat on a Hot Tin Roof”. The first two being comedies, and the latter a drama.

Playwright Jacobs-Jenkins is a storyteller who has a great ear for 21st century dialogue in America. In the hands of a very talented ensemble cast and its director, the play transforms a dense and very talky play into one that makes sense, despite that fact that we know where this story is going. Yet, we’re still intriguingly on board to the end.

When it comes to a brief overview of the story and what takes place on stage, perhaps, one word may be helpful in understanding the main characters’ shenanigans and actions: Baggage. Everything flows from their baggage. We all have it but only the flawed Lafayette family has it spades. Spoiler alerts make it difficult to summarize. But as I said before, we know where the narrative threads are headed, now it’s a matter observing these flawed people flail and wail. They don’t have a clue as to how traditional families function.

That’s one of the interesting and appealing aspects of “Appropriate”; that, and the stellar performances of the eight member ensemble cast. One gets to appreciate the exhilarating display of individual brilliance within a team framework. Ensemble casts need generous actors to pull it off. With that said, special mention must go Melora Hardin as Toni Lafayette, the titular head of the family who must run everything without being challenged. Everything is always all about her. She’s the sort of character audiences love to hate. She gets on everyone’s nerves with her irritating superior attitude including her brother Bo Lafayette (David Bishins), who isn’t that confident about challenging her on touchy family issues. Robert Beitzel as Frank, her flaky son, and his outlier girlfriend River Rayner (Zarah Mahler), who is not buffaloed by Toni’s bellicose attitude and. manner, and Missy Yager as Bo’s fiesty wife Rachel, are outstanding. Solid support comes from Will Tranfo, Grace Kaufman, and Alexander James Rodriquez (the performance I attended; the part is rotated with Liam Blair Askew).

It’s been some time, however, since I’ve seen a three-act production. They just don’t write that many anymore. Our millennials have short attention spans which producers normally understand, but hope springs eternal when trying to capture audiences for the future.

The technical team led by director Ting features a picture–perfect southern plantation home which has the look and feel of a lived-in home wonderfully designed by Mimi Lien. Lights by designer Christopher Kuhl; costumes designed by Laura Bauer, with sound by Matt Tierney, lend a ring of authenticity to entire production.   I was puzzled however, by the opening of the play, which begins in darkness preceded by a prolonged loud buzzing sound lasting about 30 to 40 seconds, and is repeated and the end of each scene and at the end of every act. (humm?) The audience (and me) could benefit from a program note clueing us in. Is it playwright dictated or director’s POV.

“Appropriate” performs at the Mark Taper Forum and runs through to November 1, 2015.