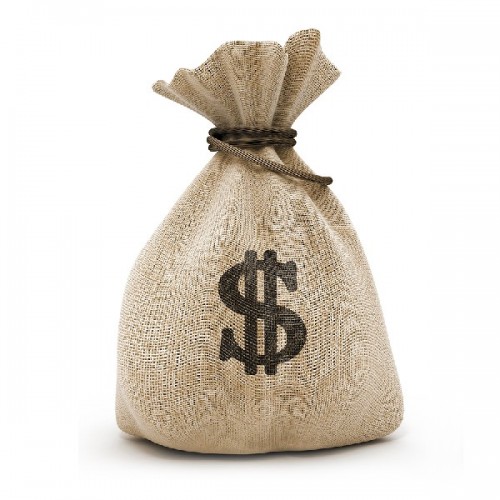 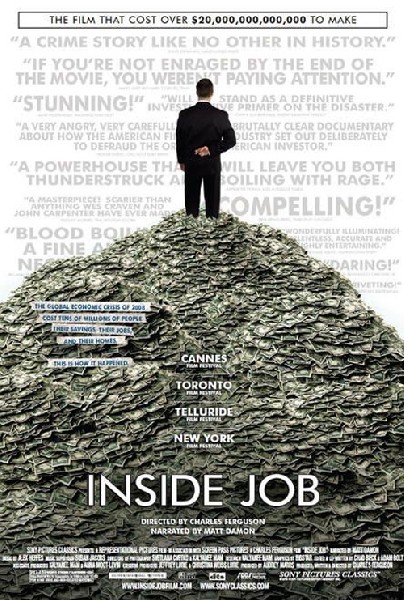 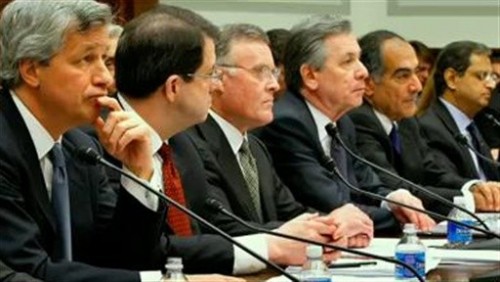 A Group of Major Bankers Overdrawn Before Congress 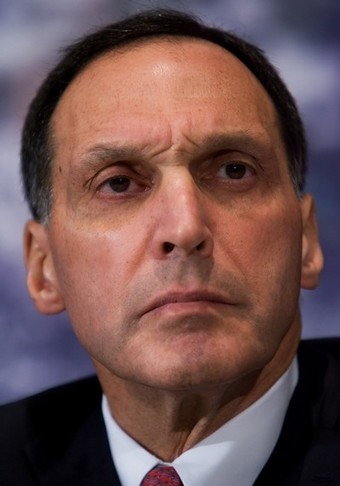 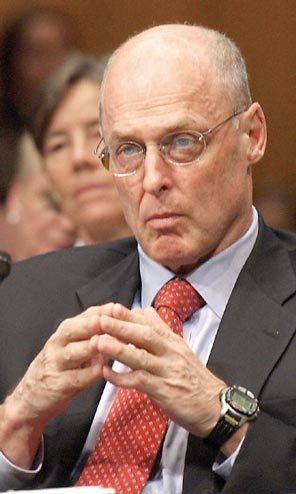 Inside Job
A Documentary by Charles Ferguson
Narrated by Matt Damon
Starring Many of those responsible for the 2008 Financial Meltdown and Others who did nothing about it.

Naively, I thought that after the 2008 financial meltdown, our priorities would reflect a better value system. Greed and financial chicanery would  be superseded by a revaluation upward of things that counted like quality of life issues, a more balanced reward system among professionals who actually provided real services, and punishment of egregious financial manipulators. Unfortunately, I was wrong. Instead, millions have suffered worldwide, and in many cases the guilty have been rewarded.

The term "inside job" refers to  a crime, usually larceny, robbery or embezzlement committed by a person of trust. This person is authorized to access a place and  procedure with little or no supervision. The perpetrator can also be a former employee who still has specialized knowledge or privileged access necessary to committing the crime more easily. This definition works for the 2008 Meltdown.

Inside Job is a must-see documentary film by Academy Award nominated director Charles Ferguson that focuses on the 2008 financial crises. The money/credit mess was created by the arrogance, greed and downright criminal behavior of those involved at the highest levels of the financial markets. Ferguson has done a magnificent job presenting the what, why, and how of the fiscal mess.

Charles Ferguson not only clearly explains what happened, the loss of nearly $20 trillion from the world's economy, but he continually reminds the audience that actual individuals were responsible who were, and still are, often highly rewarded for their mostly improper, non-regulated actions or inactions. The director also tells about the millions of workers and retirees around the globe who have been damaged by the crisis.

Only a handful of academics were coaxed to speak on camera. The "smart guys" like former Secretaries of the Treasury Henry Paulson, Robert Rubin, and Lawrence Summers, as well as, former Federal Reserve Chairman, Alan Greenspan, and current Chairman Ben Bernanke refused to be interviewed. Dick Fuld, the last chairman of now defunct Lehman Brothers was mum as well. Those who actually allowed themselves to be filmed were cryptic at best and non-communicative at worst. These included a  clueless, former Federal Reserve Governor Ric Mishkin who is now on the faculty at Columbia University and the rather defensive, former Bush Chairman of Economic Advisors, and the current Dean of the Columbia Graduate School of Business, Glen Hubbard. Though perhaps not the worst villains in the painful story, both will regret being filmed.

Along with a rather smarmy Martin Feldstein, another shape-shifting academic (Harvard), corporate board member (AIG), and governmental advisor (Presidential economic advisor), each of the individuals who actually spoke were defensive and said as little enlightening as possible. It seemed that everything was all right as long as these guys all got well paid. Moral compass, professional ethics or conflict of interest--what were they? Apparently, elite economists suffer little from conflicts of interest that mere mortals suffer from. Investment bankers get rewarded for the volume of their work not necessarily the value.

If you don’t really understand what happened during the financial crisis, Inside Job clearly explains it in layman terms. The whole market is a big gamble. This is true at the highest levels of the investment banking world. There are a series of gambling instruments that this world uses to make money, not necessarily for individual investors.  Terms like derivatives and their swaps, futures and options varieties are simply explained. A credit default option (CDO) is an option to buy protection (payer option) or sell protection (receiver option) on a specific referenced credit with a specific maturity. This is a tricky piece of insurance. AIG was involved in these transactions and almost went bankrupt trying to pay off the investment banks. The Federal Government bailed AIG out dollar for dollar at $120 billion. CDO's are like betting against and for a share to gain value, a bit like betting with the "house" and against the "house" for the share to lose value at the same time as betting for it to gain in value. This isn't fair. It seems to be cheating. AIG executives saw nothing wrong in what they did and proceeded to give themselves outrageous bonuses.

The whole process was used to manipulate the overvalued, unregulated, and unqualified mortgage industry. Mortgages were packaged, transferred, traded and basically bet on. The result is millions of foreclosures. This is because of how the mortgages were written with veritable and often hidden rates, massive job losses, greedy lendors, and  underqualified lendees. No one but the home buyers seemed to get punished.

Inside Job is not just a documentary about a one-off nearly cataclysmic event, but a grim tale about greedy and deceitful individuals who took part in an irresponsible series of financial manipulations that ended up punishing nearly the whole world. I was once told that economics is the science of predicting the past. It seems true. We study history to not make the same mistakes as the past. Inside Job is our recent and terrible history.