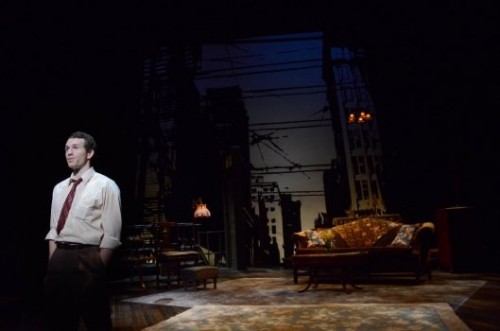 Tennessee Williams’ play The Glass Menagerie is, on the surface at least, a simple play. It tells a small story, the story of the broken and desperate family the narrator, Tom Wingfield (Fisher Neal) abandoned to pursue adventure in the Merchant Marines and an eventual career as a writer. Tom opens the play by telling us it’s a memory play, and being a memory play it is “dimly lighted, sentimental, and NOT REALISTIC,” and therein lies the complexity within Glass Menagerie’s deceptive simplicity.

For the trick to a good production of this play – and the one at the Pittsburgh Public Theatre falls squarely into that category – lies in finding a style for representing memory, one that keeps in view not only the events as remembered by Tom, infused and informed by his guilty conscience over having left his overbearing mother and fragile sister to their own devices, but also the reality of the characters themselves, distinct from his memory somehow, so that we in the audience don’t fall into the trap of only seeing the other characters as Tom remembers them.

That is to say, we need to be able to experience his mother Amanda (Lynne Wintersteller) and sister Laura (Cathryn Wake) as simultaneously the two-dimensional characters his memory has reconstructed in an attempt to rationalize and justify his escape from them, and as the three-dimensional figures who continue to haunt him and demand his attention and care.

It’s not easy to pin down exactly how the creative team, under Pam Berlin’s intelligent direction, has achieved this delicate needle-threading. It starts with Michael Schweikardt’s terrific set, in which the period-specific Wingfield living room is backdropped by a two-dimensional cityscape silkscreened (or painted? I spent much of intermission trying to figure out just how this scenic feature was made!) on a seamless screen, which in turn is framed by silhouette cutouts of fire escapes. What is memory, if not simultaneously as sketchy as that backdrop and as perfectly detailed as that living room?

Rui Rita’s lighting design makes Schweikardt’s canvas glow with the requisite “dim” and “sentimental” lighting and allows for a fluidity between scenes that matches the way memory elides over gaps, catching just the highlights. And the costuming, likewise, offers a glimpse into the way memory allows us to caricaturize the people and events from our past, particularly when Amanda breezes into the living room in a dress from her youth that can only represent Tom’s meanspirited, vengeful reconstruction of what she might actually have worn. By creating a world that is simultaneously detail-rich in some of its elements and sketchily cartooned in others, the designers provide space for Williams’ rich and psychologically intricate story.

In telling that story, the ensemble of four actors (the cast is rounded out by Jordan Whalen as the ambitious, fumblefooted Gentleman Caller) makes subtle but effective shifts in stylistic register throughout the play. As the “present-day” narrating Tom Wingfield, Neal plays it straight and understated. But when we’re in his memory, he’s just enough overblown to make clear that this is “NOT REALISTIC” but rather a re-creation: his past self, as remembered, is not always one of which he seems particularly proud. And though his memory may wish to exonerate him, it fails to do so completely, for while at times we see his mother as the nagging busybody from his memory who makes it impossible for him to enjoy a meal or a cigarette, at others Wintersteller’s emotional authenticity resists his memory’s judgment and demands that we recognize and sympathize with where she is coming from, as a single mother burdened with worry about her daughter’s future.Wake’s portrayal of Laura reveals not only the loneliness and despair that Tom remembers, but also an inner strength and peace that seem to elude Tom’s perception.

The result is a production that reveals Williams’ play in all its glorious psychological complexity, as we witness not only the tragedy of Laura’s heartbreaking insecurity and Amanda’s deep disappointment and sense of failure, but also Tom’s enduring feelings of conflict and guilt not just for having escaped, but also for his less-than-generous portrayal of the loved ones he left behind.

Reposted courtesy of Wendy Arons and the Pittsburgh Tatler.