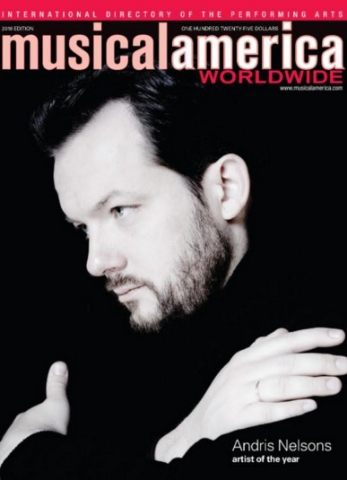 Andris Nelsons, Artist of the Year 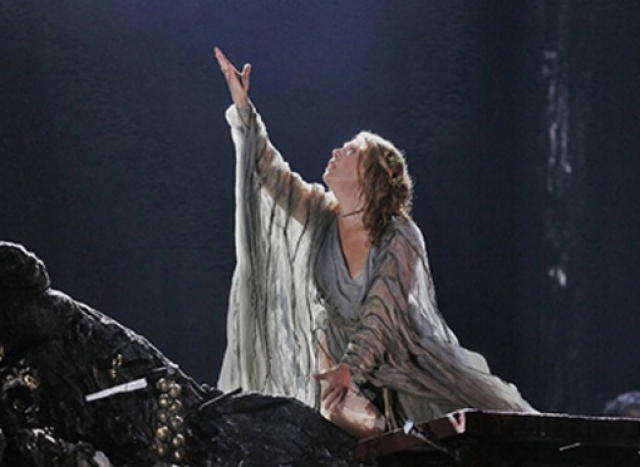 The prestigious Musical America annual awards have been announced.  The BSO musical director Andris Nelsons is artist of the year. Sondra Radvanovsky is vocalist awardee.  We interviewed Nelsons in the spring of 2011 before his first concert with the BSO at Carnegie Hall.  Radvanofvsky has been on our radar since Peter Gelb tried to oust her and Placido Domingo stormed into Gelb's office and told him he could not remove so important an artist from the Met roster.

Artist of the Year: Andris Nelsons
Boston Symphony musicians still talk about Andris Nelsons's first concert with the orchestra, in the spring of 2011. He had stepped in on a moment's notice for indisposed Music Director James Levine in the Mahler Ninth Symphony at Carnegie Hall, and a certain "chemistry" was unmistakable. Further concerts cemented the relationship, and in May 2013, the venerable orchestra announced his appointment as music director, beginning the following year.

Born in Riga in 1978 into a family of musicians, Nelsons was 5 years old when he was taken to a performance of Wagner's Tannhäuser, an experience he considers the pivotal moment of his young life. He began his career as a trumpeter in the Latvian National Opera Orchestra before studying conducting. He was music director of Britain's City of Birmingham Symphony Orchestra from 2008 to 2015, principal conductor of the Nordwestdeutsche Philharmonie in Hereford, Germany, from 2006 to 2009, and music director of the Latvian National Opera from 2003 to 2007. His contract with the Boston Symphony has currently been extended through the 2021-22 season.

In addition to his Boston position, in February 2018 Nelsons becomes Gewandhauskapellmeister of the Gewandhausorchester Leipzig, in which capacity he will bring both orchestras together for a unique multi-dimensional alliance that includes tour appearances by each ensemble in the other's home city, commissions of new works, musician exchanges, and programming that highlights each organization's historical legacy.

Nelsons's work with both orchestras will be documented by an ongoing collaboration with Deutsche Grammophon. With the BSO, he will record a cycle of Shostakovich's 15 symphonies, the opera Lady Macbeth of Mtsensk, and other works by the Russian composer. The first two releases of symphonies both received Grammy Awards for Best Orchestral Performance. In Leipzig, Nelsons will record the nine Bruckner symphonies, many of them paired with works by Richard Wagner. The first in this series, of the Third Symphony and Tannhäuser Overture, was released earlier this year. The nine Beethoven symphonies will be recorded with the Vienna Philharmonic in advance of the Beethoven year in 2020. Moreover, he continues his recordings for the BSO Classics label with the four Brahms symphonies, recorded live at Symphony Hall in November 2016 and recently released. Nelsons also maintains regular collaborations with the Royal Concertgebouw Orchestra of Amsterdam, the Berlin Philharmonic, the Bavarian Radio Symphony Orchestra, and the Philharmonia Orchestra. He has also been a regular guest at the Bayreuth Festival and at the Royal Opera House, Covent Garden, where he conducts a new David Alden production of Wagner's
Lohengrin this season.

Sondra Radvanovsky Vocalist of the Year.

Sondra Radvanovsky is the Norma of our time. "Last season at Lyric Opera of Chicago," writes critic Wynne Delacomo in her tribute, "her Norma soared and swirled effortlessly through Bellini's vocal ornaments, but her voice became a bone-chilling tidal wave of fury as the high priestess ordered her people into battle." A headliner at the world's major opera houses, Radvanovsky is the compleat opera singer. Her soprano is powerful, agile, and capable of infinitesimally subtle nuance. In 2015-16, singing all three of Donizetti's beleaguered British queens--Ann Boleyn, Mary Stuart, and Elizabeth I--she scored a kind of operatic Triple Crown to great acclaim in a single season at the Metropolitan Opera. Her future will hold some new operas, including Tchaikovsky'sPique Dame, but she also wants to revisit such roles as Luisa Miller. "It's so great to have this plethora of great roles to choose from," she says. "I've got the best job in the world. I get paid to do what I love."

Educator of the Year is Francisco Nunez.