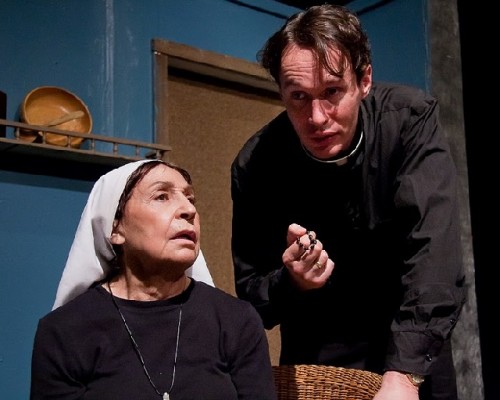 
Mario Fratti known the world over by most theatre folk as the man behind the Broadway musical and the movie "Nine" -- it was  Fratti's adaptation of Fellini's hugely popular Italian film "8 BD" on which the Broadway musical and film were based--is the perfect example of one's own fame overshadowing the core of their life's work. What many people do not know, having been blindsided by the limelight of "Nine" has brought to the playwright, is that Mario Fratti has written some 80 plays which have been performed  around the world in 19 languages in over 600 theatres. And those are just the ones that have been performed. No doubt, the prolific Italian master of mystery, iconographer of irony, has a great many more plays waiting to be born. Perhaps the Signature Theatre should dig a little deeper and consider a Mario Fratti retrospective.

Meanwhile, for those who want to savor the playwright's Italian American touch, a medley of amuse bouches, "Trio," three of Fratti's one act "Anniversary" (1994), "Missionaries" (2002), and "Blindness" (2004), is holding court, through October 24, at the Theatre for the New City in the East Village. "Anniversary," the first and most otherworldly play on the bill--a thriller to say the least--builds slowly and quietly and then when you least expect it, the playwright, utilizing his resident signature, gives you  a triple wallop. Performed around a long and elegant dining room table,  the play opens with a father (Patrick McCarthy), tended by an all too quite black servant (Sean Phillips). He is celebrating the birthday of his daughter (Jennifer Loryn) who only comes to see him once a year. The explosive and tightly controlled dialogue between father and daughter is crisp, dangerous, and uncomfortably sexual. Waiting for the fireworks to come had me  sitting on the edge of my seat.

"Missionaries," the middle play of the evening, starring, a very wooden-faced Rose Gregorio as the declamatory Sister Caterina, partnered with Father Edwards (Chris Kerson), a young lugubrious priest with rampant gonads for the opposite sex, is less a mystery, than a black comedy raised to melodramatic heights by a series of near-predictable revelations, each  one more jaw-dropping ridiculous than the next. Still, the seriousness of  the actors in interpreting what is essentially an old hat story with a  couple of twists and turns--they should have played it camp or as a farce with many doors, which is how Charles Busch would have handled it with great  effect--all but curbed my laughter until after the play ended. Still, when I think of each over the top event, humorously (at least to me) piled on top of each other, with a heavy hand, I find myself pleasantly chuckling.

The most memorable and most beautifully acted play of the evening, definitely begging for expansion into a full length play, a made for TV movie, or perhaps even a full-length film, is "Blindness." Though the subject matter is familiar, "a soldier home from Iraq pays a visit the family of his best friend and war buddy Jim who was killed in action" here the playwright's writing--still utilizing a couple of surprise twists--as well as the believability of the actors, catch the deepest emotions of each  character. From the pro-war father Anderson (Joe Ambrose) who hides the pain of  losing his son while ranting about the "necessity to eliminate the enemy, the ones that threaten our liberty, our democracy," to Brian (Brendan McDonough) the war-blinded Irag veteran who was so convincingly blind that I am still not sure that he isn't, to Brian's young wife Cathy, sensitively played by Rachael McOwen with the just right degree of innocence and knowingness, and Billy Marshall Jr, plays Anderson's young and sole surviving son, with the perfect mixture of brashness and hangdog, each actor hit the right notes.

On the technical end, nonetheless equally impressive, is the work of set designer Mark Marcante, set detail Zen Mansley, and lighting designer, Alexander Bartenieff, whose peerless ensemble work, on a stage with three distinctly designed acting areas, fit each play like a glove.