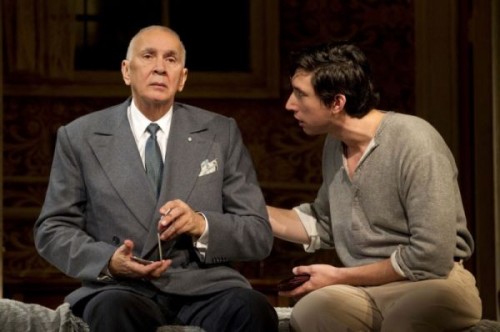 Father and son as played by Frank Langella and Adam Driver. 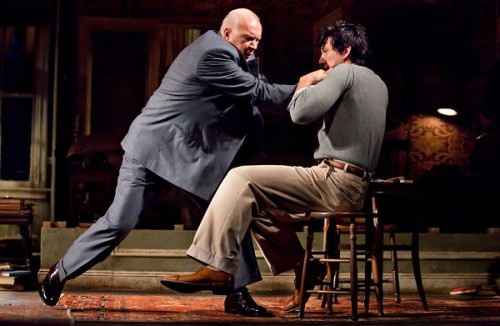 After just 69 performances in London and 54 on Broadway, in 1963, Man and Boy was swept into the dust bin of theatrical memory.

When Man and Boy was staged Rattigan had become a signifier of an outdated fixation on the manners and morals of the upper middle class and aristocracy. British theatre was in the midst of the emergence of the rude boys dubbed the Angry Young Men led by John Osborne and Kingsley Amis. They were bringing grim dramas of the underclass to the stage. Rattigan embodied everything that they rebelled against.

While critics conclude that Man and Boy is not among his best works it is being revived for two compelling reasons. The uncanny similarities between the downfall of a ruthless global financier, Gregor Antonescu, based on the life of Ivar Kreuger,  the Swedish Match King, and the ponzi scheme and downfall of Bernard Madoff. And a vehicle for a compelling, broad brush portrayal of him by a bankable Broadway favorite, Frank Langella.

The drama which is set in the 1930s, in its evocation of the Madoof scandal, feels less like the revival of a period piece than a ripped from the headlines romp.

It is the sweeping, magnificently large and overstated performance by Langella that provides the glue to congeal this otherwise flimsy and fragile concoction. The cast and advancing plot line serves as expendable resources to prompt Langella to pull ever more glib rabbits from his well stocked bag of theatrical tricks.

The two women, Virginia Kull as Carol Penn, the girl friend of Gregor’s estranged son Basil Anthony (Adam Driver), and Francesca Faridany  as Countess Antonescu, are superfluous to the point of being expendable. They are little more than female pawns for Gregor to manipulate. There is virtually no depth to their characters.

The play opens with the nude Kull in bed. It is a wonderfully rendered, vintage, grungy, poetic Greenwich Village basement apartment created by Derek McLane. As she begins to speak we are absorbed by a uniquely lilting, Irish accent. While pulling a sheet around herself Carol engages in a conversation with the musician boyfriend who is dressing in a tux for a gig as a pianist in a bistro.

A man enters who is the right hand man of Basil’s father (Michael Siberry as Sven Johnson). It seems that Gregor, whom Basil last spoke with five years ago, is on the run and looking to hold a clandestine meeting away from the police and media.

There is friction as Basil is not anxious to see his father for reasons that will evolve during the play. There is also conflict about the tarnished but powerful bond between them.

Having laid the ground work we are ready for Gregor’s sweeping entry. Langella immediately dwarfs the set and everyone on it with his enormous theatrical presence. With restraint he starts at a low key and understated pace. He begins by derisively surveying the squallid terrain. Scoping out who and what he has to work with and manipulate. Starting with an awkward interaction with his son whom he must both mollify for years of neglect and abuse, as well as enlist in a fast developing, desperate, last ditch scheme to extricate himself from impending disaster.

He is briefed by Sven with some exploitable information about an uncooperative business associate, Mark Herries, played by Zach Grenier. Sven has unearthed evidence that Herries is a closeted gay whose kept lover committed suicide. It was a scandal which Herries avoided but a trump for Antonescu to use in their pending meeting. A merger has fallen through because during a check of Antonescu’s finances it came to light that he has cooked the books with unaccounted millions.

By blackmailing Herries into informing the media that the merger is still under consideration Antonescu gambles that he will yet again avoid catastrophe.

Deftly he dispatches his son’s girlfriend. Then he sets the scene for the impending arrival of  Herries. This entails a bit of tidying up as well as manipulating the lighting and potential seating arrangements.

Reluctantly Basil is drawn into his father’s scheme. It seems his birth name was Vasilly. During the traumatic break several years ago he assumed a new identity. Gregor shamelessly uses his son as bait to ensnare Herries in the impending meeting.

The father insists that his son change from the tuxedo into more casual attire. He selects slacks and then a rather flashy, gaudy shirt to match. It was a gift some years before and not in Basil’s taste. But it accessories the gay fantasy that Gregor is concocting.

Sensing the disaster catapulting forward with reckless momentum, as a member of the audience, we have difficulty comprehending why, after so much damage, Basil allows himself to be ruthlessly manipulated by his father.

Gregor also helps himself to Basil’s booze which, with contempt, he notes is confined to bourbon and gin. Having polished it off Basil is dispatched to get another bottle.

The meeting with Herries is the fulcrum of the drama. Here Langella is in full bloom.  It is played so brilliantly that we find it plausible that Herries will be duped despite the protestations of the accountant David Beeston played by Brian Hutchison. The ever more frustrated bean counter insists that figures tell the tale of unaccountable assets. Including the true value of bonds issued by the government of Antonescu’s good friend, Benito Mussolini. Gregor is on a first name basis with all of the significant heads of state.

To shore up the fast sinking ship Antonescu is “borrowing” liberally from the charity in his name managed by his wife The Countess. It is a title that he bought for her as well as the jewels and designer gowns that affirm her ersatz social status. She appears and is discarded. The performance by Faridany evoked Ivana Trump and that ilk of pampered trophy wives. Pushed to the edge he becomes enraged by her greed reaching the emotional high point of Langella’s well orchestrated arc.

While Langella dominates the inevitable spiral of collapse and ruin the performance of Siberry as Sven is masterful in keeping up with every twist and turn. Together they are a great pair with compelling synergy.

By the end of the drama all the king’s horses and all the king’s men can’t put Gregor together again. We have mixed responses to the demise of such a ruthless monster. There is just a glancing reference to all the lives that are ruined by the collapse of his financial empire and ersatz charities. But also a grudging admiration of a Nietzscheian Superman larger than life with self absorbed contempt, not just for the common man, but the few who actually love him.

Langella provides a commanding, remarkable performance in what is surely a slight and forgettable drama from a once celebrated and now neglected British playwright.

Without the Madoff hook it is doubtful that this revival would ever have seen the light of day. But for classic, over the top Langella, this was a compelling, absorbing and entertaining evening of theatre.