The Resting Place by Ashlin Halfnight 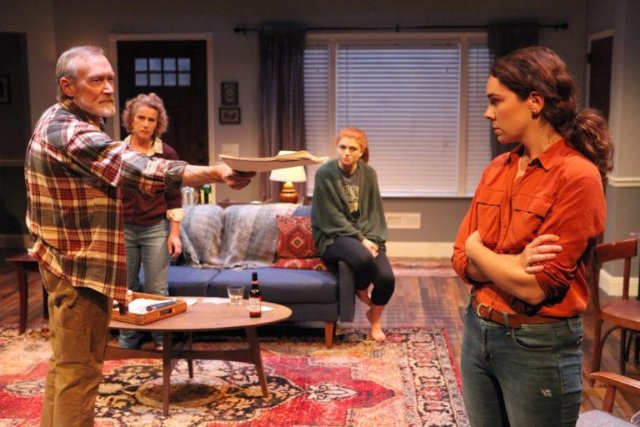 When a monster perpetrates acts against defenseless others, the attention understandably focuses on the evil one and the victims. But the consequences of those acts ripple beyond to the families of the victims and the community at large. Ashlin Halfnight’s searing, insightful, and timely world premiere, The Resting Place, addresses the anguish of the perpetrator’s beloved, whose reputations and relationships are forever tarnished. Magic Theatre and director Jessica Holt extract every ounce of the power of this gripping drama of our time.

Annie is a social activist living in San Francisco with a husband and young kids. Sister Macy is a political consultant in New York. In response to horrors committed by older brother Travis, they return to their parents home in Detroit. The seeming harmony of this family cluster quickly disintegrates when they find disagreement on how to proceed in dealing with a grim future as their social and economic stability shatters. Friendships, clients, jobs, and even day-to-day activities like shopping are threatened.

In our current time, heinous crimes hit the headlines almost daily, and some repercussions are obvious and predictable. But how do the families and friends closely identified with the criminal deal with the stain that they suffer by association.

Four different strategies are adopted the family members. One is consumed with rage and wants to put the incidents to rest as quietly as possible. Another sees a problem to be solved without any moral conviction behind finding the solution. A third seeks the haze of alcohol to dull the pain. But while those three positions can work in alliance, the final strategy is to delve, to explain, and try to resurrect a remembrance of Travis as a loving human being who somehow misfired.

Some actions are easier to support by those who can escape to another world and don’t have to live in the community where the bad deeds were committed. To a great extent, where these family members stand is informed by where they sit.

As the family clashes over what to do going forward, clues are unearthed from the past – a letter that is left behind, dangling conversations, the ominous looks on Travis’s face in pictures from his boyhood. Could his deviance be anticipated? Who knew what and when? Why didn’t they intervene? Was there an unwitting enabler?

The playwright touches a tender nerve with his exposé. So many bad actions by people in our real world have been telegraphed to others before they occurred. Antisocial attitudes. Deviant behavior. Threats. Fascination with the perverse. Collections of weapons. Memorabilia of cruelty. But how can one know at what point to interfere? And what does one do? Even the best trained cognitive scientists can only infer that something bad is likely to happen, not that it will happen with certainty. And one’s inferences alone are inadequate to have a suspicious person locked up. And what are the consequences if one acts against a perceived threat and turns out to be wrong?

Another theme depicted is that of stolen self-determination. We all want to exercise control and take responsibility for our destiny. However, life can be unfair. Some develop asthma; others are blessed with physical beauty; and rarely, one can throw a 100 mile per hour fastball. But sometimes, even the opportunity to make the best of whatever one’s own endowments is lost because of association with someone else. The Resting Place probes that pain of deprived agency with a sharp blade.

The play is full of tension, and critical details about relationships unfold throughout, adding new layers of complexity. Interestingly, and appropriately, some revelations and accusations are left unresolved. Just as in real life, we know outcomes, but we can’t always trace the attributable path that led to them. Halfnight has created a story whose lessons will be hard to forget.

The cast is exceptionally strong. Central to the plotline is the explosive belligerence that afflicts the relationship between father and daughter. The pressure of events weighs palpably on the father, Mitch. Played by James Carpenter, the irritable and inconsolable father tries to pick up the pieces and find the way forward any way he can. Annie is portrayed by Martha Brigham, who shows the steely determination to do right by her brother. Driven by principles, she dismisses the concerns and viewpoints of others, which trigger the pyrotechnics. Emily Radosevich as the other daughter, Macy, reflects the impatience of one who wants to get away. Constantly on her cell phone with her campaign staff, at times, she is mentally absent. Emilie Talbot as Angela shows the anguish of a mother who delivered a plague on the world, but often conceals her anxiety with sarcastic wit.

The Resting Place by Ashlin Halfnight is produced by Magic Theatre and plays at their stage in Bldg. D at Fort Mason Center, 2 Marina Drive, San Francisco, CA through November 4, 2018.