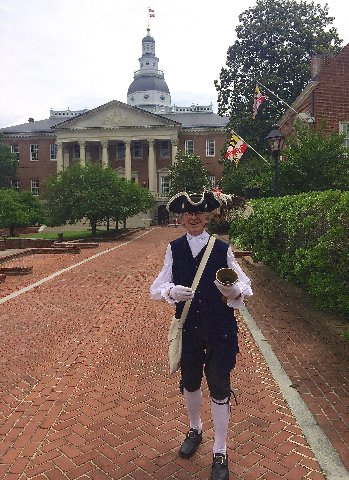 One of the loveliest and most historic cities in the United States is Annapolis, Maryland, incorporated in 1708 and the capital from November 1783 until August 1784. When visiting, and stepping back to the 18th century, what could be more appropriate than listening to all the news from the Internet of that day…a towne crier? Criers traditionally carry a handbell to attract people's attention, as they shout the words "Oyez, Oyez, Oyez!" before making their announcements. (The word "Oyez" means "hear ye," which is a call for silence and attention.)

Any trip to Annapolis has to include a trip to the United States Naval Academy. (Security is very tight at the Academy and visitors should check http://www.usnabsd.com/for-visitors/ ahead of time to make sure they have the right identification.) A variety of walking tours are available, and guides talk about midshipmen life and provide commentary on the major attractions in the Yard, including Bancroft Hall (the largest single dormitory in the world), Memorial Hall, Statue of Tecumseh, Herndon Monument (famous for Herndon Climb), Main Chapel and Crypt of John Paul Jones, Revolutionary War naval hero.  The remains of John Paul Jones were interred into the crypt beneath the Naval Academy crypt in 1906 in a ceremony presided over by President Theodore Roosevelt. As you walk through, look for the famous flags of the U.S. Navy and captured flags from enemy ships. The most famous, displayed in Memorial Hall, is the "Don't Give Up the Ship" flag flown by Commodore Oliver Hazard Perry at the Battle of Lake Erie on 10 September 1813.

The Maryland State House is the oldest state capitol in continuous legislative use (since 1772).  During the day, it brim with activity House, brims with activity, but it may be at its most evocative when the last person leaves and a lone figure stands within…a life size statue of George Washington, posed on the spot where he resigned his commission to the Continental Congress on December 23, 1783, after the successful completion of the Revolutionary War. and Washington’s personal copy of his resignation speech is on display in its rotunda. A lightning rod on top was installed as instructed by its inventor, Benjamin Franklin. On the grounds is a statue of Maryland native Thurgood Marshall, the first black U.S. Supreme Court justice

Annapolis is closely connected with the immensely popular 1976 book Roots: The Saga of an American Family, written by Alex Haley.  It tells the story of Kunta Kinte, an 18th-centuryAfrican captured as an adolescent, transported on a British slave ship to Annapolis in the British colony of Maryland,  and sold into slavery. The story follows his life and the lives of his descendants down to Haley.

The Kunta Kinte-Alex Haley memorial on the Annapolis waterfront, portrays Alex Haley seated, reading from a book to three children.

A BIT ABOUT MARYLAND.

The state of Maryland was named after Henrietta Maria of France, the queen consort of England, Scotland, and Ireland as the wife of King Charles I. Maryland is the only state in the United States whose judges wear red robes.

The Maryland State flag is the only state flag to be based on English heraldry. The black and gold design on the quartered flag is based on the coat of arms of the Calvert family.

When you’re traveling, you are what you are right there and then. People don’t have your past to hold against you. No yesterdays on the road.” William Least Heat Moon.