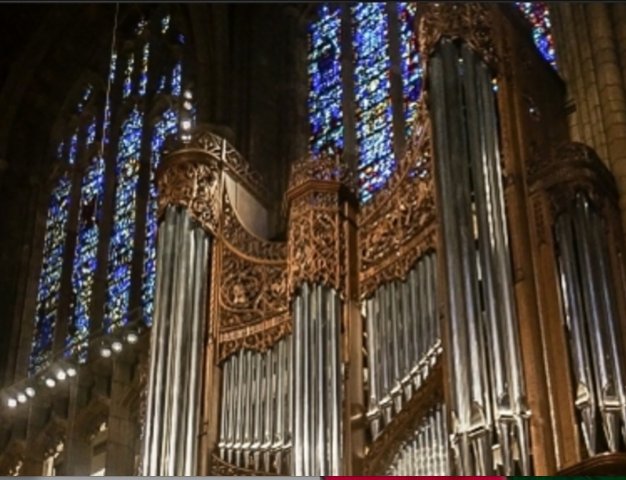 The new organ at St. Thomas Church in New York 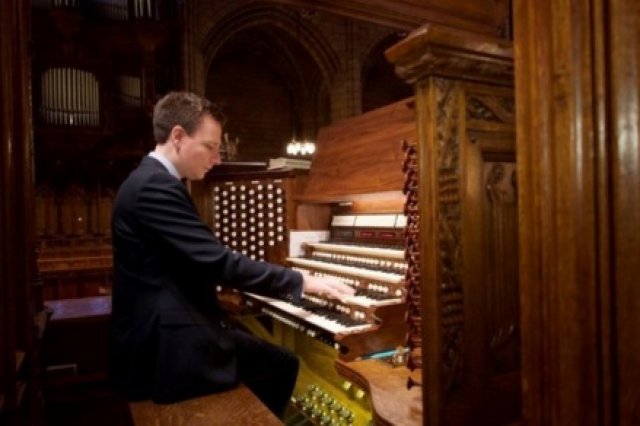 St. Thomas Church in New York is introducing its magnificent new organ with a series of concerts. A recent program of ferociously reverent music displayed the grand instrument in all its glory. The Choir of Men and Boys was joined by the Orchestra of St. Luke’s. Sara Cutler was featured on the harp, soprano soloist Hyesang Park, and Benjamin Sheen on the brand new organ also shone.

C.H.H. Parry wrote Blest Pair of Sirens for the Golden Anniversary of Queen Victoria’s reign It was paired at its premiere with an enormous Berlioz composition and stood up well. Recently it was performed for the wedding of Prince William and Kate Middleton. The composition celebrates the “Sphere-born harmonious sisters. voice and verse.” To this we might add organ and orchestral ensemble.

Less familiar, but equally moving, was Otcenas, the Lord’s Prayer as set late in life by the Czech composer Leos Janacek. Composed in six brief movements and featuring a tenor voice which was replaced by the superb soprano Hyesang Park and also the harp and choir. All the elements weave back and forth against a background of intriguing harmonies. In the second part, the choir leads. Janacek had been inspitred by the religious paintings of Josef Mecina Krzesz which showed Russian peasants worshiping. After a brief opening phrase, Park enters with “Thy Kingdom Come.” The organ and choir vigorously ask not be led into temptation. Thoughtful singing around "Thy Will be Done,” is burst into suddenly by the choir pleading for “daily bread.”

Poulenc came to composing for the organ late. Mystery surrounds the exact date of the composition of the Organ Concerto, which became an instant hit. It appears to have been composed before the tragic death by decapitation of one of Poulenc’s dear colleagues, an organist, although the composer claimed that it honored him. Hearing the news, Poulenc insisted on driving to the celebrated shrine of Our Lady at nearby Rocamadour, even though he had never been there before and was not to any obvious extent devotional in nature. He was to describe the setting vividly. ‘Perilously situated alongside a winding road’ – how the impeccable Bernac must have loved that – ‘clinging in full sunlight to a vertiginous craggy rock, Rocamadour is a place of unbelievable peace. With a courtyard in front, pink with oleanders in tubs and laurel trees, the very humble chapel, half hollowed out of the rocky mountainside, shelters a miraculous figure of the Virgin, carved, according to tradition, out of black wood by Saint Amadour, the little Zacchaeus of the gospel who had to climb up a tree to see the Christ.’

If anything, it was a peaceful and serene epiphany, as suggested by Yvonne Gouverné. ‘We all three entered the silent chapel in which stood the statue of the Black Virgin.' Outwardly, nothing happened, yet from that moment everything in the spiritual life of Poulenc changed. He bought a little picture with the text of the Litanies to the Black Virgin, and began to write a very pure work for female choir and organ, Les Litanies à la Vierge Noir. This was Poulenc’s first specifically religious work and his first to use the organ. Its subsequent orchestration was for strings and timpani, the combination he used for the Organ Concerto. But in actual fact the Concerto was already on the piano desk well before the visit to Rocamadour.

There is no mystery to the popularity of the work. The composer’s wit and humor is intermixed with powerful reverence. The role of reverence in music can not be over-estimated. Poulenc had asked Marcel Dupres, organist at St. Sulpice, how to achieve the tedious drone that church organs have. Subtle passing off of scales which bring a smile may be one technique he used. Poulenc expected this concerto to bring emotional catharsis and it does.

Bernstein's Chichester Psalms followed an intermission. The composer, perhaps inspired by the Psalms he set,  outdid himself in this work. A member of the choir sang the counter tenor solo beautifully.

The program concluded with Samuel Barber’s Toccata Festiva. Benjamin Sheen at the organ was celebratory as well as moving throughout the evening. A packed church indicates the popularity of church music and reverence today.