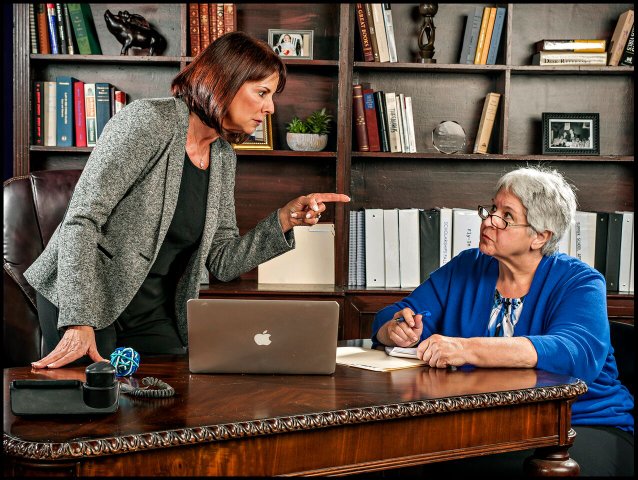 Photo by George Schiavone Sherri (Erika Scotti) makes it crystal clear to Roberta (Elizabeth Dimon) what her assignment is in Admissions. 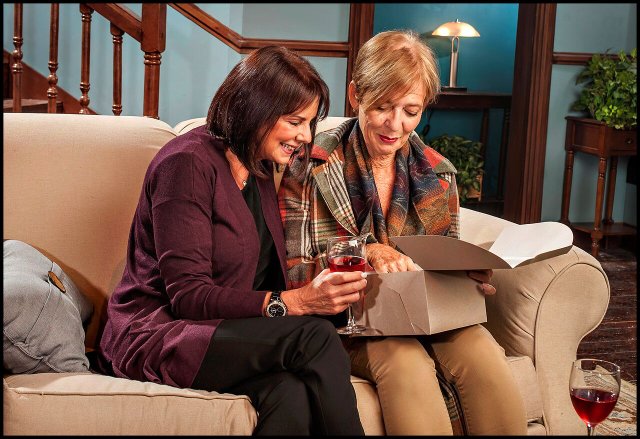 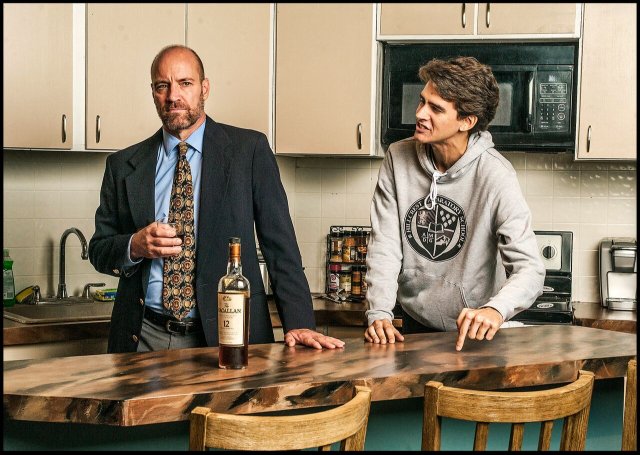 If you wanted to write a truly satiric, but apropos commercial for Joshua Harmon’s unapologetically satiric, scorching play, Admissions, the advertisement might read something like the following:

This is affirmative action and white, privileged, albeit liberal guilt on illegal drugs, alcohol as well as prescription drugs…all swallowed together.

Then, the commercial would cut to scenes that might make people of both political persuasions squirm. Or, it might make them laugh, but not  disturbed. Then again, it might result in all these reactions.

In fact, Admissions is such a complex exploration of race, personal values, ambition, fairness, and family dynamics, it might leave many people with a myriad of emotions.

You can explore the play at the first regional production in the country at GableStage, near Miami. Its high-octane and engrossing mounting runs through Nov. 11 in the intimate playing space next to the Biltmore Hotel.

Admissions won the Drama Desk and Outer Critics Circle awards for Best Play in New York. Indeed, this 90-minute gem contains material that should lead to many post-theater discussions.

Furthermore, its sometimes short, pithy scenes and snappy dialogue have the effect of caffeine, or one of those energy drinks. No doubt, you will remain wide awake, attentive and engrossed.

But how could anyone not be fully awake or aware of the strong emotions many harbor due to seemingly homogeneous people holding esteemed positions of power.

Surely, many of us want to change that. But, can one go too far in an attempt to create a so-called “Melting Pot?” Moreover, could such a person unknowingly give the slightest impression that they’re racist – even if such a mind-set is the furthest thing from their makeup?

To his credit, Harmon never takes sides or uses the phrase “Affirmative Action” in Admissions. No doubt, his goal isn’t merely to explore a topic. Instead Harmon, who, like GableStage, has never shied away from controversial, heated material, has written a character-driven play. Further, he’s filled it with high stakes. In fact, the combustible drama and tension hovers over the stage as thick as fog over the Golden Gate Bridge during an early morning.

Surely, it’s good that Admissions is a play and not a contact sport. Because the collision of the forces would result in many concussions.

A family’s personal values and beliefs butt heads against personal ambition and family devotion in Admissions. The play, for an unclear reason, is set specifically during the latter half of the 2015-2016 academic year at an almost elite, rural New England prep/boarding school.

The head of admissions is an ultra-liberal named Sherri. To say she’s committed to diversifying the student body and faculty is a vast understatement.

For instance, consider development department employee Roberta. She’s a woman in her 70s who tries to “see people for who they are, I don’t stop to examine the exact color of their skin the way you do,” she says, referring to Sherri.  The younger woman has tasked Roberta with compiling a school catalog clearly showcasing the school’s diversity. However, that can be hard when the student body is 18 percent students of color. Roberta continues: “Last time you said more people of color, and that’s what I tried to do, but apparently, they were the wrong shade. So, what do you want, Sherri? More dark-skinned ones?

One of the teachers, Don, is not 100 percent black. But, Sherri doesn’t have much choice.

Now, consider this bit of bitingly satiric dialogue between Sherry and her friend Ginnie, who’s as ultra-liberal as Sherri. They’re talking about Roberta.

Ginnie: Shouldn’t she have retired by now?

Sherri: She’ll never retire. She’ll outlast us all. Roberta Russert and the cockroaches.

Ginnie: She is so white.

Ginnie: This whole place is so white, still! Drives me insane. Ugh. If I were a terrorist, I’d blow this whole

Harmon writes with a mastery of satire without sacrificing sensitivity for others. That’s clear after we learn that Sherri “railed against the ethno-centric meal plan.”

Sherri: I never said anyone was racist for serving pizza.

Roberta: You certainly implied it, and Janine was very upset. She was in tears. She works so hard, trying

for the vegetarians, lactose pizza for those kinds. She tries so hard, and then you call her a racist—

While Harmon nicely, um, diversifies between subtle scenes and explosive ones, some of the most tension-filled moments involve Charlie. Specifically, they feature this gifted, highly-opinionated high schooler, his mother and Bill. He is Sherri’s husband, Charlie’s father, a “very liberal WASP” and head of  Hillcrest.

These scenes illustrate family dynamics, including differences in thought-processes between generations. But these scenes are at the heart of the head-on collision between Sherri’s mission to diversify and her allegiance to her son.

In particular, Charlie, the privileged, white, liberal son of upper-class parents, is deferred after applying to Yale. But the prestigious Ivy League school admits his black best friend, Perry. The results include hurt feelings, a destroyed friendship and explosive arguments featuring accusations of hypocrisy. And when we hear Sherri advocating for Yale to admit her white son when she’d turn away a white applicant to Hillcrest, BAM!

That aforementioned collision between her personal beliefs and family devotion occurs.

“If I wasn’t your kid, I’d be just another white guy, and you don’t really have like a lot of fond feelings about white guys,” Charlie tells his mom.

Obviously, when you hear him talk, you realize Charlie’s well-spoken. Still, even though he seems confident about his stance on issues, he’s a teenager trying to process complex issues that are hardly black and white. He’s also trying to come to grips with his values, which might seem to contradict each other. Even seemingly clear-cut terms such as “Person of Color” are more complex and nuanced than Charlie can fully comprehend.

One choice that Charlie makes might sound extreme to even the staunchest liberal. Needless to say, it shocks his parents. Also, it leads to an argument between father and son that sounds like a scene from an Arthur Miller play.

Harmon’s dialogue shifts between short and pity, during which characters alomst talk over each, Mamet style, and long-winded monologues that seem to never end.

Charlie delivers those long speeches. And Joshua Hernandez, as Charlie, has the stamina to complete each monologue. Equally important, he’s internalized the emotions behind those eloquent, intellectual words.

While Hernandez could convey more nuance, he captures Charlie’s adamancy, stubbornness, vulnerability, confusion, anger and brooding quality. Hernandez endows Charlie with an intellectual air, yet also finds the awkward teenager in him. Also, Hernandez’ expressive eyebrows helps him convey his character’s many emotions. Overall, it’s a tour-de-force performance by a young, promising actor.

Meanwhile, Erika Scotti offers a multi-faceted performance as Sherri. Sporting glasses, Scotti endows Sherri with an urgency and no-nonsense demeanor when she’s criticizing Roberta. By contrast, Scotti evokes a motherly love and tenderness toward her son, except when she’s mad and upset with him. Notice, especially, when she clenches her teeth, trying to control her anger.

Opposite Scotti, Tom Wahl drips sarcasm as Bill. In addition, he’s convincingly laid back and celebratory during upbeat moments.

So, too, is Barbara Sloan as Ginnie. The role requires the actor to embody a talkative, charming, yet opinionated personality. But also, she must convincingly display feelings of hurt and emotional upset. To her credit, Sloan nails all those traits.

Sherri, Bill and Charlie’s upscale, comfortable home stands adjacent to the office, with lighting designer Steve Welsh appropriately providing focus. However, the decision to place the settings side by side can be problematic. While the theater is intimate, it is wide. An audience member seated on the far edge of one side might have problems seeing or hearing the actors when they’re way on the other end. Perhaps a rotating set might work better in this and other plays that call for two settings at GableStage.

But the nitpicking stops here. Turn back, for a moment, to that commercial for the play mentioned at the beginning of the review. It might start and end as follows: This is affirmative action and white, privileged, albeit liberal guilt on illegal drugs, alcohol as well as prescription drugs…all swallowed together.

Oh, there should be plenty of questions and reflections from audiences after they see this complex, relevant play.

The first regional production of Admissions runs through Nov. 11 at GableStage at the Biltmore, 1200 Anastasia Ave. in Coral Gables. Performances are at 8 p.m. Thursday-Saturday as well as 2 p.m. and 7 p.m. Sunday. Group and student pricing are available. Visit www.gablestage.org or call (305) 445-1119 to buy tickets or for more information.