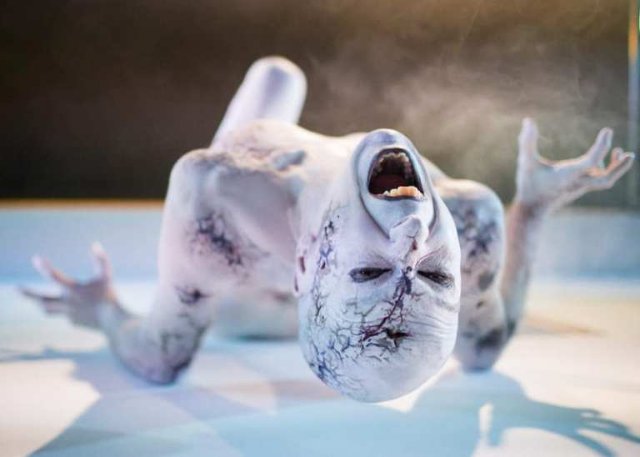 Frankenstein opens with an exquisitely staged birthing scene. The Creature is shrouded in a sheer fabric sac, a metaphoric womb. He struggles to free himself and emerges naked, covered in scars and suture marks. He strains to stand, to crawl, to walk, and has no language. The Creature is born as innocent as an infant. Does he become a monster, as the Frankenstein legend would have us believe? This 105-minute production addresses the question imaginatively.

The script for Remy Bumppo Theatre’s production of Frankenstein was adapted by English playwright Nick Dear from Mary Shelley’s 1818 novel. Ian Frank directs a warm and heart-wrenching production, staged on Joe Schermoly’s handsome minimalist set. Mike Durst’s lighting is dramatic and Christopher Kriz’s sound design and original music are an integral part of every scene, including the heartbeat percussion of the opening.

Poetic and elegiac are not the words I thought I would use to describe a production of Frankenstein. The language in Dear’s script is lyrical and the Remy Bumppo actors deliver his lines with soul.

Greg Matthew Anderson plays the Creature, who has no name. Nick Sandys plays Victor Frankenstein, the scientist who envisions and engineers him from various body parts. The two actors alternate in those roles from night to night. And this role-switching is appropriate, since in the final scene, the Creature says to Frankenstein,

“Don’t leave me. Don’t leave me alone. You and I, we are one. While you live, I live. When you are gone, I must go too. Master, what is death? What will it feel like? Can I die?”

Born in a land of nowhere, the Creature stumbles across the landscape, past drinkers in a tavern, past travelers on the road. On the outskirts of the town, people throw stones at him. He comes to the cottage of a blind scholar, De Lacey (the excellent Frank Nall), who can’t be frightened by the sight of the Creature. De Lacey befriends the Creature, teaches him to appreciate music, to speak, write and read. The Creature reads Plutarch and recites a long passage from ’s Paradise Lost.

De Lacey asks him why he is sad. The Creature responds, “Because with all that I read, all that I learn, I discover how much I do not know. Ideas batter me like hailstones. Questions but no answers. Who am I? Where am I from? Do I have a family?”

When De Lacey’s son and his wife appear, they are terrified by the sight of the Creature and attack him. The Creature escapes but then commits his first act of violence in retaliation. When he finally finds Dr. Frankenstein, he demands that the doctor create a mate for him to ease his loneliness. He promises that he and his mate will leave forever and never bother the doctor again. The Creature’s story takes another path, however.

The role of the Creature dominates the production of Frankenstein and Greg Matthew Anderson is superb in developing an unformed character, who becomes a tortured and lonely searcher. Is he a monster or is he turned into a monster by the hatred and aggression of those who meet him and cannot abide his ugliness? The rest of the cast—especially Nick Sandys as the doctor, Eliza Stoughton as (the doctor’s fiancée) and Frank Nall as the blind scholar—all give moving performances. Having seen the production with as the Creature, I would like to see it again with playing that role.

The Remy Bumppo production mirrors the 2011 National Theatre Live production, directed by Danny Boyle and based on the Nick Dear script. Two actors rotated the lead roles in that staging too.

This year is the 200th anniversary of the publication of Mary Shelley’s 1818 novel. That’s why we’re seeing four separate theater productions of the story this season. Frankenstein is usually considered the iconic horror story, with a touch of science fiction. And it is a monstrous story in many ways, from the Creature’s first emergence to brutal attacks on him and his attacks on others. But is it really a horror story?

My colleague and film critic Steve Prokopy would say no, because it’s not scary. In his introduction to his review of Halloween, Steve wrote: “I think we can all agree that at its core, a horror movie should be scary on some level. It can be many other things as well, but it … must be scary.”  A play—or a character—that can be classified as thoughtful and poetic isn’t scary. Watching the Creature change in his three years of life may cause you to fear him or sympathize with him, but it probably won’t give you nightmares.

Frankenstein by Remy Bumppo Theatre continues at Theater Wit, 1229 , through November 17. Performances are Wednesday-Sunday. Buy tickets for $37.75 to $62.75. Student tickets are available for $15.