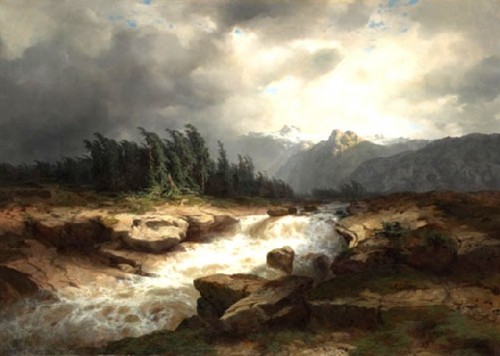 Mountain Torrent Before a Storm (The Aare River, Haslital), 1850, by Alexander Calame. Images courtesy of the Clark Art Institute. 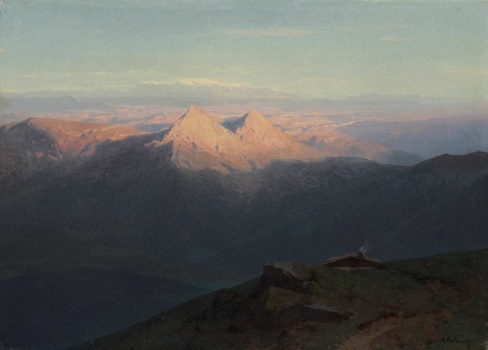 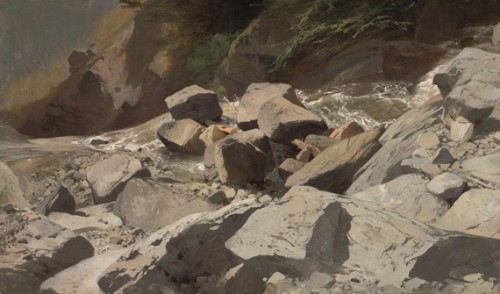 The River Lutschine Near Lauterbrunnen, 1862.

The Swiss Alps jut out above Europe so starkly that they exemplify a sense of awe called the 'Swiss Horror.' Today these inspiring mountains are more commonly known through beer commercials and extreme skiing ads than fine art; a commercialization that does some injustice to the Alps' ability to put one's life in perspective. Thus I found it refreshing and  nostalgic to return to these mountains in the  in-depth exhibit at the Clark "Alpine Views: Alexander Calame and the Swiss Landscape" which will be on view through the end of December.

The last time I was in the Alps was  1987 or 88, during a study-abroad adventure centered in Austria. We students frequently hiked to these and similar peaks, to view the grand panorama, learning how tiny humanity is in comparison. From the quiet heights, busy city life became tiny specks far below, unimportant. The Alps can make problems  melt away while sharpening  wits with thin mountain air.

Many of Calame's (1810 Ã‚Â– 1864) paintings parallel the earliest phases of American landscape painting formed by the Hudson River School. American landscape artists like Thomas Cole (1801-1858) and Albert Bierstadt (1830-1902)  traveled  to meet the circle of  European artists and teachers that included Calame. There are signiificant contrasts with the Hudson River School's inspirations, which included the Berkshires. In New England the air is thicker with humidity, the mountains smoother and lower. The Swiss Horror is much more tempestuous, laden with sharp-edged boulders, stunted krummholz and flash-flooded streams. Calame's series of Torrent paintings focus precisely on the characteristic dangers of the Alps. One gets the sense that any impromptu yodeling would be drowned out by howling winds.

And what is the hot theme of landscape painting in the 18th and 19th centuries? Nature revealed the divine. Today. this god-and-country idealism can seem to be a ho-hum conservative dream. But in the 19th century it was all the rage, so much so, that when Darwin's theories proposed to replace divine actions with dual forces of natural selection and randomness, most people scoffed. When a variety of 19th century mapmakers considered their early ideas of plate tectonics and contintental driftÃ‚Â– founding a new geological science directly related to the formation of mountains such as the Alps Ã‚Â– this too was mocked well into the 20th century. The most popular view was Calame's, that nature showed divine intervention. But where in America such readings of landscape symbolism helped fuel interest and intrigue in a new nationalism and westward expansion; in Europe these ideals were emblematic of liberty and egalitarianism.

Yet Calame's paintings also show a variety of departures away from earlier Academy painting methods. You might choose to pay special attention to Calame's brushwork, radical scrapings, and textures; how they careen thickly rather than always smoothly. For a contrast with Academic smoothness, you might compare Calame's brushwork with paintings by Louis-Leopold Boilly, (1761-1845), or Jean-Leon Gerome (1824-1904), both in the Clark's permanent collection.

Calame also had fun with some academic conventions. For example, in Grimsel Road, Calame denies the traditional repoussoir Ã‚Â– a framing of the outside edges of the canvas with trees or stones to enhance the sense of depth. He chose instead to plunk down a keystone dark and in the middle of the frame. This is a reversal of Nicolas Poussin's (1594-1665) and Claude of Lorraine, or Claude's (1600-1682),  landscape formulas, a turning of it inside-out. It makes the glacial, erratic boulder the centerpiece rather than the sideline, emphasizing one of Calame's favored motifs of smaller rocks and boulders adding up into gargantuan mountains. Apparently, Calame's divine "Author of all beauty and truth" does not follow artist's little rules.

There is a fierce integrity to Calame's paintings, a breadth of color and depth of visual investigation that is all too missing in most contemporary landscape painting, which is more usually a simplistic plein aire study made on a nice sunny day. Calame's Torrent paintings show us impossibilities, memories of events we can know but that can never be painted from life; dark storms careening across mountains, shafts of light held motionless, animated floods, windswept and swooning evergreens. You'll see what I mean if you imagine being an artist, trying to place your easel on a rocky outcropping during one of the Torrent scenes. You'd be swept away in the flood or blown off the mountain in the wind. You'd get frostbite if you stood still too long painting The Mythen. These paintings aren't even just one scene Ã‚Â– they are many studies combined and composed to create a new vision. Calame's recombinations do much more than merely mimic the world, they create a subtle fantasy that gives justice to the more extreme qualities of the Alps.

It's quite interesting to view paintings by Calame's teacher Francois Diday, as well as of both artist's followers and students. The curatorial and design teams excellently crafted the exhibit so that audiences can find contrasts and connections among the artists. Viewing the subtle variations among their paintings is somewhat like seeing a group of artists all use the same aesthetic form and grammar, as if  together they were writing a haiku or a sonnet. Diday occasionally followed well-known formulae for tree painting (see his Forest of Fingen) whereas Calame often dispensed with such templates. Their students ranged even further from convention until the viewer can just begin to see some of the late 19th century taste for modern brushwork and Impressionist patches of paint. Thus art collector Asbjorn Lunde and art historian Alberto de Andres have put together an astonishing array of historically important and quite beautiful paintings.

The catalog for this exhibition is the first to contain color reproductions of many of the paintings. As a bonus if you buy it you get a free bar of Toblerone chocolate.  For a well-designed website see http://www.clarkart.edu/exhibitions/calame/index.cfm