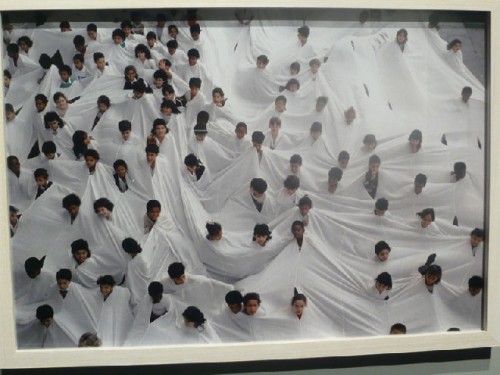 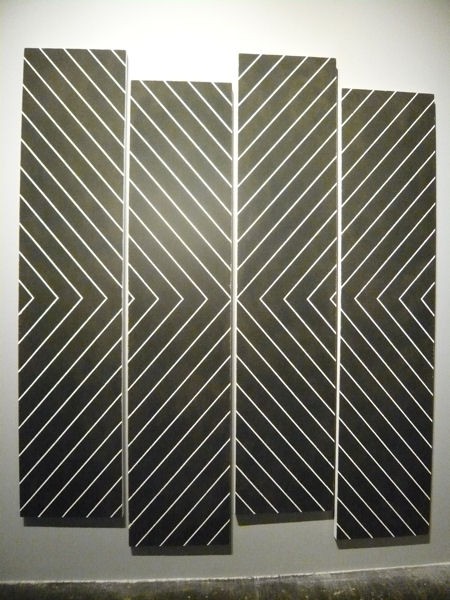 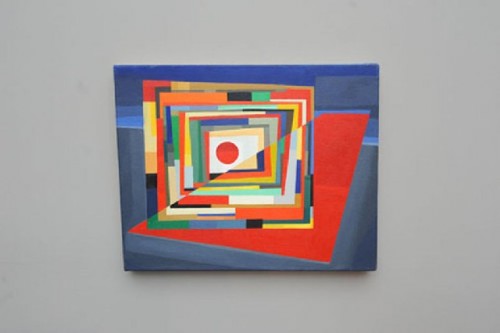 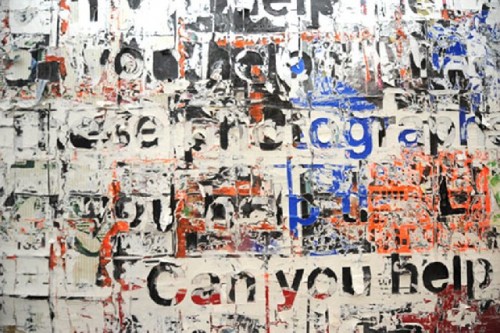 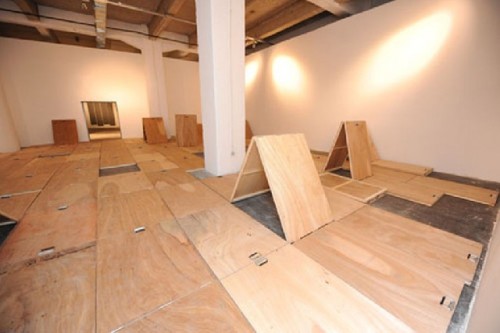 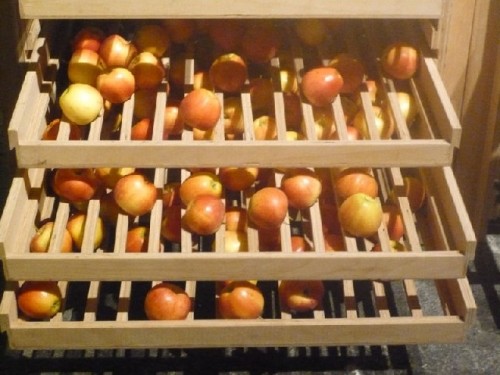 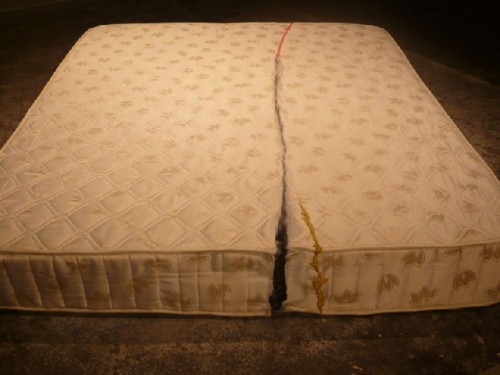 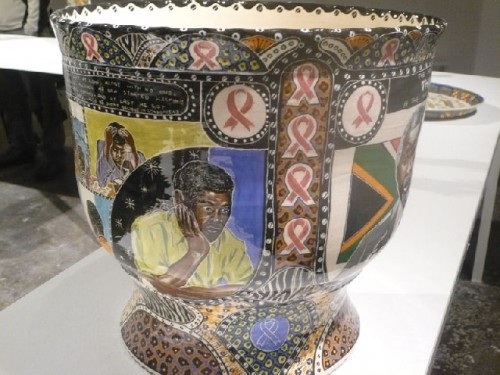 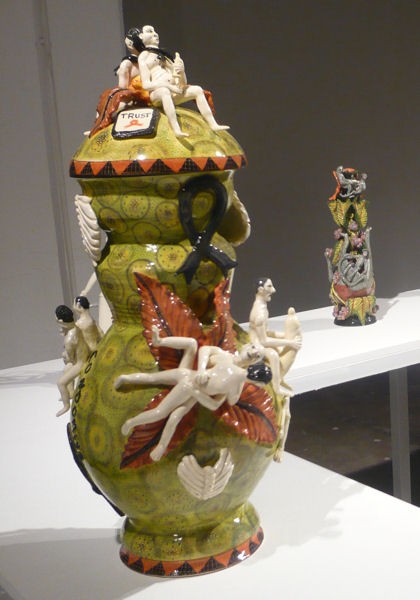 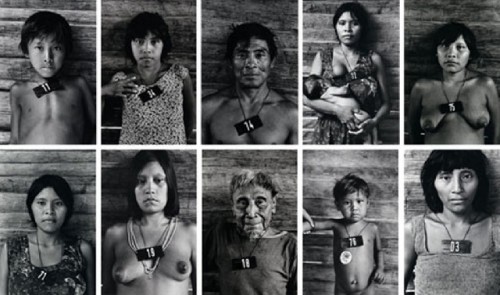 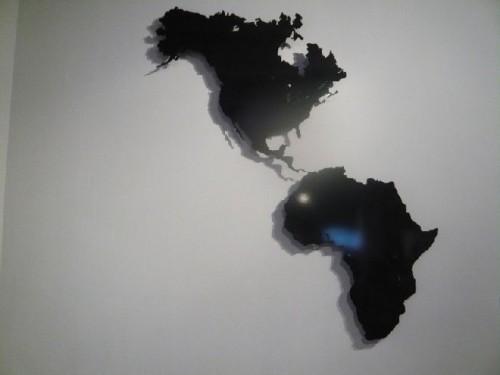 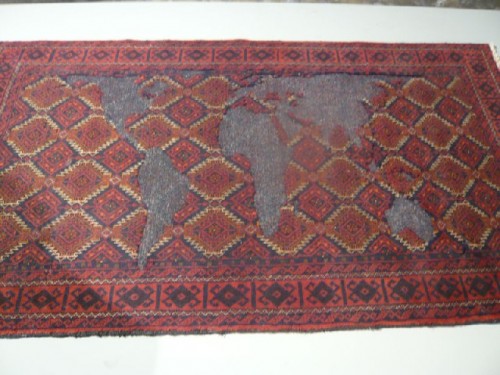 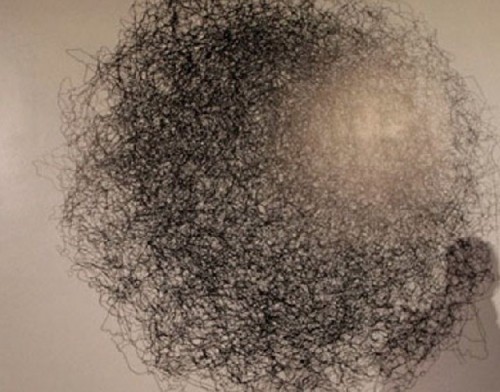 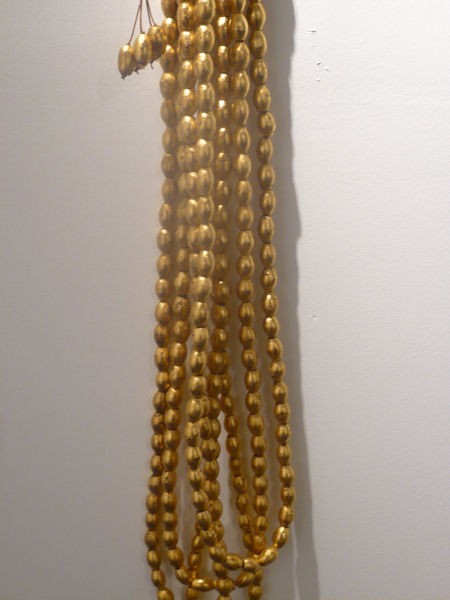 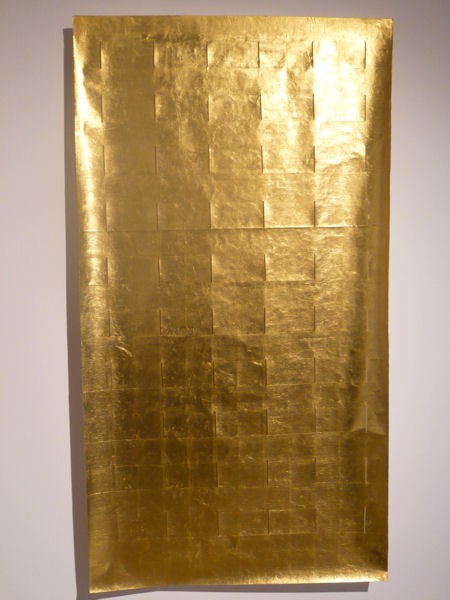 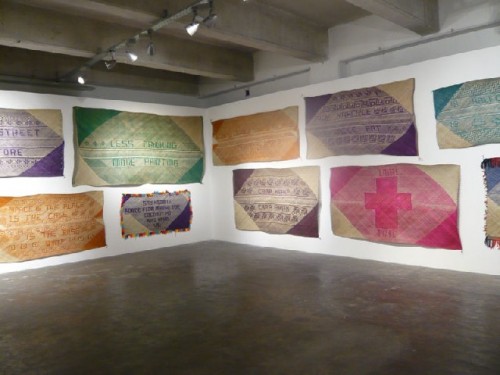 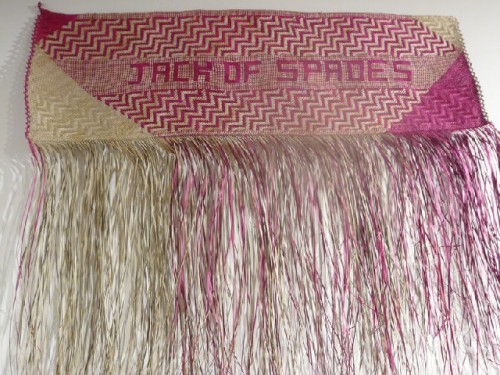 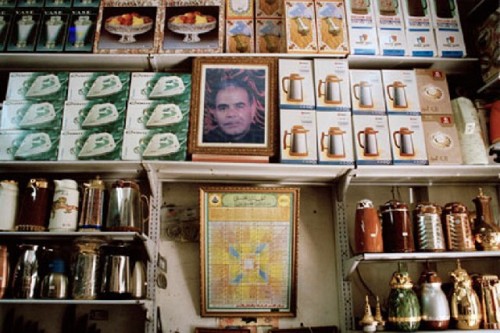 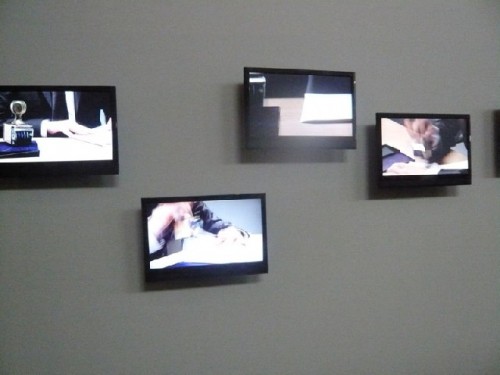 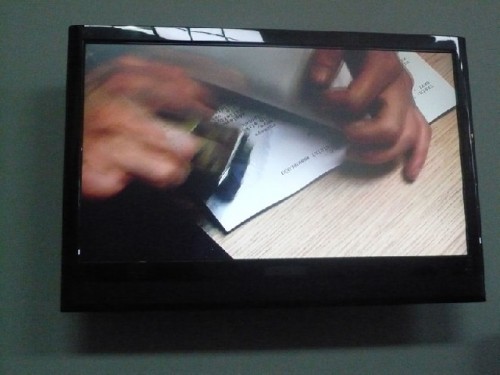 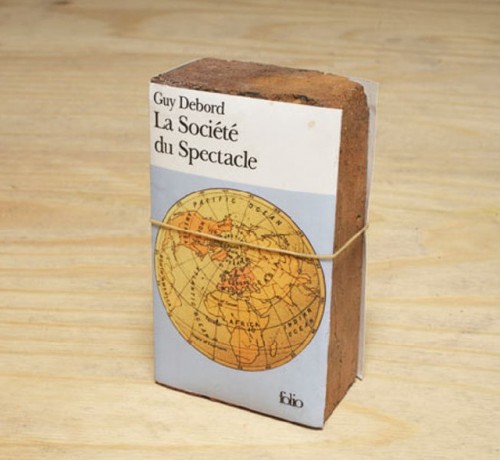 Claire-Fontaine, The Society of the Spectacle Brickbat 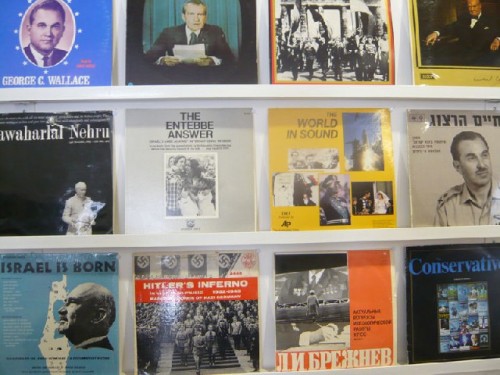 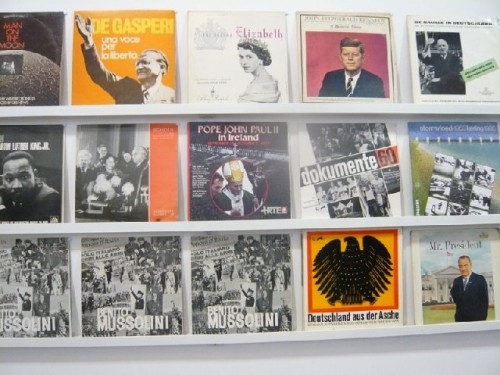 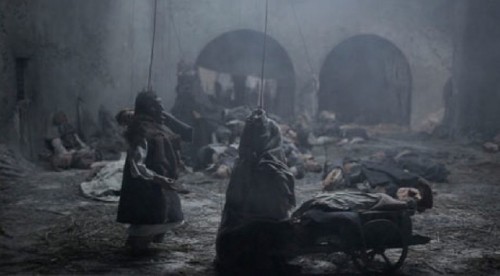 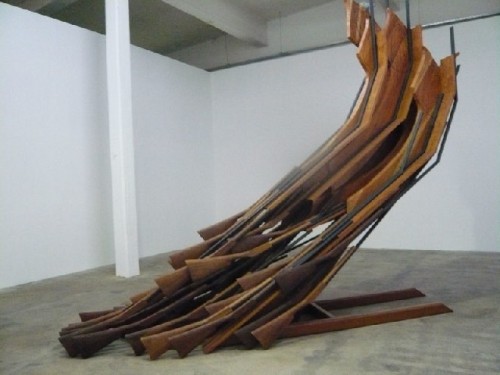 Eylem Aladogan, Listen to your soul, my blood is singing iron triggers that could be released 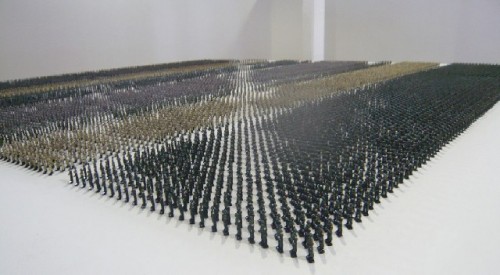 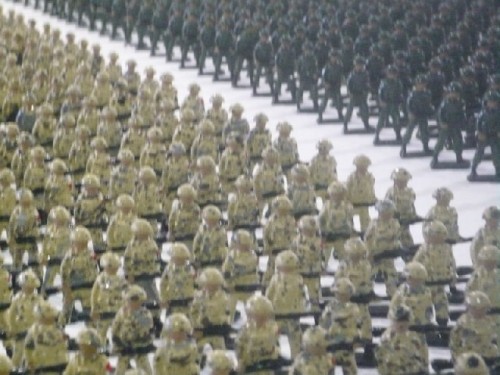 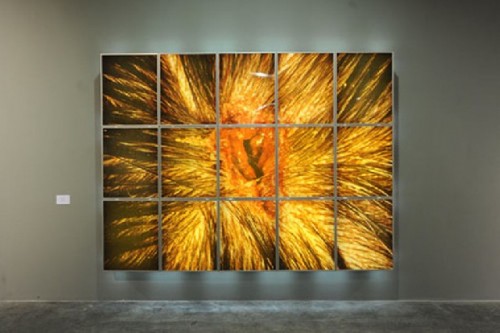 Since its inception in 1987, the Istanbul Biennial, organized by the Istanbul Foundation for Culture and the Arts (IKSV) and fueled by the generosity of a handful of patrons, has joined the ranks of the most prestigious art biennials, such as those of Venice and Sao Paulo. The city’s strategic position between East and West, combined with privately funded new museums and galleries dedicated to contemporary art, have helped the rapid rise of Istanbul as a cultural power, establishing its importance for transcultural dialogue.

Hailed as the best to date, the 2011 edition takes place in one location, allowing the visitor to focus on the art, rather than trying to discover installations spread throughout the European section of the sprawling city of Istanbul, which straddles two continents, as was the case in past years. The exhibition is concentrated in two warehouses (Antrepo 3 and 5) on the banks of the Bosporus in Tophane by Istanbul harbor.

Japanese architect Ryne Nishizawa, a master of exhibition design, has transformed the industrial buildings into galleries laid out in a pattern that mirrors the structure of the city itself. A large gray room acts as a hub for white rooms of various sizes, all within an enclosure of corrugated steel walls. Five thematically divided group exhibitions occupy the large gray rooms, which open onto a cluster of solo shows featuring 50 artists in smaller spaces.

Co-curators Jens Hoffmann, director of San Francisco’s Watts Institute for Contemporary Art, and Adriano Pedrosa, an independent curator based in Sao Paulo, have selected works that explore the relationship between art and politics. The title of the event, Untitled (12 Istanbul Biennial), 2011, echoes the titles of works by the late Cuban-American Felix Gonzales-Torres, most of which are “untitled” with a qualifier in brackets, as the artist believed that “meaning is always shifting in time and place.” Gonzales-Torres’s works were shown a year after his death at the 1996 Istanbul Biennial. His name and works, which were innovative and politically sophisticated, lend the general theoretical and aesthetic concept of the 2011 Biennial.

Five key works by Gonzales-Torres, whose minimalist installations carried a deeply emotional political charge, act as the conceptual seeds for the exhibitions: Untitled (Abstraction), Untitled (Ross), Untitled (Passport), Untitled (History), and Untitled (Death by Gun). Like their muse, these exhibitions, featuring 130 artists from 41 countries, are thoughtful, poignant, relevant, and intellectually engaging. Works with layered meanings explore the main themes that inspired Gonzales-Torres’s artistry — abstraction, love, national identity, contested histories, and death. Wall texts identify the themes. 20 of the installations have been commissioned specifically for the 2011 Biennial.

The ground floor of Antrepo 5 is dedicated to the exhibition Untitled (Abstraction), which looks at the possibilities for geometric abstraction to be infused with emotion. Brazilian Adriana Varejao’s Wall with Incisions a la Fontana, Istanbul 2011 reveals Italian painter Fontana’s cuts in canvas as open wounds. A documentary photograph of Lygia Pape’s Divisor 1968, taken in Rio de Janeiro, shows hundreds of individuals inserting their heads into slashes in a white piece of fabric, piercing it with their bodies. Mexican Juan Capistran, who lives in Los Angeles, fuses his acrylic composition of thin white lines squeezed by black surroundings with the logo of the American punk band Black Flag. The name of the work, White Minority, references to the racial content of the band’s song of the same title. Argentinean Magdalena Jitrik’s Painting in Askeaton 2009, is exhibited next to a video of its making to the soundtrack of guitars by her own group, Orquestra Roja (Red Orchestra).

American Mark Bradford’s solo show, Rat Catcher of Hamelin 2011 is a large-scale four–panel mixed media collage created for Istanbul. 50 billboards collected from all around South-Central Los Angeles form the basis of this socially charged abstract art. Sanded, stripped surfaces reveal what lies below. Brazilian Renata Lucas’s Falha (Failure) 2003 is a wall-to-wall large-room installation. A portable floor of hinged plywood sheets with handles allows visitors to reconfigure the space; the sheer size of the metaphorical portals presents a challenge of transposing one terrain into another, befitting the title of the work. Colombian Gabriel Sierra’s Postponed Still Life 2011 displays apples on elegantly constructed functional shelves, which are configured as viewers pull them out to help themselves to the apples.

The exhibitions Untitled (Ross) and Untitled (Passport) occupy the upper floor of Antrepo 5. The former is named after Gonzales-Torres’s stack of candy weighing as much as his long-time partner, Ross Laycock, who died of AIDS in 1991, like the artist himself five years later. In the context of the exhibition, Ross becomes an emblem of the themes of gay love and loss, desire, and intimacy. The moving walk-through includes a long corridor of shelves crowded with Michael Elmgren and Ingmar Dragset’s The Black and White Diary, Fig 5, 2009. The display consists of 364 black-and-white photographs in white faux leather frames, depicting the day-to-day lives of the artists and their friends.

Beds are a sub-motif in the exhibition, referencing the billboard made by Gonzales-Torres, which shows a black-and-white photograph of his empty bed the year his lover died. Tammy Rae Carland’s photographs, Lesbian Beds, are of unmade empty beds. Kutlug Ataman’s floor sculpture, forever 2011, is of the artist’s actual mattress from a past relationship transformed into a wounded piece with a red scar. In the same gallery, Ataman exhibits various framed official documents of his interviews relating to his sexual orientation and final rejection from service in the Turkish military — a poignant piece.

Another example of the transformation of an everyday object into a meditation on love and loss is Cuban artist Wilfredo Prieto’s Politically Correct 2009, a minimalist halved watermelon sitting on the floor. Ardmore Ceramic Art Studio, an artists’ collective from South Africa, tells stories about HIV/AIDS awareness by shaping fanciful forms out of clay. Each work is the product of the collective, reflecting Zulu values of sharing work as opposed to individual accomplishment. Ten table-top pieces range from plates to urns and free-form sculptures.

Works in the exhibition Untitled (Passport) revolve around national identity, trespassing, mapping, statehood, and political and cultural alienation. Swiss artist Claudia Andujar envisages a world where people are denied names and nationalities, becoming nothing more than anonymous ID numbers, as witnessed in her haunting Marcados (Market 1981-83), photographs of Yanomami Indians in Brazil. American Hank Willis Thomas addresses identity politics by referencing the US Constitution, which in 1787 deemed an African-American to be worth three–fifths of a person for tax purposes. In his work, I am Amen 2009, the artist creates a visual poem by rearranging words through a series of 20 small paintings in two rows. In his wall map, A Place to call Home (Africa-America 2009), Thomas depicts two big black continents joined by an isthmus, imagining a new continental configuration and thereby proposing a different possible history of the African diaspora.

Lebanese Mona Hatoum transforms sumptuous carpets by removing threads to show physical landmasses in the shape of the Peter’s Project world map, introduced in 1973. The carpets, entitled Afghan (black and red) 2009 and Baluchi (multicolored) 2008, portray a round world on a flat surface. Another altered view of the world is presented by Kirsten Pieroth, who has meticulously cut out every country from a large world map, displaying them in rows across the gallery wall in German alphabetical order. Turkish artists Özlem Günyol and Mustafa Kunt aim to erase national borders in Ceaseless Doodle 2009, a black scribble of a “globe” created by scanning the borders of each country, projecting them, and tracing them superimposed onto a wall, resulting in an intricately interwoven orb of the world.

Turkish artist Ahmet Ögut, who lives in Amsterdam, pairs two coins on black velvet in a glass case on a pedestal in Perfect Lovers 2008. The coins — 2 euros and one Turkish lira — are similar in form, but differ in value. They also come from different contexts — the European Union and Turkey — highlighting the contrasts between two similar realities, and drawing attention to the uneasy political relationship between the two “lovers.”

The works of an immigrant from India to New York, Zarina Hashmi, relate to her cultural identity. Tesphih III is an elegant wall-length cord of 500 prayer beads, carved out of maple wood with gold leaf. The piece recalls the practice of remembrance by repeating the names and attributes of God. Blinding Light, a large paper piece covered with 22-carat gold leaf, refers to the divine light in spiritual beliefs. Australian Newell Harry explores cross-cultural discourse through his Gift Mats, a traditional form of tribal currency in the South Pacific nation of Vanuatu, where such items are exchanged or given at ceremonial occasions. The commissioned hand-woven, dyed grass mats are loaded with pidgin and Creole phrases, imbued with meaning and word plays.

Taysir Batniji’s Fathers is a series of 34 photographic portraits taken in various shops in Gaza. These photographic compositions include the framed portraits of the founding fathers of the shops, hung among the goods, establishing a connection between past and present.

The exhibitions Untitled (History) and Untitled (Death by Gun) are located in Antrepo 3. History occupies an elongated room, calling attention to a narrative of time experienced in space. Cevdet Erek’s Ruler Coup 2009 displays rulers inscribed “1923,” “1960,” “1971,” “1980,” and “2009” — dates that stand out in Turkish history as the founding of the Republic, the three military interventions, and the date of the piece. Ali Kazma’s video OK 2010 captures a clerk’s hands fiercely stamping documents with great speed on seven wall-mounted monitors. Creating an effect of distorted time, the piece is a witty commentary on Turkish government offices.

Columbian Millena Bonilla’s Capital/Sinister Manuscript (Luxury Version) 2008 is a copy of an unauthorized Spanish translation of Karl Marx’s Das Kapital, written by the right-handed artist with her left hand and bound in cloth and gold — a luxury piece with impenetrable content. French artists’ collective Claire-Fontaine replaces the contents of Guy Debord’s book The Society of the Spectacle, by wrapping the cover around a brick.

Israeli Dani Gal’s Historical Record Archive 2005-ongoing presents the history of the last 100 years via LP covers depicting influential people. The evocative covers invite the viewer to imagine the recordings and to think about history, recalling what one knows and doesn’t know — a mind-expanding piece.

Untitled (Death by Gun) reflects on gun-related violence. Artists look at war, murder, and acts of aggression. The most compelling piece is Egyptian-born Wael Shawky’s Cabaret Crusades: The Horror Show File. A 30-minute video made with 200-year-old marionettes from the Lupi Collection in Turin tells the story of the first Crusade (1096-1099). Based on Arab historian Maalouf’s classic, The Crusades through Arab Eyes, the antique marionettes, dressed as Christians and Muslims, act out a horror show of subjugation with lighting, sets, and English subtitles.

Jordanian Ala Younis presents Tin Soldiers 2010-11 on top of a massive table. The piece consists of 12,235 custom-made tin soldiers, produced in numbers proportional to the numbers of active troops in 2010. Soldiers are fitted with the military outfits of Egypt, Lebanon, Iraq, Iran, Israel, Jordan, Palestine, Syria, and Turkey. A native of Holland born of Turkish parents, Eylem Aladogan’s Listen to your soul, my blood is singing iron triggers that could be released, 2009–11 is a soaring wing-shaped sculpture interlacing enlarged feather shapes with barrels and butts of rifles. The work aims to reflect the tension between fear of death and the strength to survive. English Mat Collishaw’s Bullet Hole 1988 is a 15-panel depiction of what appears to be a bloody bullet hole in the back of someone’s head. Cibachromes in vivid detail and sumptuous color, mounted on 15 light boxes, look like stained-glass windows.

Although it covers all continents, the thoughtful and methodically crafted Biennial includes a larger number of artists from South America and the Middle East, underlying the aspirations of these regions to be contemporary while not losing their identity. Regardless of their origin, the artists have found much common ground over themes of urban decay, disenfranchisement, and the arbitrariness of national borders. Overall the Biennial is both politically and aesthetically engaging.