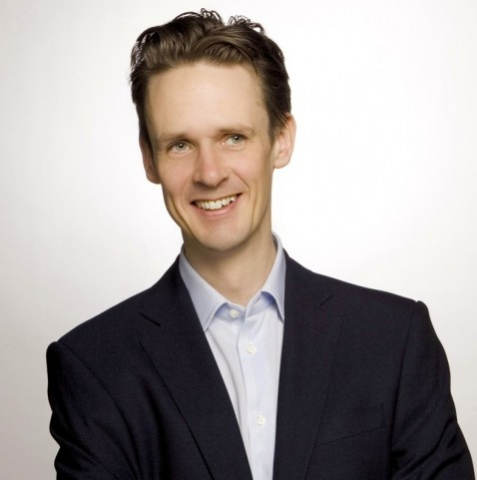 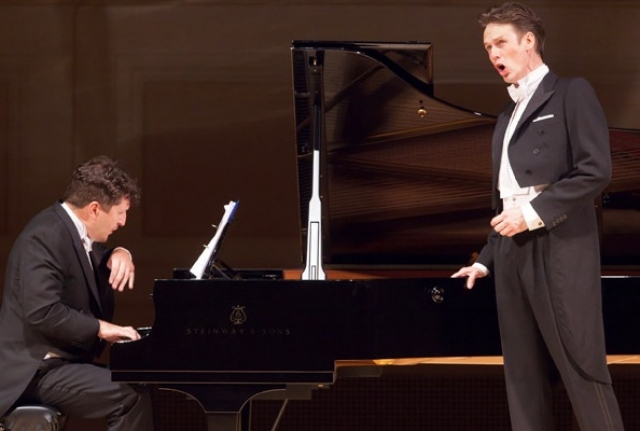 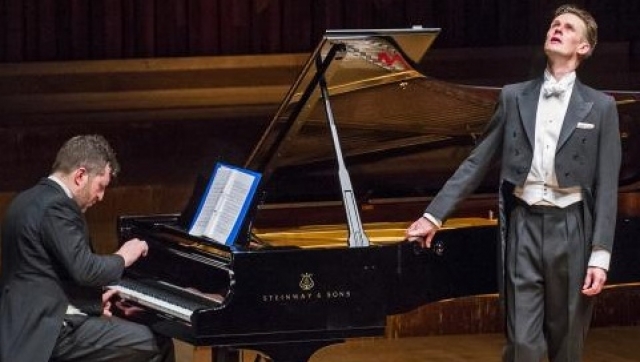 Adès comes to the Boston Symphony for a three year term as Artistic Partner starting in 2016-2017. 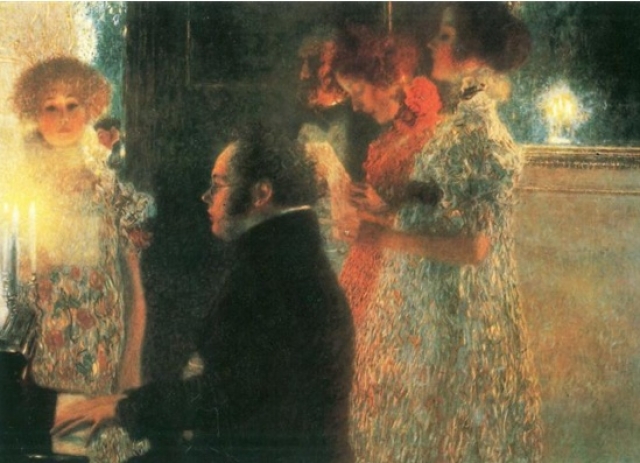 Gustav Klimpt painted Schubert at the piano. He premiered Winterreise playing and singing himself. This painting was destroyed in 1945 when retreating Nazis set Schloss Immendorf on fire.

Tenor Ian Bostridge is clearly a man of high intellect merged with passion.  The intelligence of his beautiful tenor, which ranges wide and explores dynamics including snarls and grimaces, is remarkable. Bostridge and pianist Thomas Adès clearly get pleasure from their collaboration.  It enhances this dark and beautiful journey.

Bostridge points out that 20th century giants like Samuel Beckett took to the Winterreise song cycle.  The monodrama is about a wanderer, who enters the world as a stranger (Camus) and leaves as one. Many identify this as a 20th century arc.

Who would begin a song cycle with Good Night, as Schubert has?  Lost souls who trudge on and on. Thomas Adès suggests this in stentorian octaves which introduce and accompany the written words and sung notes.

Some of the great singers of the past century have sung these words. When Bostridge first heard Dietrich Fischer Dieskau, he sang along with him, although Fischer Dieskau was of course a baritone, and Bostridge a tenor.

Internalizing meaning by exploring words, Bostridge can not only bring background to the words, but give his voice entirely to the composer's intent.

Audiences come to experience immersion.  The songs begin, yet the melodies do not linger on.  Instead we hear the physical analogy of the weather-vane turning.  The man is hollowed out, displaced alienated. The outlines of the angst expressed in the words is filled in by a wonderful human voice.  Yet the mystery of the loneliness and rejection remains.

Much of the text is in the quotidian. Mixed with mystery, the journey builds and has great power.

What Bostridge and Adès are able to do is externalize inner emotional turmoil and dramatize it.  Both men explore the outer dynamic reaches. Adès tends to be recessive, often playing the piano as quietly as  possible.  Whispering at times.  You continue to feel the pull of the trudge.  He captures the rustling of the linden leaves and

Bostridge has an elongated body, the perfect house for sound. He almost waves in the wind as he sings, also pressing forward on the journey.

Schubert's music is miraculously taken over by intent. The songs are liberated.  In Carnegie Hall, the music wafts over us in deeply personal waves.  The performers have released the composer in all his richness.  Oddities like major tones suggesting sorrow and minor ones joy, are completely natural.

Winterreise with it icy, frozen atmosphere may well be an icon for times past as global warming changes the world.

This program will be performed at Jordan Hall in Boston on October 28.