A Conference to Discuss the Object in Spatial Context 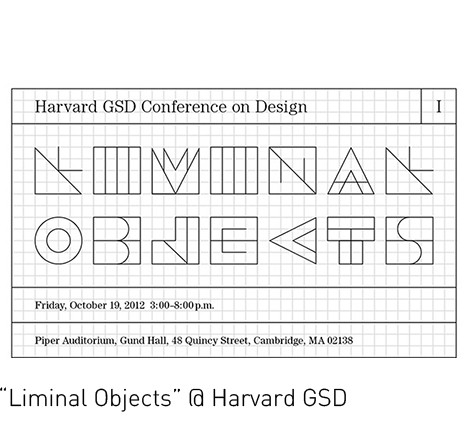 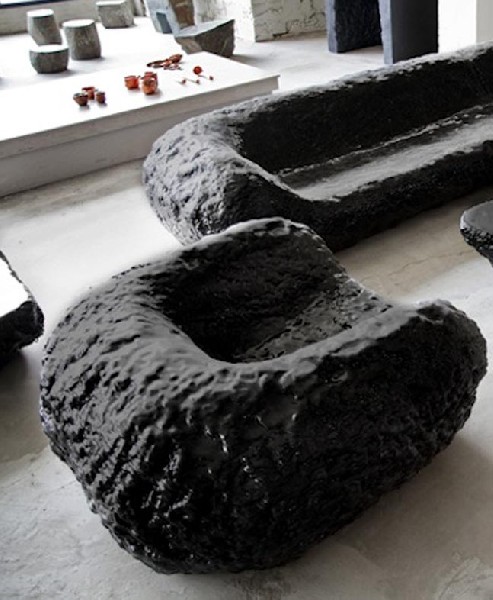 Furniture from the Johnson Trading Company, Queens, MY 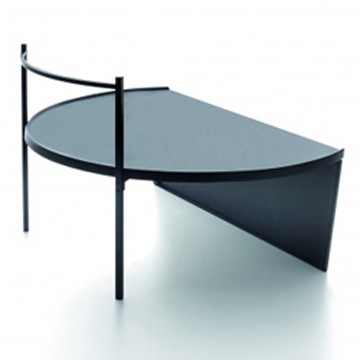 Table by Jonathan Olivares for Knoll 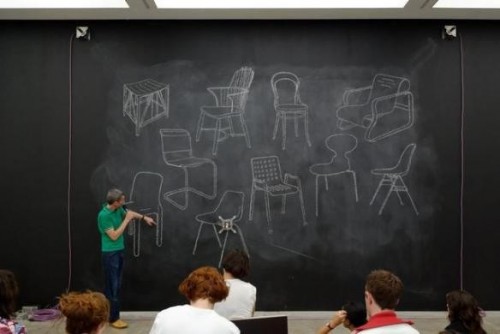 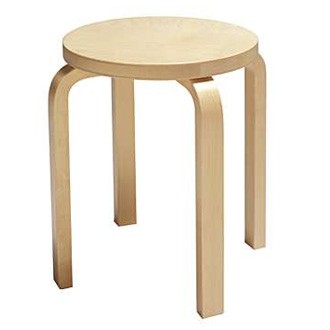 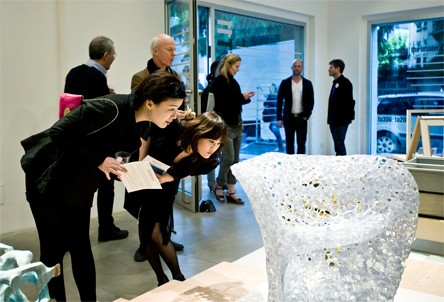 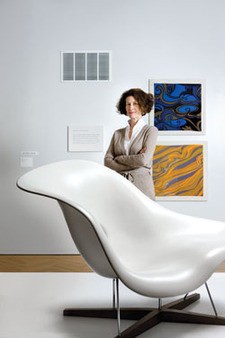 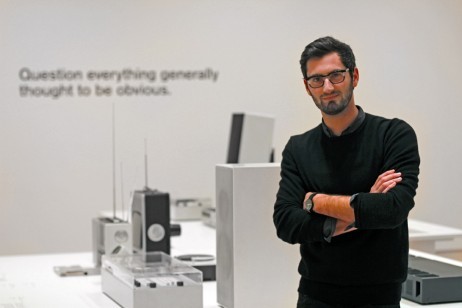 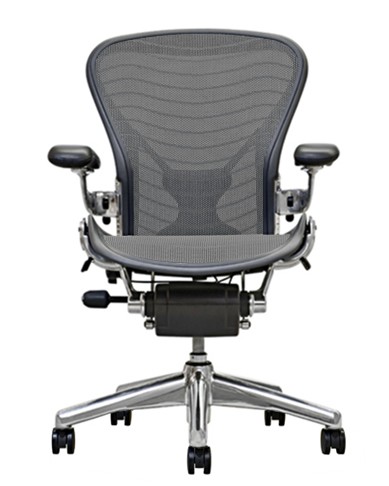 Fifteen years ago, October 15, 1997 in fact, before a standing room only crowd, megastar designer Philip Starck was invited to Harvard's Graduate School of Design (GSD) to receive the first Harvard University Excellence in Design Arts Award. At the time, I wrote that this was like the Westminister Dog Show giving a special award to a cat.

Historically, architects have considered themselves far above other design professions and professionals in status, competence and even aesthetic knowledge. Many of us know better. More of a European model than American, some architects felt they were capabable of designing anything and everything.

This practice included Greene and Greene, Frank Lloyd Wright, Le Corbusier, Gaudi, Horta, etc., but few got everything just right and the vast majority needed to collaborate with others. This is true today as well.

So, it is good to see that with the benevolent fostering of Dean Mohsen Mostafavi, Harvard's GSD is paying serious attention to various aspects of design other than their formal programs of architecture, landscape architecture, urban design and planning.

Objectively looking at the object sounds funny but is a legitimate academic and even creative exercise. And that is what the conference Liminal Objects was about for over five hours on October 19. It was the first of a series of conferences focused upon the object.

Beginning with the premise "design is a complex series of cultural practices that exists between the scale of architecture and the human body," the various presenters and speakers discussed the notion of how the design of objects shapes the built environment and contributes to quality of life and resource use.

This is inquiry focused on furniture and furnishings, objects (both utilitarian and luxury) that already exist and can be improved or refined, objects that have not been conceived of yet as well as the spaces between object and activity.

As public interest in design is stronger and broader than ever before, but its boundaries are challenged as emerging areas of specialization and technologies expand the discipline from within and refine in from outside, now great numbers of professions appropriate design methods for their own uses.

Liminal Objects initiated a multipart conference series about design that aims to identify pressing issues within the field by exploring the designed object’s role in diverse but often tangentially related spatial practices.

Through discussions between designers, critics, curators and industry leaders, the conference approached design from differing points of view. Its panels looked at issues involved in the production of design, design practice, and ways in which institutions and galleries shape design through exhibitions and commissions. With audience participation, the conference culminated in a round table discussion that involved GSD faculty and invited guests.

Overall the level and quality of the design conversation and the various presentations were enlightening and at times wonderfully provocative. However everything did not ride smoothly along this creative object parade.

Among the best presenters were Benjamin Prado , executive vice president and design director at Knoll, Jürg Lehni, interactive designer who works across media platforms and creates machines and environments for drawing and projections and Murray Moss, a visiting curator and consultant who looks at objects from a wonderfully quirky perspective. All had high octane presentations.

The conference was opened by a thoughtful historic introduction by Dean Mostafavi. This led to a first panel on Design in Practice moderated by a very knowledgeable Justin McGuirk, the Design Critic at The Guardian who had just returned from a trip to China. On the panel were designer/writer Jonathan Olivares, conceptual designer Jonathan Muecke and previously mentioned interactive communications designer Jürg Lehni.

They attempted to address several questions. How does a designer begin to form the questions that will frame his work? How is design effected as the tools of daily life are increasingly becoming virtual? What techniques are essential in the designers' process? What is the relationship of design to the body and the surrounding space?

Jonathan Olivares is currently creating an aluminum chair for Knoll, and he skillfully took the audience through the creative process with illustrative slides. Jürg Lehni's presentation, both video and slides, was a wonderful display of brilliant thinking and technical flair. He created magical machines that drew images, projected images with lasers and did animation. His work is quite special on many levels.

Unfortunately, Jonathan Muecke's presentation was on a much lower level. His slides were unreadable and incomprehensible. He narrated his design in the same way that conceptual artists described virtually nothing aesthetically appealing several decades ago. Drawing his project with an over abundance of words, the problem was that his design was minimal and not very interesting.

Muecke is clearly one of those individuals found in the art world and in the design world that curators and grant-givers find "serious." The only thing serious here was how he seemed to professionally embarrass himself compared to the other presenters at the conference.

This panel addressed the design museum functioning between the design sphere and the public, as a historical mechanism, a critical outpost, and as a catalyst for change both within the field and in the public's perception of design. Professor Mori started the discussion by showing slides of one of her GSD studios visiting Kyoto and master craftspeople underscoring the physicality of object creation.

Both Cara McCarty and Joseph Becker brought elegant and thoughtful institutional perspective to the discussion while Murray Moss added out of the box provocation to the design environment visual conversation. He was at once witty, scholarly and a bit wacky. His sense of design is amusingly embracing.

Moss created an exhibit last year for London's Victoria & Albert Museum called Industrial Revolution 2.0. Here he continued his provocatively profound visual and cultural dialogue between art and design.He commissioned objects to reflect parody and engage objects from the V&A's collection like a Roccoco Dress and a Beautiful Bust of a women with an added new hat.

A major concern of this panel was the problem of displaying architecture in a museum or gallery setting. The issues of scale and environment made this generally an unsatisfactory experience. New technologies may be a partial answer but the concept of the outdoor room may be a better one.

Focusing upon the mass manufacturers and limited additions, the third panel included moderator Jeff Chu (an editor at Fast Company) along with Benjamin Pardo (Knoll's Director of Design), Ville Kokkonen (Artek Director of Design) and Paul Johnson (Johnson Trading Gallery owner). They were very lively and direct in their conversation.

Discussing various forms of production, they spoke about how the design object evolves including planning, research and the production process. They explored how manufacturing is changing the way that objects are designed.

With his Finnish company background, Kokkonen had a very European craft perspective while Johnson talked about his limited edition furniture as art approach. He also discussed materiality and new fabrication methods exploration with individual designers.

And Pardo was the enthusiastic exponent of wonderful desireable design objects and furniture. He spoke with great joy and effervescence about what he was doing and trying to accomplish with megamanufacturer Knoll. As he spoke, he brought an electricity to the room.

The last group to speak was primarily academic. It included Mack Scogin (Professor and Mack Scogin Merrill Elam Architects), Francisca Insulza (Professor/Architect), Sanford Kwinter (Professor of the Theory of Architecture and Art) and Karen Stein (Design Consultant and Writer). With the exception of Scogin, who along with his partner/wife Merrill Elam were recently given the National Design Award for Architecture Design, all were talking heads.

Scogin showed a collage of his students' work exploring interiors and objects. A few of the worst of these made little sense, but the best was a wonderful and biting analysis of the so-called "perfect" Herman Miller Aeron workchair. Here perfection was torturously imperfect.

This round table panel explored how the GSD should get involved in the design of objects and interior spaces, linkage drawn between existing spatial practices and object design in GSD courses and what pertinent past work done at the GSD could be a point of departure.

All the participants added to the conversation except for Professor Kwinter who (he calls himself a theorist) thinks everything that he says is profound. At best, it is sometimes provocative. In this case, he sounded a little silly or at least out of touch.

Kwinter stated that he was apparently gobsmacked to find out that object designers shared almost all of the problems that artists have bringing art to market plus the greater restrictions of the commercial marketplace and mass manufacturing issues like economics, safety, etc. Well,... yes.

The conference ended by Dean Mostafavi thanking the audience of perhaps 150 for staying through the conference. He added that this was a great beginning to the discourse of object design at the GSD. There will be much more to come.