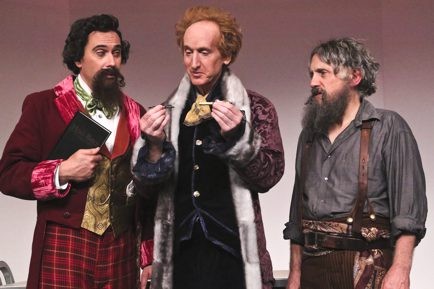 Sometime the only way to communicate controversial or ambiguous ideas is to employ the theatrical conventions of comedy and satire as the messenger of enlightenment.

In the Geffen Playhouse’s current production “The Gospel According to Thomas Jefferson, Charles Dickens, and Count Leo Tolstoy: Discord”, written by Scott Carter and directed by Matt August, three of history’s great thinker/writers come together in a blisteringly funny battle of wits to explain their divergently held opinions.

Playwright Carter said that the story had been incubating in his mind for over two decades. He just needed an Epiphany to bring clarity and the direction needed to turn his thoughts into a theatrical script. With the help of friend and director Matt August, the property has been turned into a clever amalgamation of theories, ideas and opinions, some of which, reveal the private thoughts and lives of Carter’s three characters: Thomas Jefferson, Charles Dickens, and Count Leo Tolstoy. Each character representing a different century in which each lived. The production is reminiscent of, and a takeoff on, the old Steve Allen TV show “Meeting of Minds” back in the late 70’s. It worked then and it works once again.

Los Angeles is primarily a movie and TV town, so it comes as no surprise that the cast portraying the three individuals of the play’s title have that sort of bent. So was the opening night audience. It was sprinkled with lots of actors and industry types.

Director August begins the evening revealing a completely dazzlingly white stage, with one door, which after a beat or two opens, and allows 18th century Thomas Jefferson, the man of logic and reason, portrayed in full Jeffersonian costume, by Larry Cedar to enter. Then the door locks shut. Cedar bewilderingly glances about to assess his situation and location (the logician). Then quickly realizes he is a prisoner of sorts but doesn’t understand why, and then becomes the narrator, tour guide, and the man of reason during this 85 minute adventure in words and ideas.

When the door opens a second time Charles Dickens (David Melville), the 18th century novelist and wordsmith walks in and quickly comes to the party as Jefferson explains we’re here to be judged by some tribunal of sorts. Dickens in full theatrical delivery flamboyantly demands to be allowed to leave. When nothing happens the 17th century sits down with the 18th century and both wait for the 20th century figure to arrive. When the door opens Count Leo Tolstoy (Armin Shimerman) enters complaining in full-throated, heavily accented Russian, his displeasure at his treatment. With all three participants present and introduced, the trio for the evening’s entertainment agree to defend their divergent opinions.

The discourse or “discord” as the title implies, is spirited and heated at times as each tries to convince other of the error of his position. What these three historical figures do have in common, however, is that each has written his own version of the Bible by which to believe and to live his life. It should come as no surprise to learn that all three historical figures in real life didn’t follow their own advice during their lifetimes.

Playwright Carter’s premise is rich in promise and entertainment value, however lurking just beneath the surface of the narrative text is a touch of the didactic approach as a way of engaging and imparting the information necessary to enjoy the splendid performances of Cedar, Melville, and Shimerman. Nevertheless, the audience can still come away with a stimulating evening of comedy and satire in the theatre, thanks to director August and his creative team led by scenic designer Takeshi Kata whose stark, spare hospital-like operating theatre room, sans the medical trappings, is visually arresting, and sets the tone for what is to follow. The lights by designer Luke Moyer, complement the costumes designed by Ann Closs-Farely, along with projections by designer Jeffrey Elias Teeter, and sound support by designer Cricket S. Myers, make for a seamless production.

Ambiguous endings from playwrights and screenwriters are all the rage these days. So it’s okay to dream up your own ending. Whether you do or don’t, you’ll still enjoy this production.

“The Gospel According to Thomas Jefferson, Charles Dickens, and Count Leo Tolstoy: Discord” at the Geffen Playhouse runs through November 23, 2014.