The Agitators by Mat Smart a World Premiere

The Story of Susan B. Anthony and Frederick Douglass in Rochester 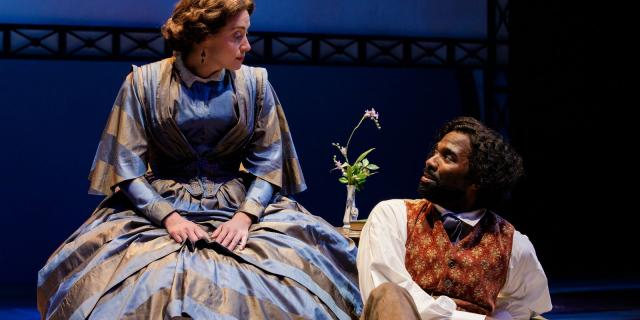 Madeleine Lambert and Cedric Mays in The Agitators,

In the 53 years since I began teaching in the Rochester, New York area I’ve seen a number of developing plays, books, TV studies, and whatnot about two local historic pioneers in American civil rights, Susan B. Anthony and Frederick Douglass; this is the best dramatic treatment thus far to deal with their achievements and close relationship.

The two were already gaining considerable notoriety as abolitionists when they met here in 1842. And though they shared that passion all their lives they grew to differ and sometimes oppose each other in their relative positions toward Douglass’s passion for African-American rights and Anthony’s for women’s rights. Their argument was never “either/or” but rather a matter of what my German professor once illustratively discussed as “em-PHA’-sis.”

Late in the play, Douglas confesses regret to Anthony because he had earlier agreed to support a Constitutional amendment that would permit black men to vote but not women. He admits that he was convinced that once all races of men could vote, it would be no more than two decades before women would get the vote. Forty years later that still had not happened.

So there is much to learn and be reminded about in this charming play, which does have its dramatically moving moments and amusing action and dialogue. Beautiful lit frames inform us of dates and locales and occurrences, A central bare stage seamlessly adds furniture and objects and costumes in Jack Magaw’s handsome stage designs and Jessica Ford’s presumably historically accurate (and sometimes surprising) clothing. Time, space, and especially mood change potently in Christine Binder’s complex lighting. We get to learn about, like, and presumably understand, these two extraordinary people. And certainly there are a downright uncomfortable lot of contemporary parallels evoked in the evils of our society that these reformers condemn.

Madeline Lambert’s Susan grows in humanity as she ages in appearance and movement. Hers is a memorably subtle and convincing performance. Cedric Mays not only ages convincingly in the play but constantly increases Douglass’s magnetism as his wisdom and disillusionment increase. And Logan Vaughn’s direction provides what variety she can in skilled, fluid blocking. But this clever, presumably historically accurate, and entirely likable presentation is still a good deal more informative and significant than it is compelling or dramatically engrossing. I would not take a young child to sit through its two hours and fifteen minutes.