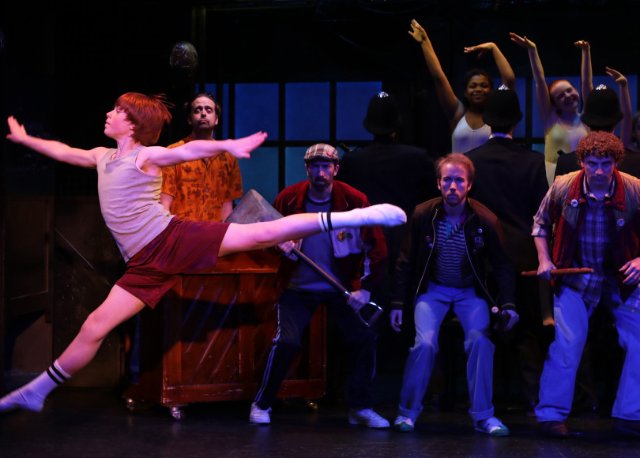 In August, Lara Spencer, an anchor on GMA laughed at the idea of Prince George taking ballet at school. He is just six years old. She then made a sarcastic comment about how happy he looked about it. In fact, not only did she laugh, but others on camera did as well.

Of course, she apologized. It became a media event as 300 male ballet dancers showed up in NYC for a “class” held in midtown.

So imagine, it is the 1980s and a boy lives in a working class town in northern England; his father, older brother and most of the men work in the coal mines. Times are hard; it is the Prime Minister Maggie Thatcher era and she has announced plans to close down 20 mines throwing 20,000 miners out of work and destroying some towns. But many feel that her real motive is to destroy the powerful coal miners’ union. (I was in London during the year long strike and remember tens of thousands marching in London shouting, “Maggie, Maggie, Out, Out, Out!”)

Billy Elliot, the musical which is now at Goodspeed through November 24 is set against the background of the strike.

Based on the highly acclaimed 2000 film of the same name, three main strands pervade the plot: Billy who accidently visits a ballet class and discovers a passion; the hard-working community fighting to survive and maintain the only way of life they know; and a widowed father with a son he has difficulty understanding.

The book and lyrics are by Lee Hall (who wrote the original screenplay) and music is by Elton John.

The success of the show hinges on the young performer playing Billy. On Broadway three rotated in the role; here there are two. I saw Liam Vincent Hutt, whose recent growth spurt has made him look a bit too old for the part. He has just become tall; this is particularly obvious when he is with his friend, played by Jon Martens, who is much smaller.

Beyond the height issue, which is not controllable, Hutt does well with the part. He has a pleasant voice, manages a version of a Northern English accent and dances well.

The other principals are overall excellent. Sean Hayden as Dad combines a man who is still grieving and struggling to do the best for his family while having make difficult decisions. The song, “Deep in the Ground” and “He Could Be a Star” illustrate his emotions.

Michelle Aravena plays Mrs. Wilkinson, the ballet teacher who doesn’t look or act as you might expect a ballet teacher. She may be a little more affluent than many of the townspeople, but she too knows the realities of their situation. She is a rough on the outside, soft on the inside woman who tries to convince Billy’s Dad that this is his passion and his way out of the mines. She does an excellent job with “Shine”.

The other principals are Gabriel Sidney Brown as Billy’s older brother Tony who works in the mines and is a strong supporter of the strike. Both he and Dad associate ballet with homosexuality although they use slang words for it. The spirit of Billy’s mother is sweetly played by Rachel Rhodes-Devy

One of the delightfully moments in the show is Billy and his friend Michael and the “Expressing Yourself” number; you see, Michael likes to dress up in his sister’s clothes.

Certainly the story requires some hard hitting songs about the work these men do and the risks and future that faces them. The second act begins with a Christmas party after the strike has been going on for months. There is a huge puppet of the Prime Minister and a sarcastic song “Merry Christmas, Maggie Thatcher.”

Some flaws exist in this production directed by Gabriel Barre and choreographed by Marc Kimelman. Barre has changed a few things from the original show and overall they work. Principally he has brought in the girls from the ballet class in some additional places. If budget and the small stage made it necessary to use some adult performers as some of the class, it showed and was disconcerting.

Members of the ensemble play multiple roles from the police sent to protect the scabs, to the miners, their families and others.

While Barre directed with a sure hand, Kimelman’s choreography seemed all over the place. It is almost as though he did not want to include too much true ballet and so inserted more contemporary dance moves. But when Billy is applying to the Royal School of Ballet, they seem very out of place.

As can be expected at Goodspeed, the costumes by Jen Caprio, Scenic design by Walt Spangler, lighting by Jason Kantrowitz and sound design by Jay Hilton are all excellent. I wish some other theaters could be a reliable with these production elements.

Billy Elliot is a political show; it is on the side of the miners and their families. In addition the show is about finding something you love to do and figuring out how to do it as well as how families grow and continue.

It is well worth seeing and very appropriate (despite some language) for older children and teesn.