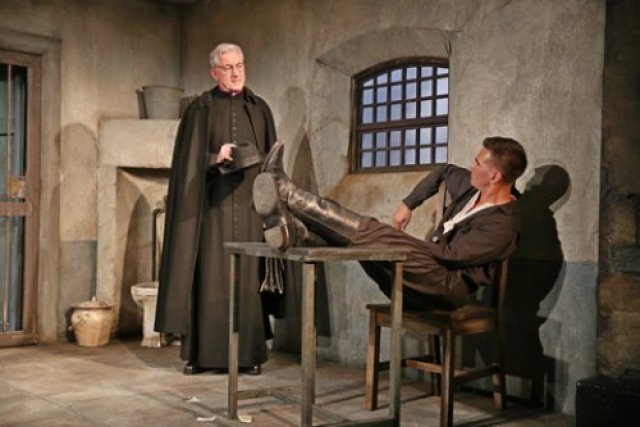 It could have been a philosophical debate or a political one in the wrong hands. But the brilliant acting at the Irish Rep’s production of Kingfishers Catch Fire turns it into an absorbing theatrical experience.

The play by Robin Glendinning is based on fact. Monsignor Hugh O’Flaherty, the first Irish priest to hold the title of Notary of the Holy Office, spent WWII at the Vatican, where he proved to be a man of action. His exploits for which he was nicknamed “The Scarlet Pimpernel,”  included smuggling partisans, Jews and others out of Italy to safety, estimated at over 6,500 people. Now the war is over and he is behind a desk processing annulments, which bores him to tears.

That may be why he visit Hebert Kappler in prison. Kappler was the Nazi chief of police in Rome. He became known as the “Beast of Rome” in part due to the Ardeatine Massacre in 1944 when 335 civilians were killed in retaliation for the killing of 35 German soldiers by the resistance.

It is fact that O’Flaherty visited Kappler in prison (he was serving a life sentence) almost monthly through 1959.

Their conversations can be described as verbal jousts. Kappler at first wants little to do with the priest, but even in O’Flaherty’s first visit, they find something in common – their beliefs and their frustrations. O’Flaherty’s with his new role and Kappler with his sentence. Neither his superiors not inferior were treated as harshly.

Though the first visit is supposedly to check on the conditions under whcih Kappler is being help, it soon becomes more. Kappler enjoys challenging O’Flaherty’s faith and his God. He has little remorse for what he did and readily admits. In fact during the course of the two acts (act two takes place several months later), he takes pride in how he rounded up the 335 who were to be killed; many were already condemned.

Act 2 is a few months late and the harsh prison conditions have taken a toll on Kappler.

What makes this production so remarkable are the performances of Sean Gormley as O’Flaherty and Haskell King as Kappler. In the very small, second stage at the Irish Rep, the audience is very near. This allowed you to see each small movement and  expression that either made. These are finely tuned performances and you sense that these actors know their characters very well.

Obviously, director Kent Paul has had a hand in making this show strike such a chord with the audience.  The set design by Edward  Morris  presents us with the cramped cell with just a bed, a small desk and chair and a dirty toilet in the corner. Bu act two, even some of these sparse furnishings have been removed.

This is a play and production worth seeing. It will give you much to think about long after the show is over.

It runs through Oct. 27. For tickets, visit Irish Rep.