The World on Stage 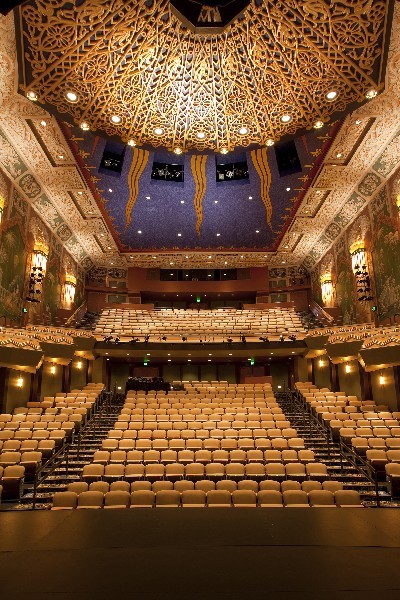 The interior of the renovated Paramount Theatre on Washington Street in Boston.

ArtsEmerson: The World on Stage continues its inaugural season of adventurous film program with a month that celebrates Godard, Orson Welles, Jerry Lewis, Stravinsky (in deference to Petrushka) and more, and includes Saturday afternoon family screenings and a very special discussion with screenwriter Jay Cocks.

All films are screened in the Bright Family Screening Room at Emerson College’s Paramount Center (559 Washington St., Boston). Tickets are $10 or $7.50 for members, unless otherwise noted, and are available in advance at ArtsEmerson.org or by calling 617-824-8000. Discounted tickets for seniors are $7.50, and $5 for all students with valid ID. These discounted tickets are available in person at the Paramount Center Box Office only. For more information visit www.ArtsEmerson.org.

Welles’ portrait of a midwestern town’s transformation amidst the onslaught of the industrial age “uses the full weight [of the director’s] Gothic style” to transform Booth Tarkington’s Pulitzer Prize winning novel into a “dark, almost nervous film” (James Naremore). As time inexerorably passes, the aristocratic Ambersons remain stuck in a decaying past while Eugene Morgan (Cotten) invents the automobile and finds fortune. Eugene’s frustrated love for Isabel Amberson (Costello) is mirrored in the next generation when his daughter Lucy (Baxter) meets Isabel’s bratty son George at the grand Amberson ball. The scene, recognized as the high point of the film for its complex blocking and fluid tracking shots, is quoted in Godard’s Une histoire seule; Godard cuts rapidly between the young couple and an image of the Lumière brothers, uniting the futures of the young protagonists and the cinema in doom and comeuppance. “One of the most sophisticated and morally complex visions of American history the movies have given us.” – James Naremore, The Magic World of Orson Welles

Une histoire seule, the second part of Godard’s magisterial video essay Histoire(s) du cinéma, opens with the strains of Bernard Hermann’s Psycho score and dedications to John Cassavetes and Glauber Rocha. Questioning his own place “in all this light, all this darkness,” Godard intones that when cinema was first projected, people saw that the world was there. That world seems comprised of two great stories, of sex and death. But there is also the story of cinema, which Godard traces here from its birth, as his ever expanding and dizzyingly diverse compendium of audio-visual references and montage ponder cinema’s power as entertainment, escapism, reproducer of reality, industry of masks, story-teller, receiver and giver, memor

In his second directorial effort, Lewis’ offbeat antics revolve around oblivious production assistant Morty Tashman (played by Lewis himself), hired to observe and report on the inner-workings of “Paramutual Pictures.” Misadventure gives way to misanthropy as Lewis reveals Tashman’s disheartenment through interactions with members of Hollywood’s filmmaking community. Critic Chris Fujiwara writes, “Morty's melancholic insight introduces a new metaphor in a film full of metaphors… depths of loss and sadness beneath the relationship between the cinephile and the object of his love.” While a criticism of the role of celebrity and the movie industry, the film is not totally cynical, as Lewis’ charm and eccentric performance emphasize the importance of laughter and active imagination. Balancing idiosyncratic physical humor with biting cultural commentary, The Errand Boy is a film for all ages; kids will revel in Lewis’ customary quirkiness, while adults will appreciate his subtly mature thematic ruminations.

Aoki chronicles the life of Richard Aoki (1938-2009), a third generation Japanese American who became one of the founding members of the Black Panther Party. Filmed over the last five years of Richard's life, the documentary features extensive footage with Aoki and exclusive interviews with his comrades, friends, and former students. Screens with Infamy, Kevin Senzaki’s short about a second-generation Japanese-American’s experience on the morning of September 12, 2001. “Anyone unfamiliar with Richard Aoki’s work and legacy would be well advised to check out Ben Wang's and Mike Cheng's documentary, in which everything from Aoki's childhood in internment camps and his role in helping found the Black Panthers to his unflinching (if evolving) lifelong commitment to radical politics is deeply researched and celebrated. “ -Ernest Hardy, L.A. Weekly

This shorts program, curated by the Boston Asian American Film Festival, features 7 films: The Humberville Poetry Slam (Emily Chang & Dan De Lorenzo), in which a wannabe poet organizes a small town poetry slam to build a team for the National Slam; Clap Clap (Tanuj Chopra), about an illegal gun dealer facing a difficult decision; Andy (Andrew Ahn), a portrait of a couple who takes their six-year-old son to a shopping mall for a relaxing afternoon; Topi (Arjun Rihan), situated amidst the turbulent partition of India circa 1947, where a young Hindu boy has a chance encounter with a stranger; Master of His Domain (Eric Elofson), the story of a young teenager who just wants to masturbate, but can't because his dead grandmother will do anything to stop him; Space Cadet (Paul Moore), whose seven-year-old protagonist's vivid imagination takes her on a surreal adventure from her bedroom closet into outer space; and Ajumma! Are you Krazy??? (Brent Anbe), a screwball comedy about three Asian women addicted to Korean Soap Operas and the six-pack chiseled Michael Park.

A special trio of Stravinsky-inspired film, programmed in celebration of Basil Twist’s Petrushka, being performed Nov. 11—21 at the Paramount Main Stage. (One ticket for all three programs.)

In 1966 Igor Stravinsky visited Toronto to conduct the CBC Symphony Orchestra for a major musical event: the recording of his Symphony of Psalms. The National Film Board of Canada was there, filming the maestro as he rolls up his sleeves and leads the orchestra and chorus. An informal study of a giant of the 20th century, Stravinsky documents the historic recording and follows the composer on his journey to Hamburg. On the ship the 80-year-old jokes that he is not sea sick, but sea drunk; an interview with Stravinsky’s wife, American dancer and artist Vera de Bosset, leads to a discussion of Stravinsky’s special relationship with the ballet; later, a shared scotch with Nabokov offers an intimate glimpse into a meeting between old friends.

A cutout animation version of color noir set to a section of Stravinsky's Firebird creates a sinister, perfumed world.

Stravinsky at home in California discussing his work with Rolf Lieberman, conducting an orchestra rehearsal in Hamburg, holding a press conference in London, and discussing creativity with old friend Balanchine. “Not constantly asking Stravinsky to do unnatural things, not filming the whole time, but building a friendship that would last a lifetime—his! Stravinsky had been filmed by CBS and didn’t like it; then he was filmed by CBC from Canada and hated it… Stravinsky loved this film and it was shown everywhere except in America…  Stravinsky had a wonderful habit of shifting languages in mid-sentence. When we tried to sell [the film] to American TV they gasped, “But he talks French!” It ran for months in a theater in Paris. We retained the American rights to the film and never sold a single copy!” –Leacock “Leacock whispers in your ear along the way, which gives the film a sense of personal discovery.” - D A Pennebaker
Saturday, Nov. 14 at 9:30 p.m.

In concurrence with Petrushka (on the Paramount Mainstage) and the screening of two Stravinsky documentaries, we present Ken Russell's portrait of Tchaikovsky, whose compositions biographer Anthony Holden describes as the bridge between Russian folk music and Stravinsky, the composer who transported Russia into the world of 20th century music. Acknowledged more for its creative indulgence and stylistic embellishment than biographical accuracy, Russell’s depiction of Tchaikovsky’s life is a feverish melodrama, emphasized by rapid montage editing and surreal imagery. Russell’s narrative, punctuated by dream sequences and flashbacks and employing lively handheld camerawork and vibrant color palettes, is a frantically paced characterization illustrating the tortured past and sexual frustrations of the famed composer. The second in Russell's series of pseudo-musical biopics, The Music Lovers features a score consisting of selections from several Tchaikovsky symphonies. “Ken Russell fantasia—musical biography as wet dream.” –Dave Kehr

The second in our series of selections from the World Cinema Foundation, Touki Bouki is a bold statement from a singular figure of Francophone African cinema. Its striking montage, cinematic flourishes and playful characterizations are indebted to Eisenstein and Godard and the European New Wave, and its story and milieu distinctly rooted in the Senegalese landscape of the early 1970s. Lovers pursue their dream of reaching an idealized Paris, engaging in theft and deception to pay their way. Their comic misadventures and youthful fantasies play out amidst a hybrid society of pastoral and swiftly modernizing cultures. Souleymane Cissé commended the Foundation for its achievement in giving Mambéty’s masterpiece a second life, calling the film prophetic for its relevance today, when “hundreds of young Africans die every day at the Strait of Gibraltar trying to reach Europe ... and find their own lucky star and happiness.”  “One of the greatest of all African films and almost certainly the most experimental.” —Jonathan Rosenbaum, Chicago Read

In Japanese with English subtitles

Fumie Nishikawa’s portrayal of the social dynamics among adolescent girls is an uplifting tale of perseverance and the power of self-expression. Yuki, a hearing-impaired middle school student, joins her community’s youth dance team; Nishikawa delicately explores the misunderstandings and forged friendships that follow, as Yuki’s determination and commitment eventually earn her a leadership role among her peers.  A coming-of-age story featuring arresting landscape photography and zealous performances, The Azemichi Road is a genuine family film, inspiring children to follow their dreams while underlining the indispensability of human kindness. As yet unreleased in the United States, The Azemichi Road has received accolades at several children’s film festivals across the country.

This month Emerson Presents welcomes Jane and Terry Semel Chair in Screenwriting Jay Cocks. A two-time Oscar nominee (Gangs of New York, The Age of Innocence), Cocks is teaching an intensive writing seminar this semester, and has chosen to discuss The Green Room with the Bright Family Screening Room audience.

“This, for me, is a kind of lost film, and I wanted to find it again. In 1978, The Green Room opened tentatively and, it turned out, very briefly, then vanished. It can’t have lasted in theaters here for even a few weeks, and it disappeared even from home video, which is remarkable considering it is the work of Francois Truffaut, the most popular—you could also almost say “beloved”-- of all the French New Wave filmmakers. I didn’t manage to see it until a few years later, when a friend recommended it and I managed to find a muddy tape. It was, for me, a revelation, a remarkable and intimate testament about love and loss and obsession. This will be a rare opportunity to see it the way it was meant to be seen, and to share a journey into the shadowy parts of a great artist’s spirit. - Jay Cocks

Note: The Bright Family Screening Room will be dark over the Thanksgiving holiday.