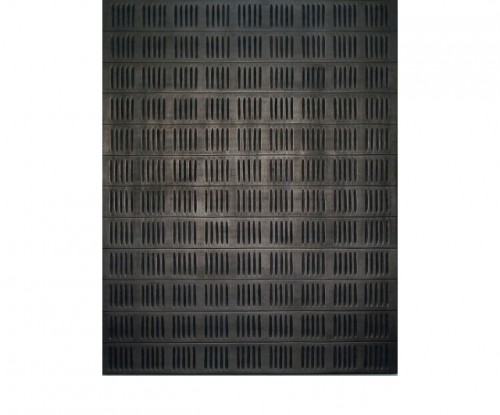 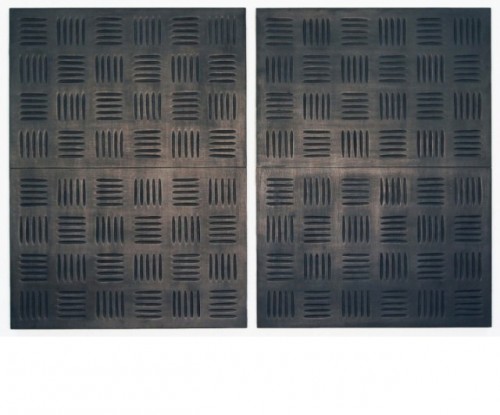 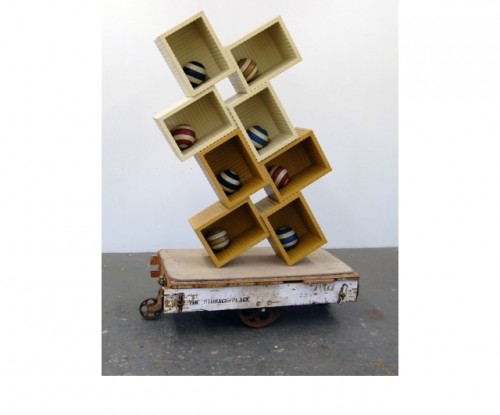 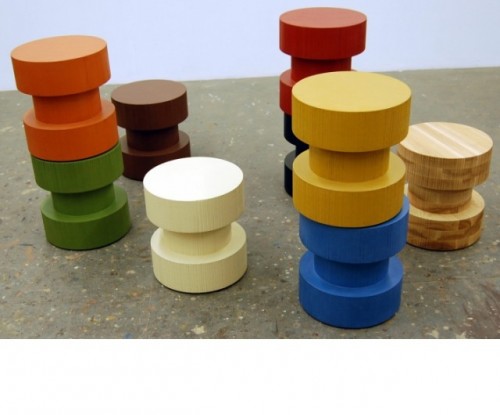 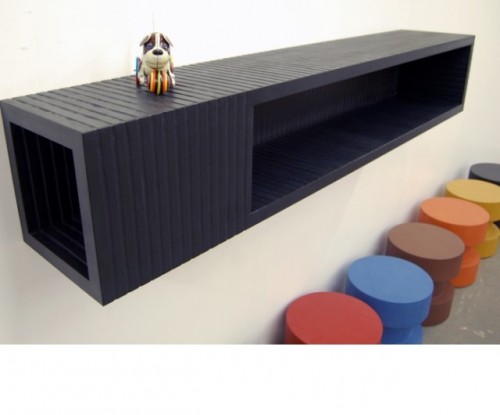 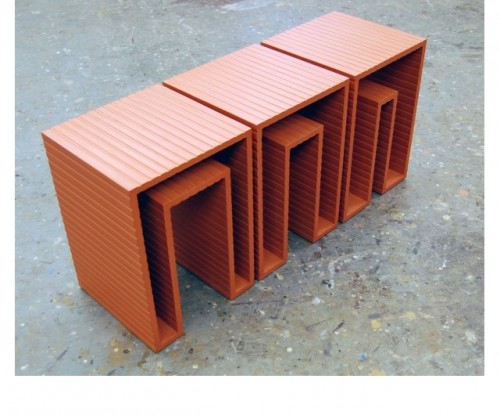 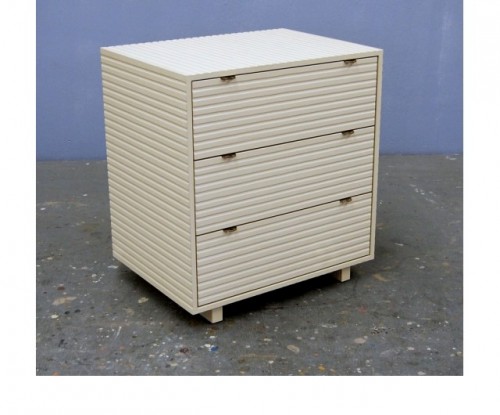 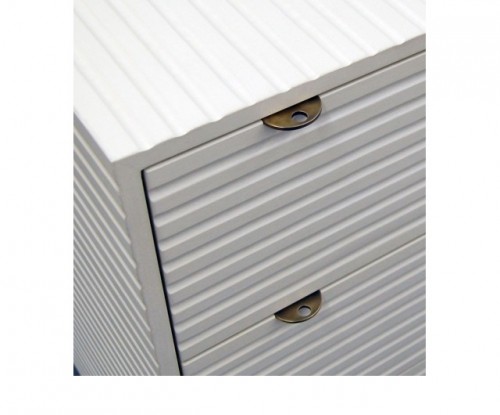 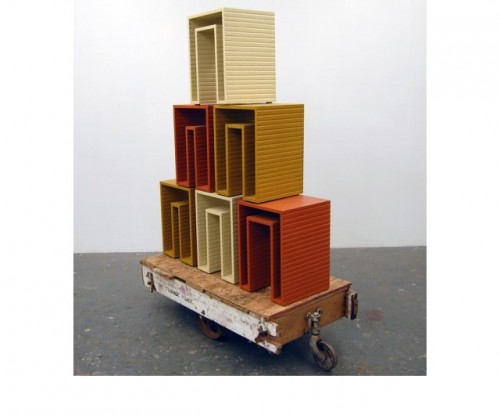 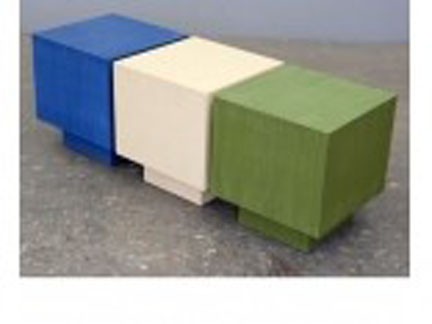 The current show at Gallery NAGA is John Eric Byers, Furniture and Carved Paintings and JEB JONES, Prototypes for Production. Actually the two man exhibit is a one man show: Byers is Jeb Jones.

JEB JONES is Byers' production company that is developing more mass produced products. Long known as one of the country's most distinguished studio furniture makers, he recently started this limited line of furniture.

At Gallery NAGA, he is showing prototypes for production. Here art and technology, design and manufacturing are lessening costs and allowing for a potential new group of buyers for Byers work.

In a recent conversation Galleryist Arthur Dion asked Byers why he started his new line. Byers responded with "Why not?" He went on to say, "I have always been interested in limited production work. It allows another means of self-expression...This is another way for me to be involved in the design process."

JEB JONES began as a company focused on sustainable materials and the intent to reach a wider audience. It is a furniture that still exhibits Byers' trademark simple geometry and hand-tooled surfaces.

Recognized as a leading figure of the third generation of studio furnituremakers, John Eric Byers is interested in "universal forms" as one basis for his solidly built, geometrically shaped pieces.

Made of solid mahogany, each piece of Byers's painted furniture or designed object is brought to life by the dense patterning of his thoroughly hand-carved surfaces and layers of milk paint.

Milk paint is an non-toxic water based mixture used as paint. It is made from milk and lime with or without pigments added for color. Milk paint makes use of the milk protein compound casein. It allows the paint to be a fast-drying, water-soluble medium.

This casein paint has been used since ancient Egyptian times as a form of tempera paint, and was widely used by commercial illustrators through the late 1960s until the advent of acrylic paint.

Though now much less popular, casein milk paint is a very "green" medium. However, milk paint has a short shelf life. Like a bottle of milk, even when refrigerated it will spoil and must be used within just a few days. It is tricky stuff to use. Byers is a master of it.

Byers' work is about pattern, repetition and much more now surface building. He utilizes geometric shapes as the basis of all of his designs, making the simple universal, the universal personal. His "canvas" is drawn from the sphere, ellipse, circle, square, cylinder and rectangle. His patterned surfaces are finely and skillfully consistently carved.

About a dozen pieces are included in the JEB JONES series in this exhibit. These works are grouped in the first room of Gallery NAGA. Each one is finished with a hand-painted, hand-finished opaque finish. Then a VOC-free (free of toxic variable organic compounds) clear coat is applied to each piece.

Though Byers is known for his monochrone, tan and white, buttermilk and snow or variations in black with most of his previous works, here he has fun with bright rather lush, rich colors. There is a vibrancy and visual appeal to each element.

In the other half of the gallery, there is a grouping of Byers' one of a kind works. This is his more muted and restrained objects and paintings. All of the paintings are black.

This is a black that is effected by the strong carving marks and textures creating each elements surface pattern. Light and shadow deepen and diminish the valleys and ridges between the raised surfaces. Light illuminates his work. The absence of color black actually shows color: yellows, greens and even reds.

The small stools called Pils have been set between the carved paintings. These are new direction for John's work. Instead of the activated and obsessive surface, Byers has abandoned the  carved, gouged or woven qualities for a simpler but just as sophisticated expression of form and color.

Meticulous. This is the word that can be ascribed to all of John Eric Byers' work. There is a masterful and precise craftmanship. From the use of special materials to the patterned or blank surfaces, each area is thouroughly worked, prepared, painted, and/or rigorously carved.

Byers has consistently been working at refining to the simplest, "purest" shapes and textures possible. While this has been previously achieved almost entirely in his more limited pallet, he is now exploring color as a bolder visual and somewhat visceral statement of his craft.

Now he is focusing on form and color. This thoughtful exercise will enegize his work in other ways. It will allow him a wider range in the exploration of expressive colorful forms.

Byers is a studio furniture master. His work is a visual and material treat.