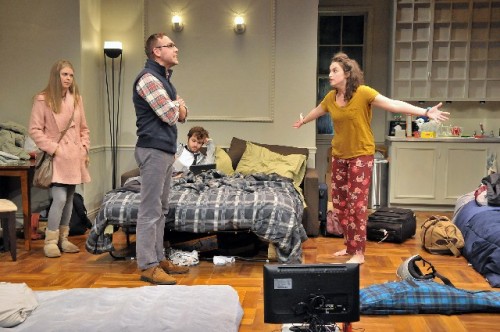 Liam and Daphna at War. 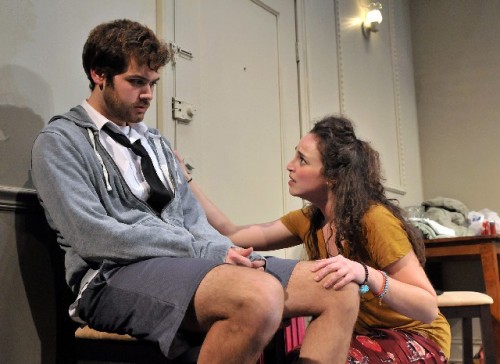 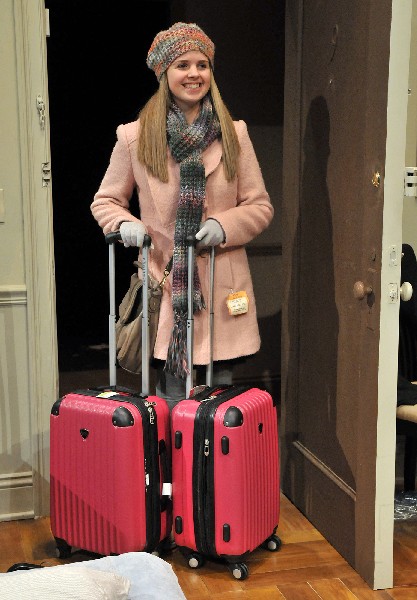 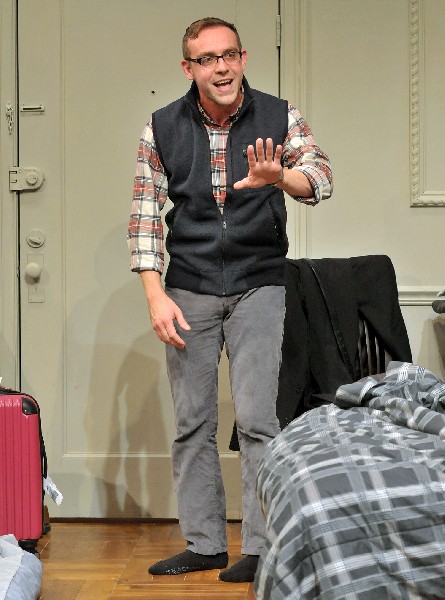 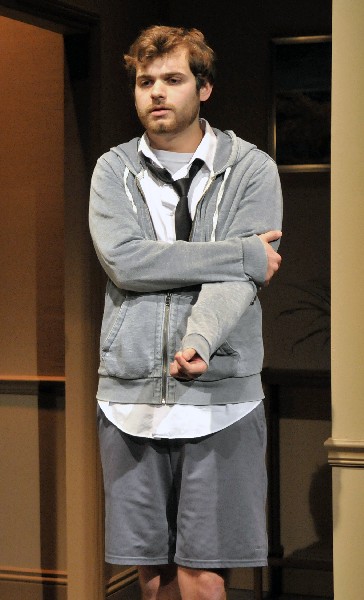 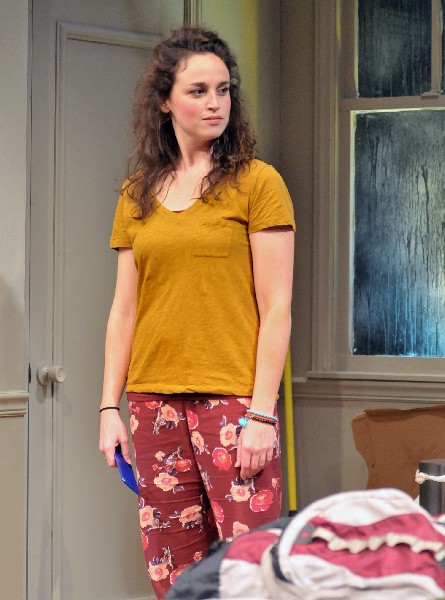 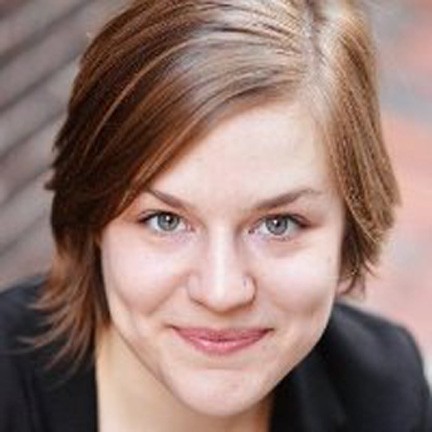 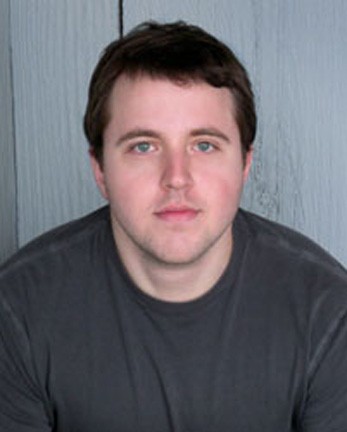 What is the old chestnut? You can pick your friends, pick your apples, pick your flowers and even pick your nose, but you cannot pick your relatives. That is the environment in which the often brilliant, if not badly titled, Bad Jews By Joshua Harmon now playing at the SpeakEasy Stage Company is located.

This dramatic comedy is a cousin versus cousin scrum that verbally wrestles and shoves a many layered, volcanic war zone of relatives' bloodline rivalry and what it means to be a family and to be Jewish in the 21st Century. Harmon skillfully demonstrates here that the universal outweighs the unique. Both funny and sad, this is a play about every family's relationships.

Though not necessarily Antisemitic, but certainly distasteful out of context, the title is a reference to nonKosher eating habits. It is a phrase that Jewish people use to and about each other at times. Others using it are not PC. Other references in the play use cruel stereotypes to describe one of the characters. The figure described is the strident, sometimes hilarious but cleverly bitchy self-righteous very knowledgeably observant Daphna (aka Diana) Feygenbaum (wonderfully played by Alison McCartan).

The character describing her is her arrogant, nonobservant, culturally indifferent and self-centered graduate student first cousin Liam Haber. The verbiage is so intense at certain points that I thought actor Victor Shopov was literally going to blow a blood vessel on stage.

The play opens late at night with Daphna in the apartment of Liam's younger brother Jonah waiting for Liam and his girlfriend Melody to arrive. The play is set in a messy cramped studio on New York's Upper West Side. The venerated grandfather, Poppy, a Holocaust survivor, has just been buried earlier in the day.

Liam and girlfriend Melody missed the funeral because he lost his cell phone on a ski lift in Aspen. Daphna is incensed. When Liam arrives, fire and brimstone prevail. Old insults and supposed transgressions are combustible oil drums set on fire floating on historical family waters.

Occasional secondary targets, Melody (Gillian Mariner Gordon) is more of an observer than a participant in the incendiary verbal explosions while Jonah (Alex Marz) is quietly hunkering down in a silent foxhole. Both actors are terrific in their roles.

A major conflict point in the play is the gold Chai ("Life") necklace that Poppy smuggled in and out of a concentration camp. This object of family affection is symbolic to each character interpreted in different ways. Daphna says Poppy wanted her to have it while Liam said that it belonged to him. The quest for the necklace is the dramatic arc in the narrative.

Cleverly directed by Rebecca Bradshaw, she arranges moments of tension and humor as smoothly honed production building blocks. Working with four wonderful young actors, she explores the strengths and weaknesses of each character rhythmically and at times potently poetically.

The fine technical crew created the overcrowded messy studio with beds and mattresses littering the stage like children's forts in a verbally toxic imaginary woods. Scenic designer Eric Levenson, costume designer Tyler Kinney and lighting designer Chris Bocchiaro all get the atmosphere and environment right. Deftly, sound designer Edward Young keeps the cacophony to a minimum and allows us to hear the verbal war barrages clearly and distinctly.

Not enough can be said about the quality of the superior ensemble. Each actor is outstanding in their own right. Harmon's nuanced characterizations and layered conficts are finely portrayed in this terrific production. McCartan inhabits Daphna making her unlikable but somehow a charming over-the-top zealot, while Shopov's smug Liam is as pretentious, self-centered and equally annoying as his female cousin, just different.

This player excellence is true as well of Gillian Mariner Gordon's Melody who eventually erupts as a fully realized character while singing and standing her ground. But, Alex Marz's Jonah is the quiet surprise of the show. His silences and nonverbal reactions immensely add to the story. What he does not say is greater than what he speaks. Marz's Jonah is the heart, no the soul of the play.

Playwright Harmon has brilliantly and very humanly let the play ask many questions. At the end of the play, it is almost impossible to choose sides. Do we side with the self-righteous passion of Daphna or with the self-entitled pretentiousness of Liam? We really can't easily choose. There is no either/other here. Provocatively, Harmon is right to suggest, Jewish or otherwise, that our family is ourselves.

The layered meanings of this excellent play are like those of a finely baked sophisticated pastry spiced and seasoned with delicious drama and humor.