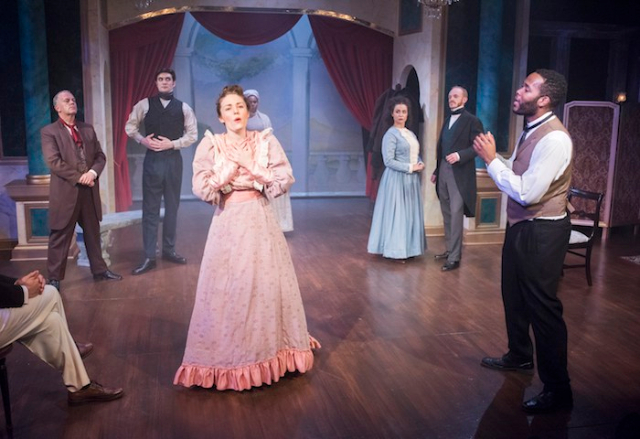 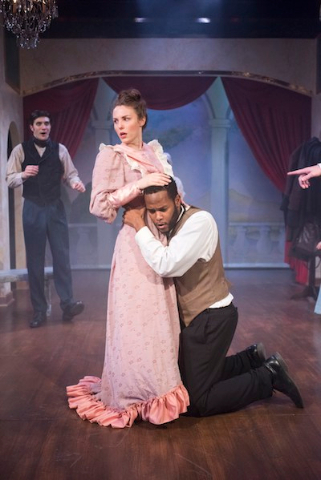 In 1833, an African-American actor named Ira Aldridge (Brandon Greenhouse) was the first black man to play the leading role in Othello in a London theater. Although the audience seemed appreciative, the newspaper critics were brutal in their descriptions, engaging in horrific racial slurs about his appearance and diction. Aldridge performed Othello just twice at Covent Garden.

Racial and social themes in 19th century theater are at the heart of Red Velvet, the play by Lolita Chakrabarti now being staged at Raven Theatre. Director Michael Menendian skillfully blends scenes from two 19th century eras and cities to bring the story of Ira Aldridge to life.

The play is based on the story of Ira Aldridge, a New York native who went to Europe when he could not succeed as an actor in the US. He’s an aging actor in 1867, performing in Lodz, Poland, in both the opening and closing scenes. The main action takes place in 1833 London when the famous Shakespearean actor, Edmund Kean, has been injured and unable to go on as Othello.

The theater manager, Pierre LaPorte (Matthew Klingler) decides to bring in his friend, Aldridge, to play the leading role. Unfortunately, Kean’s son, Charles (Tyler Rich), is also a member of the theater company and assumes he is to take his father’s place. When the cast members find out Aldridge’s identity, they are alternately amused, horrified and insulted.

Aldridge arrives, ready to go on that night. The troupe rehearses and Aldridge focuses on Othello’s homecoming scene with actress Ellen Tree (Tuckie White) playing Desdemona. A discussion of acting styles—classical vs. domestic—arises, as Ira tries to get Ellen to perform a loving welcoming scene instead of performing it in the more distant classical style. The other actors gasp as the black man embraces the white woman.

This long scene in act one involves a lot of talk about differences in acting styles, which is amusing to theater fans but perhaps boring to others. The standard among the Covent Garden troupe, and in most theater then, was the classical or “teapot” style in which the actor stiffly declaims, one hand on hip and the other outstretched like a teapot spout. Aldridge prefers the newer domestic style, which is more naturalistic, but still appears mannered to modern theatergoers.

After the first performance, the blistering theater reviews cause the theater board, suffering financial difficulties, to demand that LaPorte ask Aldridge to step down. The scene between Ira and Pierre ends with a breach between the two old friends. (Aldridge left London after the Othello performances and toured England and European cities performing for the rest of his life.) In the final scene, he is an aging and sick man, preparing his makeup for a wrenching final scene.

Greenhouse, who played a featured role in Raven’s Direct from Death Row: The Scottsboro Boys, gives a superb performance again as the confident, even arrogant, Aldridge. He is quite sure of his dramatic abilities but insecure as a man (as well he might be in 1833 London). But he was only guilty of acting while black.

The rest of the cast is very capable, as we have come to expect in a Raven Theatre production. White is excellent as Ellen Tree and Sophie Menendian does well in all three of her roles, as a Polish reporter, an actor and as Aldridge’s wife Margaret. Connie, the wise Jamaican maid, is played by Anna Dauzvardis, another member of the talented Scottsboro Boys ensemble. One criticism of the performances is that the many accents represented among the characters are a little uneven.

Chakrabarti is an English theater artist and writer. Red Velvet premiered in London and won several awards, including the Critics Circle Award 2012 for Most Promising Playwright. The play has been performed in the U.S. before but this is its first Chicago production.

Red Velvet runs two hours with one intermission. It continues at Raven Theatre, 6157 N. Clark St., through November 27. Performances are Thursday-Sunday. Tickets are $46 with some discounts available. Buy them online or call 773-338-2177.