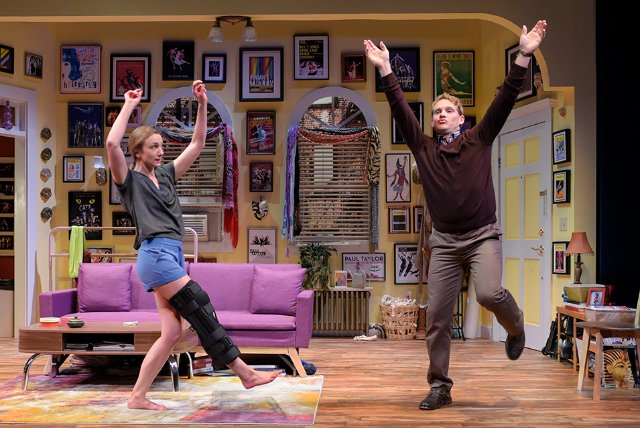 Many of us are broken in one way or another. In the case of Ever and Senga, it’s just more obvious. He suffers from Asperger’s Syndrome.  This form of autism, often marked by lack of empathy, is evidenced by  a poor ability to judge what is socially acceptable to say and do, and difficulty interpreting the meaning of facial expressions and the tone in people’s voices. She is a dancer recovering from a shattered kneecap. Their unlikely friendship is the basis for Mark St. Germain’s touching and funny play, Dancing Lessons, which goes by quicker than you may wish.

As an environmental scientist and professor, Ever has received a prize that will be presented at a ceremony. While he is capable of delivering a required speech, he is mortified at having to dance, which will also be expected. Not only does he not know how to dance, he is terrified of the human touch. Learning about Senga’s accident from their apartment building super, he introduces himself and offers her an outrageous sum for a one-hour dancing lesson, which he figures should be sufficient for his needs.

St. Germain gives us two characters that we can embrace, and they are portrayed with great sensitivity. Wide-eyed and effusive, Craig Marker is remarkable as Ever. Constantly fidgeting and often motor mouthing, he is usually oblivious to how funny things are that come out of his mouth. Due to his misinterpretations, he asks “Do you charge for sex?” and “Did I interrupt a suicide attempt?” – not exactly questions normally asked of a new acquaintance. We feel sad for his affliction but admire that he has harnessed his intellect for the better.

A perfect foil to the unguarded Ever, Sharon Rietkerk finds the right nuance as Senga. In contrast to Ever’s clumsiness, and despite a knee brace, her Senga is lithe and graceful. Yet she betrays a certain diffidence. Her pain and her dedication to her craft are palpable from the outset, and in time, we learn of her secrets and fears. Rietkerk alternately reveals anger, depression, defensiveness, offensiveness, fear, joy, and compassion as her character faces an uncertain future and deals with a bombastic intrusion into her life.

Despite the limits of 90 minutes, two characters, and mostly one room, Dancing Lessons covers a lot of ground. It’s about relationships and truth.  It’s also about change which Ever argues brings pain to both the autistic and the neuro-typical, but is necessary to lift us from the comfortable dull. And while some incidents in the story are treated simplistically (which can’t be discussed without spoiling), the resulting compressed timeline facilitates the pacing.

The play is a bit preachy at times in a couple of ways. First, a great deal of explication is provided about Asperger’s and autism throughout, which informs those who may not be familiar with the condition. This does relate. In addition, the playwright didn’t randomly make Ever an environmental professor but sees this as a drumbeat opportunity to alert the audience to our impending doom. Though his concern is shared and well supported, it is shoehorned into a story with little connection to it.

However, a script full of laughs and things to think about; great direction by Joy Carlin and fine creative elements by her team; plus two terrific performances yield an entertaining evening. And the development of the themes provides enough substance to make it more than just a forgettable rom-com.

Dancing Lessons by Mark St. Germain is produced by Center Repertory Theatre and plays at the Lesher Center for the Arts, 1600 Civic Dr., Walnut Creek, CA through November 17, 2018.