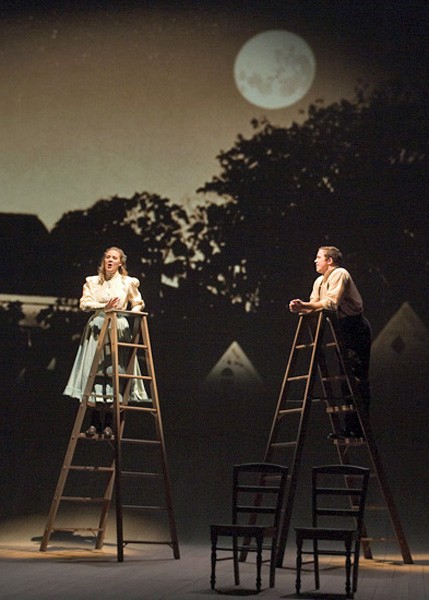 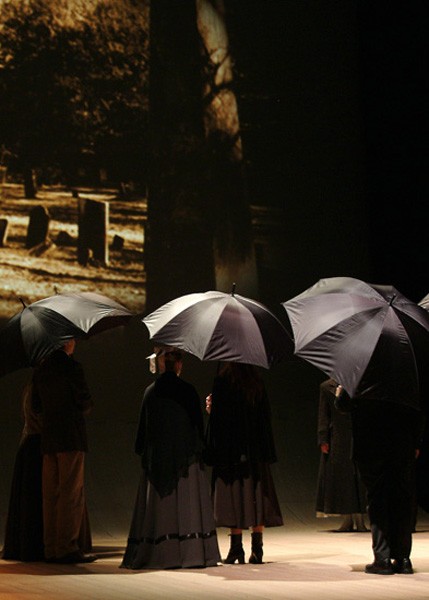 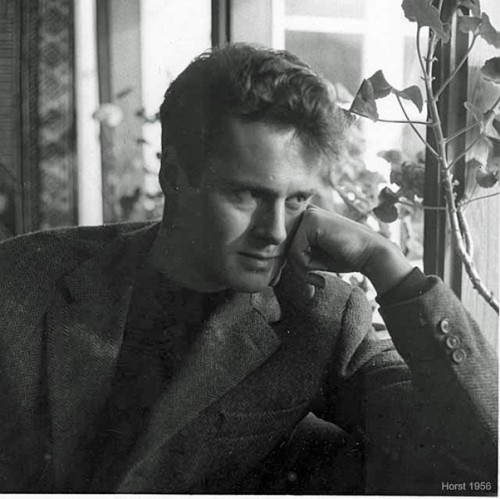 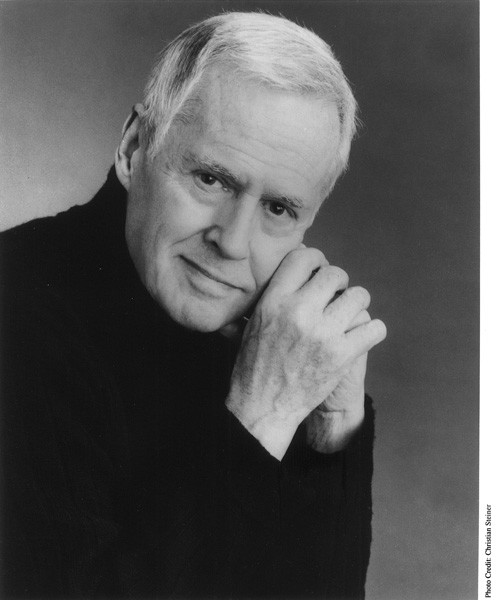 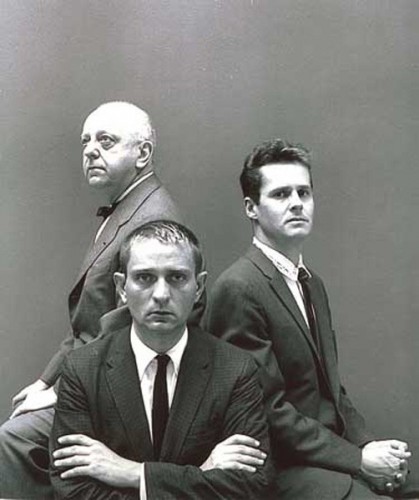 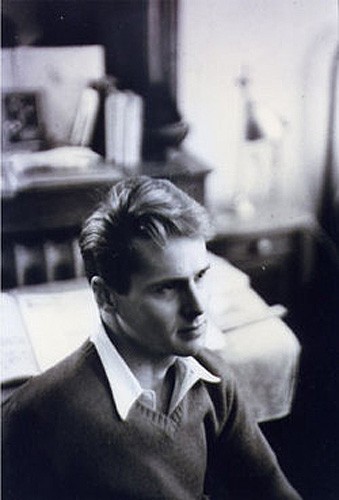 Rorem was a sharp, witty and handsome young American who took Paris by storm in the 1950’s. 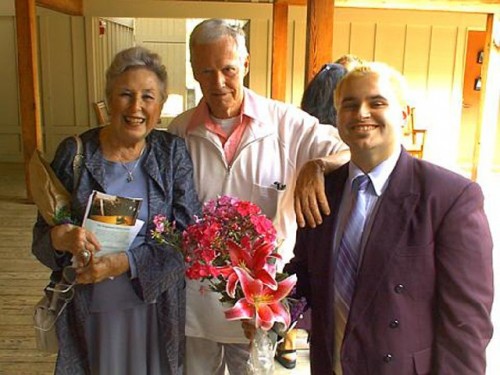 Jason Ferrante (R) seen here with Ned Rorem (M) and Phyllis Curtin (L) after performing Ned’s "Evidence of Things Not Seen" at Tanglewood, 2001. Jason recently sang the role of Don Basilio in Marriage of Figaro with the Berkshire Opera. Photo by Jason Ferrante. 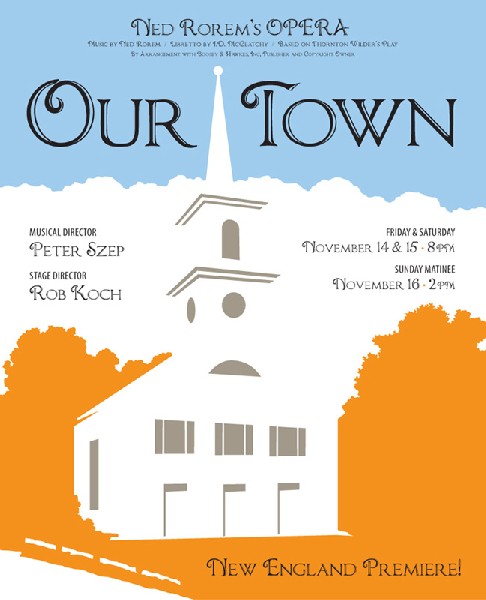 The anticipation is building for the New England premiere of Our Town, the opera on November 14-16 in Peterborough, NH.

On Thursday, Ned Rorem, America's greatest creator of art song and one of the finest of living composers, turned 85. Yet unlike five years ago at his last significant birthday, there are few national performances of his works, even in leading music cities, marking the occasion.

Friday night there will be a chamber program at the Church of St. Matthew and St. Timothy on W. 84th Street in New York.  Soprano Mary Wilson will perform Songs Old and New Nov. 1 with the IRIS Orchestra in Germantown, Tennessee. Later in the month, the Eleven Studies for Eleven Players will be heard in Urbana, Illinois, and Our Town will be mounted by the Raylynmor Opera in Peterborough, New Hampshire. In January Evelyn Glennie will perform the Mallet Concerto, a work written for her, in Germany.

Still, considering Rorem's reputation and achievements, the lack of attention is striking. Not that the composer is eager to attend any events.  "I hate to travel," said Rorem recently, speaking from his Manhattan apartment. "Even for a world premiere, I hate to travel. The older I get the more I hate the taxis and the waiting around at the airport."

Composer, author and diarist, at 85, Rorem  speaks a bit more slowly but remains as sharp, witty and opinionated in conversation as the preternaturally handsome young American who took Paris by storm in the 1950s.

"I can't remember what I'm working on now," he says.  "I have a touch of Alzheimers."

"I'm okay," he says. "I complain a lot and I'm tired all the time. But everyone says I look good.  And I think about sex every minute.  How about you?"

The relative neglect of Rorem on his 85th birthday is all he more perplexing considering how active  he has been in recent years. His operatic setting of Our Town was premiered in Bloomington in 2006, and encored at the Juilliard School in New York, receiving glowing reviews. Rorem takes pride in the fact that he managed to live long enough to get the rights to Thornton Wilder's celebrated play, besting Copland and Leonard Bernstein.

And he has hardly been resting on his laurels, with such recent works as the Mallet Concerto, Four Prayers for Flute and Piano, and others. "I think I'm supposed to be writing a Saxophone Concerto for Marsalis. That will be my next piece. Got any ideas?"

Five years ago on his 80th , Rorem was withering about the state of American culture and the music industry. He cites the even more drastic decline in numbers of critics and space devoted to classical music at newspapers, the reduction of which in the last two years has only accelerated.

"There are a few good critics but they don't get around very much," said Rorem. "I haven't counted them, but for pop music there's about 150 in America. For opera and symphonic music there are about fifteen. There's a few in New York, at New York magazine for example and at the Times, but fewer and fewer.

"The world in general is becoming de-cultured. Perhaps there never was an audience for the 'best things.'"

He also remains acerbic about the conservative programming of most orchestras and musical organizations, with the  emphasis on Beethoven, Tchaikovsky, Rachmaninoff and populist crossover even in New York. "The general public couldn't care at all about what you and I are interested in, in other words, serious contemporary music."

"I would think that performers would get sick of all of that. The same thing over and over and over," Rorem says of the concerto and symphonic barnburners. "But of course 150 years ago the only music that was played was contemporary music."

Rorem has a novel theory that newspapers and critics shaped the county's musical conservatism in the early 20th century, entrenching a certain Eurocentric repertory because that's what newspaper people believed their audience wanted to hear and read about.  "The general public avoids contemporary music. But of course now most contemporary musc is comparatively listenable.  It's a twentieth century thing."

Not that all modern styles are to his personal taste. "I don't rush out to hear Elliot Carter. I don't know what other people hear in him. Because he's difficult, therefore he's good."

Rorem prefers composers who, like himself, tend to write in a tonally centered, more lucid and communicative style. "Mark [Adamo] has a certain gift. So does Corigliano. Corigliano's the real thing. He can do anything."

David Diamond is a composer Rorem believes remains underrated, and, somewhat surprisingly, says Diamond's song-writing influenced his own emphasis on vocal music.  "As a person he was difficult, but he was very disciplined and very well organized," says Rorem of Diamond. "They're not all great but certainly twenty songs of David Diamond's are as good as anyone's in history. I miss him.  I think about him quite often."

Rorem  is writing less now and orchestrating a few songs, but says his greatest motivation remains a fee.  "I like to be commissioned to do things. But If someone asked me to do a guitar concerto, I would turn them down. I like the money, but . . . ."

"Left to my own devices, I would only write vocal music and probably just small pieces for voice and piano. But, of course, there's no money in that."

Rorem's works span the genres, with three underrated symphonies, five string quartets, concertos for several instruments, from piano, cello, and violin to percussion and English horn,  and his many individual songs. But perhaps his greatest legacy is the late cycles Aftermath and Evidence of Things Not Seen. The latter, a sprawling 90-minute epic of 36 settings for multiple voices, was premiered in Chicago a decade ago and still seems like Rorem's valedictory summing up of his art and his life.

"If I died now, I think Evidence of Things Not Seen is a pretty good piece," he says with typical understatement of his own music. "I think the opera Our Town is a good piece too. It moves me and I'm seldom moved by my own music.

"I've written everything. And I think technically everything I've done is pretty good. Like the string quartets. But I guess I'd like to be remembered for my vocal music."

His art often conveys a strong, philosophically centered sense of morality but Rorem remains an agnostic. "I was raised a Quaker.  But my mother and father became Quakers, not so much for the God part of it but for the pacifist part of it. My mother's younger brother was killed in the first world war and she never got over it.

"I don't believe in God. There is no God. But I believe in pacifism and good works."

Rorem's witty, compulsively readable diaries have seen their last imstallment, as he says he has no desire to write prose anymore and besides his typewriter is broken. The composer also has no desire to learn how to use a computer. "I don't feel I'm missing anything." He asks if any writers still use typewriters and is told, probably very few because with a computer, you can write, edit and revise more quickly and easily.  Rorem thinks for a moment and says, "But maybe that's not good."

He takes heart from the fact that he shares a birthday with Franz Liszt and Sara Bernhardt. And though he is scathing about the media and the crassness of so much domestic pop culture, he believes that today's American composers stand head and shoulders over their international counterparts.

"Even with all the vulgarity and despite everything, artistically I think America is the most interesting country in the world today," says Rorem.  "It's certainly more interesting than France or Germany.  "I can't really name you any composers in Europe that I find interesting. But I could name a dozen American composers I find of interest. I couldn't even name any European composers I find uninteresting."

Lawrence A. Johnson is the former classical music critic of the Miami Herald, and, prior to that, classical music writer at the South Florida Sun-Sentinel for six years. He is a regular contributor to Gramophone and Opera and has written for The New York Times, Chicago Tribune, Boston Globe, Opera News and The New Criterion. You can enjoy more of his cogent analysis and comments on  music at South Florida Classical Review

Ned Rorem celebrates  his 85th birthday this week. His opera, Our Town will receive its first New England production on November 14-16, 2008 in Peterborough, NH and February 12-16 of 2009 at Tufts University.