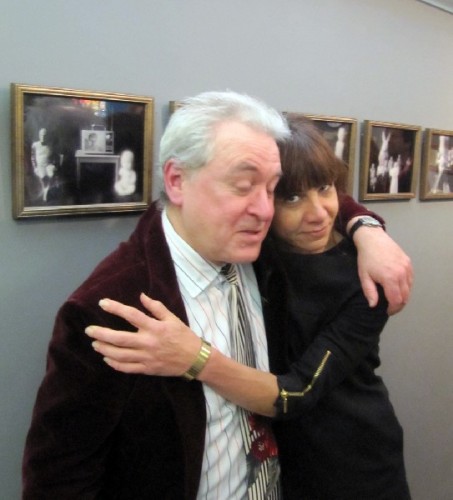 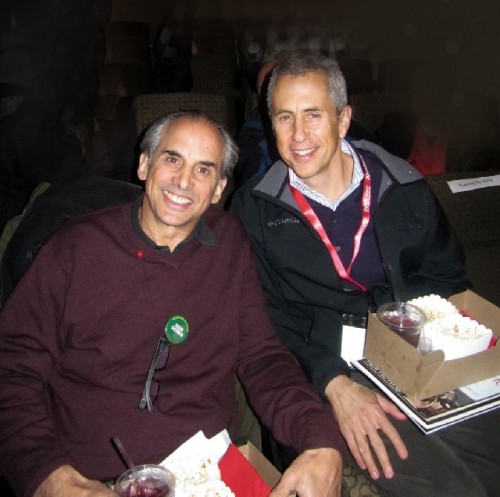 Filmmaker Roger Sherman, left, and entrepreneur, Danny Meyer, hunker down with snacks from Mezze for a night at the movies. 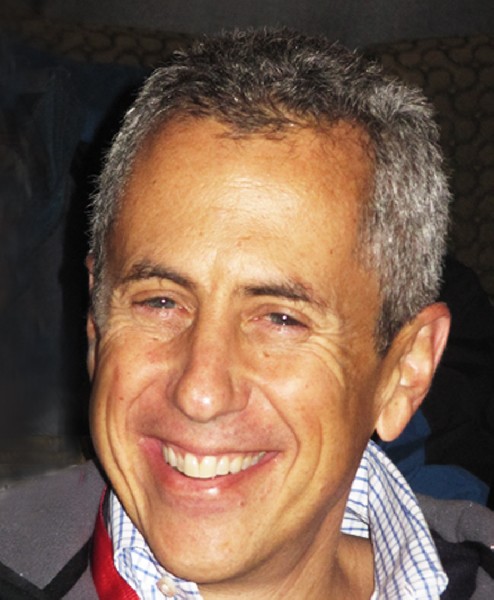 Meyer doubled his New York restaurants from two to four. 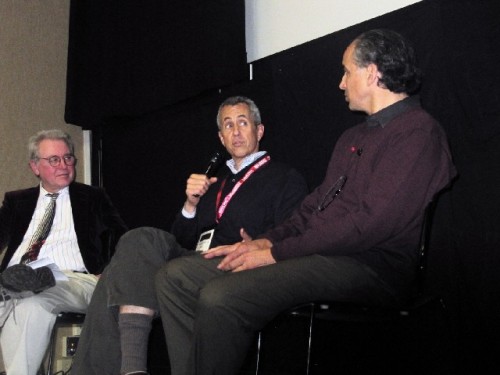 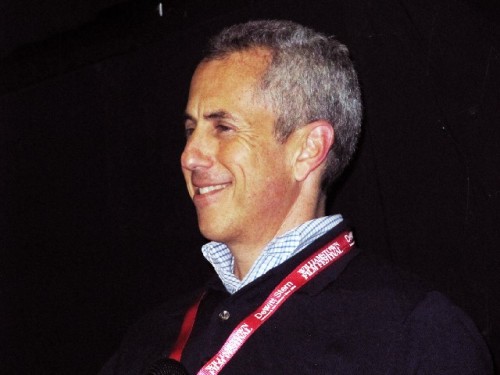 Meyer plans to sell Eleven Madison Park to its chef and general manager. 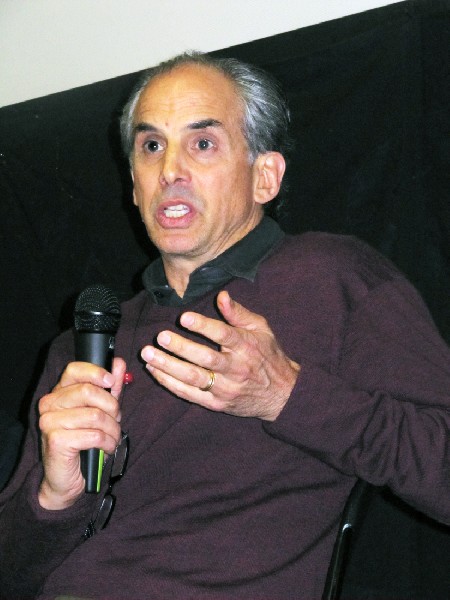 It took Sherman nine years to shoot and self finance the film on Meyer. 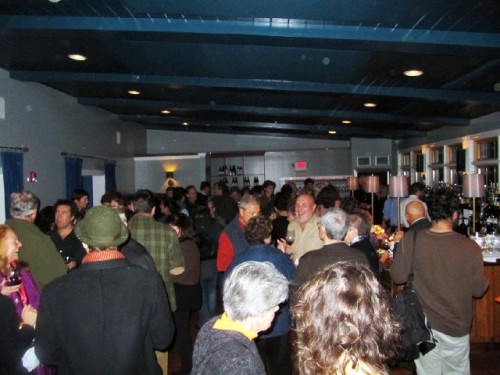 The well attended tasting after party at Mezze. 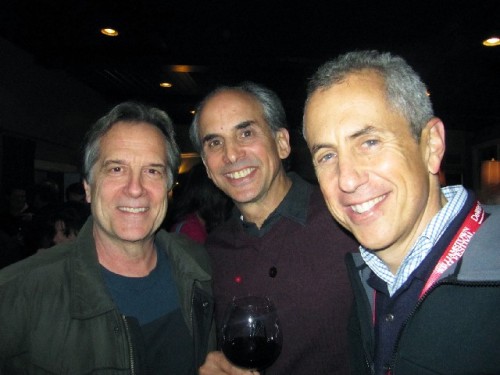 The artist and WFF board member Steven Hannock with Sherman and Meyer at Mezze. 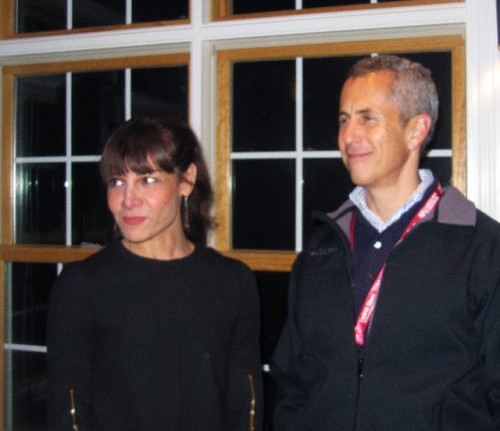 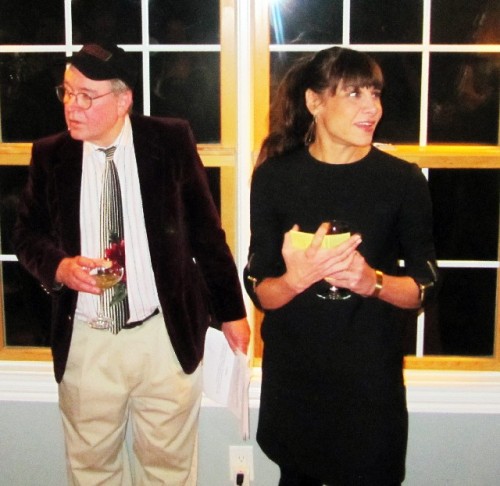 It was a nasty night.

The first snow of the Berkshire season.

Not even frigging Halloween. With a storm forecast for the weekend.

But that didn’t daunt a sold out house at Images Theatres.

We gathered for a delicious documentary The Restaurateur by Roger Sherman that resumed the 13th annual Williamstown Film Festival.

Just like that it went from summer to winter. Stomping our feet and shaking off the snow we were greeted by Nancy Thomas co-owner of the upscale restaurants Mezze in Williamstown and Allium in Great Barrington.

She handed us boxes containing drinks of fizzed Condord grape juice, exotically flavored pop corn, and a variety of bon bons. Following the film and discussion Thomas hosted a “Tasting” party at Mezze.

Through a variety of TV shows chefs have emerged as celebrities and stars. Gordon Ramsey is as recognizable and bankable as Johnny Depp. Ambitious mothers basking on  beaches in the Hamptons brag that their kids are not off to Harvard, MIT, or Yale but this or that culinary college. Perhaps one day to open their own restaurant.

I just love all those food shows. They make me drool over the culinary masterpieces that we simply can’t afford.

So I was languishing in foodie heaven last night at Images. For nine years Sherman tracked the progress of entrepreneur Danny Meyer as he struggled to navigate through a gauntlet of obstacles to launch, more or less simultaneously two upscale restaurants Eleven Madison Park and in another part of a vast 30,000 square foot space the Indian/ avant-garde themed (and now closed) Tabla.

The eventual owner of four (now three) restaurants in the Union Square (14th Street) and Gramercy Park/ Flatiron region of lower Manhattan he started with Union Square Café and then added Gramercy Tavern. After a dozen years of successful operation he planned to double his business.

In the opening shots we see the low key, soft spoken, baby faced Meyer walking through a vaulted space with enormously high ceilings and vintage, art deco detail. There were historical landmarks restrictions to preserve and enhance those design elements.

It was intriguing to see him negotiating the space wearing an enormous, shapeless overcoat that seemed to swallow and dwarf an entrepreneur with such towering ambition. He would walk about the space informing us of the placement of banquettes, kitchens and bars. The area was so huge that he conceived the idea of carving off a second restaurant with a very different theme.

For the main dining room of Eleven Madison Park he debated but dismissed the idea of a bistro or brasserie serving French cuisine. There were more then enough examples of that in New York. He worked with his  executive chef, Michael Anthony, from Gramercy Tavern on possible food concepts and to find the right chef.

There were setbacks followed by setbacks, primarily in construction and permits. The original late summer launch date dragged into winter. It was ironic to learn that in the then booming economy there were problems finding construction workers and the kind of talented staff required of the two new restaurants.

The head chef who was on salary for some 14 months during the protracted development could not keep up with the pressure. There was a tough decision to let him go and develop another food concept and head chef. A line chef from Gramercy Tavern was ultimately hired for the all important anchor of the kitchen.

When Eleven Madison Park finally opened it earned a disappointing two star ranking from the New York Times. The consensus among critics was that such a magnificent space required fine dining beyond the satisfactory but less than spectacular food and service being offered. The chef was moved into a new catering business launched by Meyer and the search was on for a new head chef.

An associate was dispatched to eat his way down the Atlantic coast, across the Gulf, here and there in the interior, up the West Coast ending in San Francisco. Hey, it’s a tough job but somebody has to do it.

Humm required several months to decide. One does not wish to take on potential failure in New York. It became a mandate for Humm and general manager Will Guidara to pursue the all important four star designation of a top restaurant.

That entailed the risky investment of pouring more money into the restaurant. Chairs were removed. A table that once seated four was reduced to two. For the highest ratings there needs to be a sense of uncluttered  space and attentive service. In the kitchen, where there had been three sous chefs, that was increased to fifteen. Each was responsible for just five tables. That assured the maximum attention to detail.

In reviews the restaurant was upgraded to three and eventually four stars.

During the Q&A I asked Meyer what risk was involved in such a steep increase of operating costs in a challenging economy. In an answer that evoked laughter from the audience he said “That’s why I’m selling the restaurant.” To, as it turns out, Humm and Guidara. As he explained it is their heart and soul that is now in the venture. It also frees him for other projects.

Tabla, which earned three stars from the New York Times closed in 2010. As Meyer saw it the restaurant had too many chairs to fill and they needed to be full all of the time in order to cover expenses. Also high concept Indian food had too much competition from numerous cheaper alternatives.

With insight Meyer described that within the first few months of launching a restaurant there is a learning curve of discovering mistakes of management, staff, décor and concept. To be handling that simultaneously with two new restaurants was particularly challenging. Generally restaurants fail within the first months or year of opening. In New York for high end ventures the competition and turnover is particularly brutal.

The Times reported that “Floyd Cardoz, the chef and a partner in the restaurant, whose interpretation of Indian cooking had earned him three stars from Ruth Reichl in the New York Times in 1999, said he will remain with Mr. Meyer’s company, Union Square Hospitality Group.

“I will be working on a new project for Danny,” he said. “Not Indian. I am classically trained.” He cited his years as executive sous-chef at Lespinasse.”

Since the restaurant closed Cardoz won a TV Top Chef competition. He now has the celebrity status that will be a major draw when he and Meyer launch a new venue to showcase his skills.

In a conversation with WFF artistic director Steve Lawson there was a melancholy note as Meyer discussed his father, from Saint Louis, who twice went bankrupt. The important difference is his dad surrounded himself with yes men. Danny strives to find the best possible staff and then let them do their thing. Meyer also discussed the importance of being a living presence in his restaurants. Particularly during the day in preparation for evening service “when things happen.”

I asked him how the cost of dining had changed when Eleven Madison Park morphed from two to four stars. He described the average individual cost at about $69 when it was a two star restaurant as now $150 per person.

Despite the sharp increase in overhead “We are grossing more money than ever. Particularly as we sell out not only the main dining room but also the all important private dining rooms. That capacity drives down your food costs. So you don’t have to worry about how many ducks you sell on any given evening.”

Which, from an entrepreneur’s point of view, sounds positively ducky.

Kind of mind boggling when you think about it with millions out of work and Wall Street protests all over the U.S. and around the world.

“The rich are different from you and me", says Nick Carraway in Scott Fitzgerald's Great Gatsby.

As Marie Antoinette put it “Let them eat cake.” Her pastry chef may have earned four stars but we know what happened after that.