Knives in Hens at 59E59 Theaters 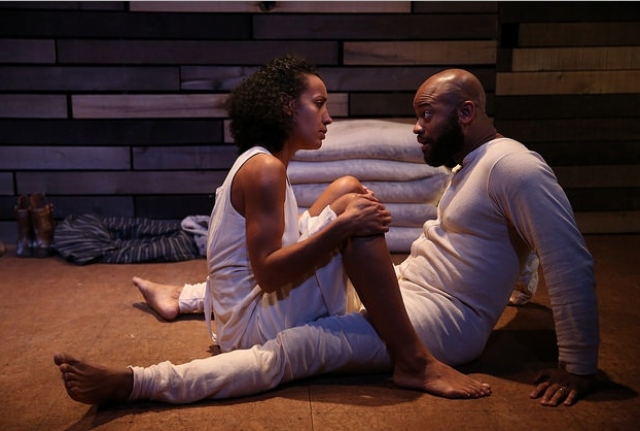 The brilliant Robyn Kerr with her Man.

Knives in Hens is an ineffably moving theatre piece, a three-hander which depicts the struggles of a putatively ignorant farm girl who lives in indeterminate space and time. Her movement toward growth is specified in a wish to name the world she sees.

At first the nameless Young Woman (Robyn Kerr) is trapped in an erotically charged yet deeply unsatisfying relationship with Pony William (Shane Taylor). He is  a farm hand who seduces and betrays her.

Sex scenes bracket the piece. They are choreographed to suggest the heat of the initial attraction between Young Woman and Pony William. They transform into a delicate yet just as erotically charged moments between the Young Woman and the Miller (Devin E. Haqq) . He can fulfill her in ways she had not imagined. He has books on his walls. When he gives her a pen, she is able to write her name for the first time.

The two male characters are cast and dressed to resemble each other, but there is no question that with the Miller, Young Woman is moving up in the world and through history. Paul Takacs directs the mysterious journey with perfect rhythms and suspense.

Miller was one of the first occupations in pre-historic times. Grain always had to be ground. Millers often held dominant position in towns, because they had more money. Their work was necessary for a group to be fed.

As Young Woman struggles to name, she tells us that putting a word on an object is like putting a knife in the hens she has to kill for food. The impact of the analogy immediately strikes the listener but its meaning remains elusive in the play.

The play is myth-making at its best. Language itself weaves a spell. Young Woman has poetry in her soul. Charles Burnett’s film Nightjohn shows the power of learning to read in the slave quarters of 19th century plantations. The twist here is not that Young Woman reads, although we sense that during her future life with the Miller she will, but this business of naming.

What after all is in a name? It is clear that Young Woman (with no personal name herself) gets pleasure from trying to describe the object she has named. Much is made in the play of Pony William’s need to call her a “field,” which he alone can plow and reap. She opens up the definition and in the end will reject it. This is the power not of naming but of definition and meaning. To enjoy this production it is not necessary to answer the questions the play provokes. Contemplating meaning is a tantalizing after effect of this powerful new myth.

The set, which is smashed up close against the audience, is like the game Jenga. The wooden bricks are lined up irregularly. At times they are lit to peak through. When the Miller’s new stone arrives, it is lit to fill the center of the Jenga wall of the stage.

The intensity of the experience is magnified by closeness. The cast is all black, which makes a not so subtle reference to plantations life in this country. (It has been cast white in other productions).

Ninety minutes of riveting theatre rolls by, punctuated by movement, lighting and especially the naming of Young Woman.  This is theater at its finest.