A Week on the Run 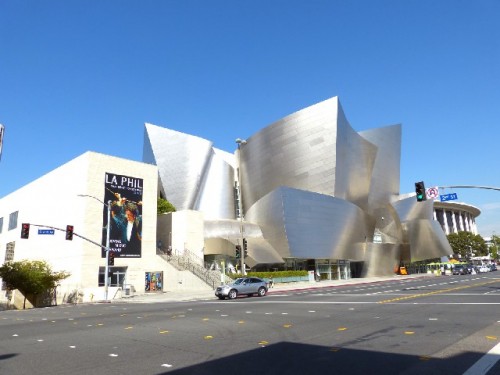 Home of the LA Philharmonic designed by Frank Gehry. 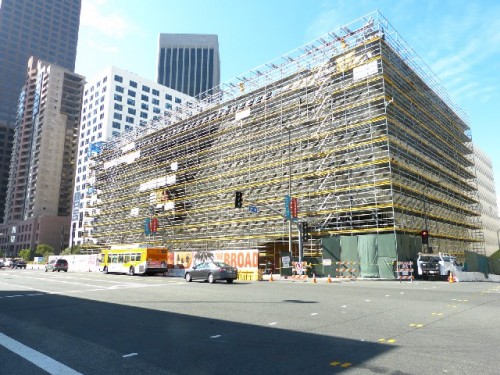 The Eli Broad Museum of Contemporary Art will open in 2015. 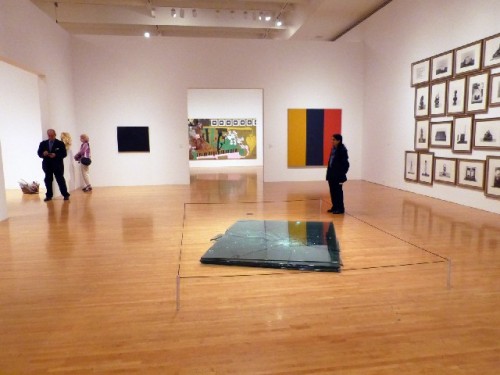 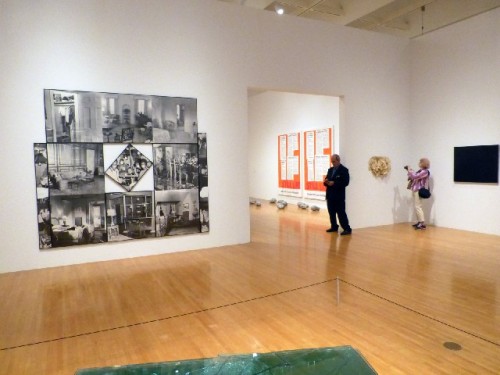 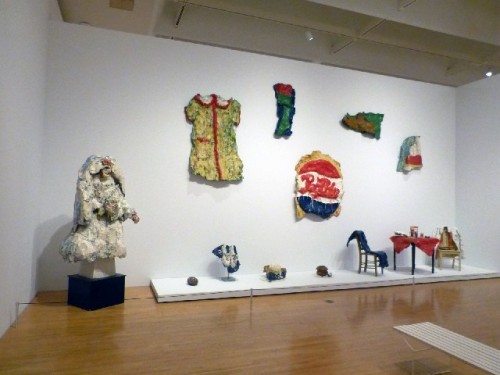 A collection of early works by Claes Oldenburg. 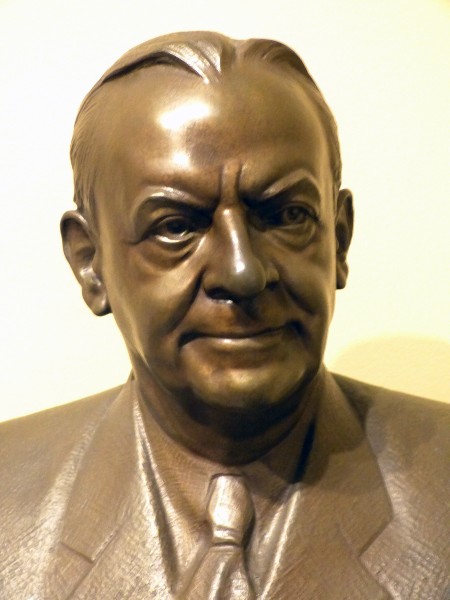 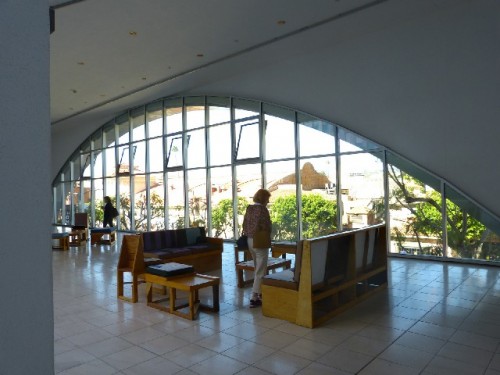 Arched view from the Hammer Museum. 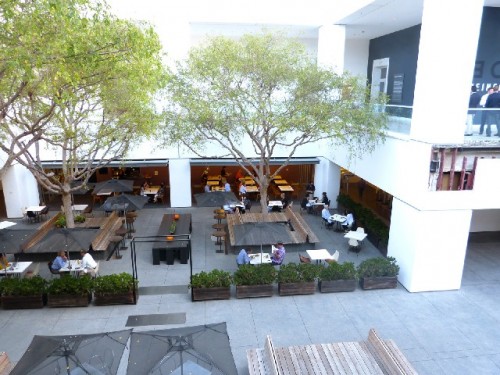 Courtyard of the Hammer Museum. 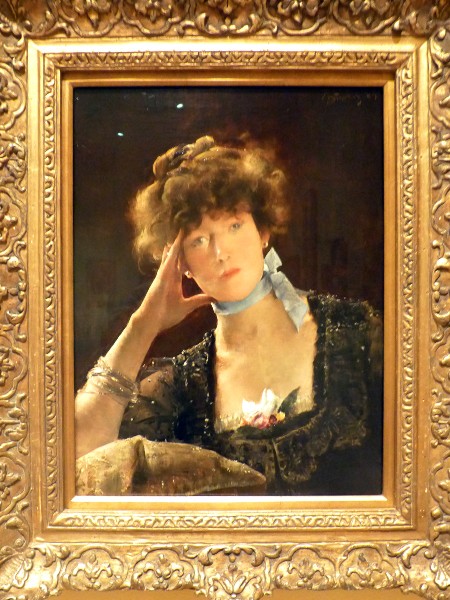 Portrait of the young Sarah Bernhardt by Alfred Stevens in the Hammer Museum.

Heineken’s Portraits of Susan Sontag on view at the Hammer Museum.

Our quaint condo was south of LA in the older Sunset community equidistant between newer Huntington Beach as well as the old and new Long Beach areas. It was a brief walk to the Pacific with surfers catching waves.

Daily trips to museums averaged from an hour to ninety minutes. I drove and Astrid navigated with GPS.

Initially it was white knuckles on the freeways. It took a couple of days and nerves of steel to get my game face on. Particularly negotiating numerous turnoffs. Since many of the museums are clustered near each other along Wilshire Boulevard Astrid developed simpler and more direct routes. GPS, while reliable, does not have that all important human factor. Instead of five or six quick turnoffs you can stay on 405 a bit longer and negotiate just one or two.

That meant ideally leaving by 10 am and returning before rush hour which picks up after 3 PM. There was so much to see at LA County Museum, with several separate pavilions, that we left by 5 pm. That equated to an extra hour of driving in the dark. Resulting in a couple of stiff ones to take the edge off.

You also have to take note of when museums are open. That meant visiting the Armand Hammer Museum on Tuesday which left Wednesday as a down day to catch up with local beach sites and a bit of much needed R&R.

Converging the afterglow of impressions there was a glut of masterpieces. Taking lots of photos in the permanent collections will allow for refreshing memory.

In some instances, like revisiting LA MoCA after an interval of decades, that entailed rebooting galleries of iconic works by Oldenburg , Klein, Rauschenberg and Johns.

Because shows travel there were some repeats. The second viewing of Jim Hodges at Hammer didn’t much enhance seeing his work previously at Boston’s ICA. Astrid liked seeing it hung in a different context. The major special exhibition at LA County was Samurai which we had seen at Boston’s MFA. Even a second viewing was thrilling but it was late in the day and we didn’t have much time to enjoy it.

Astrid liked Warhol’s Shadows at LA MoCA which given the rarity of our visit annoyed me as a waste of time and space. It was at best a fifteen minute, conceptual one off in the museum’s special exhibition galleries.

On the other hand it was better than nothing. How often have we visited museums while traveling to find galleries closed for installation. Which was the case with LA MoCA’s Geffen annex. The former vast warehouse of the Temporary Contemporary which so impressed me years ago was rented out for the week. Oh well.

We were also a year too early for the Eli Broad Museum of Contemporary Art which is under construction across the street. There was widely covered intrigue as to how and why Broad, a major donor to LA MoCA, decided to brand a building with his name and ego. In the past few years curators and directors have come and gone with rumbles in the Board/ Broad room. The experiment with NY gallerist Jeffrey Deitch at the helm went belly up in 2013.

It wasn’t all that disappointing to glimpse the new museum with its wavy, sculpted exterior emerging under wrap around scaffolding. We viewed major works from the Broad collection some years ago at the MFA.

Broad has deep pockets and collects the usual suspects. When it opens, no doubt, a visit to the museum will seem much like his very own art fair. Great collections often are formed by individuals with less money and better taste. An example of that approach is the core collection of some 25 works that founding director Sam Hunter acquired for the Rose Art museum in the early 1960s with just $50,000.

Flanking the new Broad Museum is the Frank Gehry designed Disney Center. That’s where one parks for a cluster of cultural institutions. It makes for more convenience.

Let’s conclude by returning to the Hammer Museum. There is a Hammer pavilion at LA County that focuses on ancient art. I anticipated seeing Hammer’s renowned Old Masters. There is a relatively small space devoted to stunning works by van Gogh, Daumier, Rembrandt, Moreau, Gauguin and Cezanne. In particular I fell in love with a ravishing portrait of a young Sarah Bernhardt by Alfred Stevens. I had no idea she was so beautiful.

Mostly the Hammer evoked a larger and better space than Boston’s ICA. The architecture, to be sure, is pedestrian but offering more galleries for several simultaneous exhibitions. The overview of conceptual photographer, Robert Heinecken, was particularly intriguing. Inspired by a response to Susan Sontag’s seminal On Photography his work is more photo based or about photography. He spoofed her in two mosaic like “portraits” of random prints, sorted for value. What a zingy send up of the influential theorist.

There were a couple of black box video installation. Groping about in the dark in a gallery of several works by Yuri Ancarani there were bean bags on the floor. I couldn’t get comfortable and lasted through just one of several pieces.

As there was a bench we stayed longer through Mario Garcia Torres’s spoof on Alan Smithee. It is an alias used widely by directors disowning their dismal works. An actor portrays the alleged Smithee conflating the invented persona with his assignment to perform the role. It discusses a now considerable body of creative/ trashy works. It evoked Ed Wood, arguably the worst ever Hollywood director, who actually took pride in films that are so bad they are treasured as campy good.

Perhaps it is time for a festival of the works of Smithee. Or the collected publications of Bob Fowler.