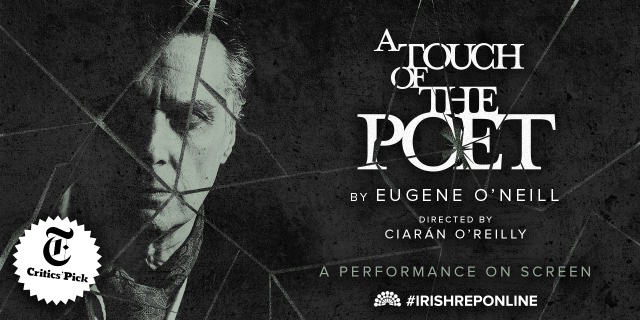 The Irish Repertory Theatre was preparing to present Eugene O’Neill’s Touch of the Poet when Covid struck and theatres closed.  Sets were ready.  Costumes had been fitted.  Most  importantly, rehearsals were underway.

Ever inventive, the troupe has re-grouped to put the production on streaming.  The advantage of a set richly reflecting the progress of the drama is immediately evident.  Our eyes rest on the stage.  In the homes of various actors, bits of the set which backup the performance moment are projected.  Common table chairs from the set have been delivered to the home set.  Now, when an actor appears alone, the context of the stage surrounds him.  Directed by Ciarán O’Reilly,  this work is a masterful performance on screen.

Pains have been taken to match portions of the set when actors speak to each other.  A modern version of traditional blue screening in film, where say Humphrey Bogart and Katherine Hepburn are in a boat in a tank and the African setting is projected around them, is used. With a few minor glitches, the screen strongly suggests a playhouse.  We are invited into the kitchen and a bar in the early 19 century America, when John Quincy Adams is running for President against the people’s candidate, Andrew Jackson. The advantage of being close to the performers is an added pleasure.

Costumes are striking.  Major Melody, otherwise known as “Con” enters in a morning suit with a light lavender silk vest. It covers his hangover. The uniform he wore during the Peninsular War is spiffy. The struggle between his alcohol drenched dreams of aristocratic grace and the truth of his rough and tumble background are exemplified in dress.

Robert Cuccioli is a compelling “Con.”  We fear for his sanity as he drowns his dashed dreams while he abuses his wife and daughter.  His wife Nora is one of O’Neill’s strong women. Kate Forbes plays her as both self-sacrificing and satisfied.  She is a woman who has followed her love and basks in its encompassing embrace, no matter its abusive edge.

This is O’Neill’s view of the feminine role.  Fulfilled by a man, and serving him in love,  a woman finds happiness.  Nora’s feisty daughter is destined for the same path, although this only becomes progressively apparent as Bella Aykroyd’s performance unfolds.

The play’s trajectories are subtly realized.  Con’s is from edited image to reality and a place in the world he can enjoy and relish once he is able to give up the Major.  The daughter proceeds to the unexpected discovery by the daughter that her mother is ‘knowingful’ – for the daughter too has decided to give up herself for love of a man.

O’Neill of course bathes us in poetry.  It is no wonder the Battle of Talavera was selected by O’Neill from the many Peninsular War battles. It has the ring of the poet about it. When Mrs. Harford (Mary McCann) asks about the Blarney Stone, we know that Con has been kissed by it.  Kissing Ireland's Blarney Stone, a tradition that's been around for several centuries, is said to give a person the gift of eloquence and persuasiveness.  Eloquence Major Melody has in spades. Yet it does not provide him with persuasiveness.  He cannot command his daughter, he cannot kiss her prospective mother-in-law, and the only dual in which he engages, and he loves the honor of duals, is with four policeman who beat him up with clubs rather than swords. As gifted actors articulate the playwright’s own poetic language, we find it superior to Lord Byron’s.

The balance of the play is weighted heavily in favor of illusion and abuse.  Yet the characters performances move toward reality and acceptance of role.  Friendship with Ciaran Byrne (Dan Roche), whose memory of the events of the battle of Talavera confirms the Major’s and the barmates pleasure in company which prepares us for Con’s choice balance the presentation.  John Vennema’s elegant pre-Trumpian bribe suggests the role of money in an earlier version of America.  He is stuffy to the end, even when Con raises his fists.

The Irish Repertory is extending streaming possibilities by showing how a set, costumes and lighting can bring us closer to the real thing.

Next up is A Beggar Upon Horseback featuring a dramatic reading by John Douglas Thompson of Frederick Douglass’s “Letter from Belfast.”  November 9.