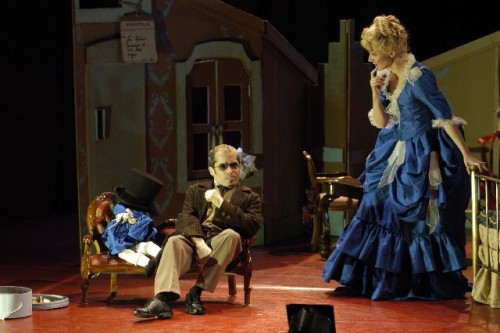 A matter of scale and power. Fit for Nora’s husband Torvald, not her.

Kinetic, raucous, and hyperactive, the Boston premiere of DollHouse by the experimental ensemble Mabou Mines’ siphoned Henrik Ibsen’s spare, polemical A Doll’s House (1879) with hallucinatory abandon. Ibsen’s play was less about 19th century marriage norms and feminism than individual rights. However, MacArthur prize-winning director Lee Breuer’s DollHouse explodes from the imbalance of power and scale for his critique of patriarchy. Visually, Breuer makes his point by casting nearly 6 foot tall women who are manipulated by small men, about 4 feet tall.

This slight of body was convincingly played by Kristopher Medina as Torvald Helmer and Nic Novicki as Nils Krogstad. As the audience listened to their commanding gestures, the small men grew in stature. Perhaps, not by coincidence, this imbalance of power resonates with the current economic phenomena of the 1% ruling the 99%. Sacrificed in such imbalances of power are individual freedoms and love. Entertaining and provocative, this quick-witted evening of theater lingers, in long cat's claws.

Six Boston performances only, from November 1-6th, will conclude the 9 year, international run of Mabou Mines’ DollHouse.  “Above all do not miss Mabou Mines DollHouse. It is what one searches for, night after night..." (Le Monde, Paris). The six performances are presented by ArtsEmerson at the Cutler Majestic Theater, in its second season of The World on Stage.

Puppetry in this lush melodrama performs as a kind of shadow world that, in the second half, holds a mirror to the audience.  It is a play within a play.

The scale is suited the small men who dominated her. Nora is kept on her knees, literally, frantic to conform, against ludicrous odds that assures the audience (and her husband) she can never find herself, at home.

The idea to cast ‘little people’ as a way to undermine an authority figure occurred to director Lee Breuer (74) many years after he saw this ploy in Berthold Brecht’s production of Coriolanus.

Breuer said of DollHouse “It’s virtually a cartoon. And yet, at the same time, it’s tragic because it [masculine domineering] works.”  Inequality is visible in many details. After Nora leaves her husband, she stands in a box seat above the stage, her frontal nudity is unmatched by Torvald’s, he is completely nude, as well. The difference is, we see Torvald from behind and on stage, standing on top of their bed. His power hidden while hers is stripped bare, even.

A cartoonish romp or a realistic picture drawn in the late 19th century or early 21st century, the effect is similar, the delivery aimed for different audience. Such an imbalance of power maintained at all costs wrecks havoc to both free-will and to love.What's gained? In the end, both powerful and powerless, lose.

The “most incendiary” of experimental ensembles (Frank Rich, The New York Times), Mabou Mines was formed in 1970 under circumstances since buried in fable and academic paper. In 1970, Lee Breuer and Ruth Maleczech, increasingly frustrated playing to all-expatriate audiences in Paris, were persuaded by Philip Glass, JoAnne Akalaitis and the establishment of the new National Endowment for the Arts, to move to New York and start a theater company exploring new ideas in language, literature, music, performance and the visual arts.

At the time, Philip and friend Rudy Wurlitzer were negotiating for a property in Dunvegan, Nova Scotia, near to a town called Mabou Mines. Mabou Mines has received over 20 Obie Awards and Special Citations, one Drama League Award and two nominations, two Princess Grace Awards, two New York Dance and Performance “Bessie” Awards, two Dramalogue Awards, the National Theatre Artist Residency Award, and many others. Director Lee Breuer has received eight Obies, the Golden Herald Angel Award, a MacArthur fellowship, and a Chevalier Des Artes et Lettres, among others.