The Bottle Tree by Beth Kander 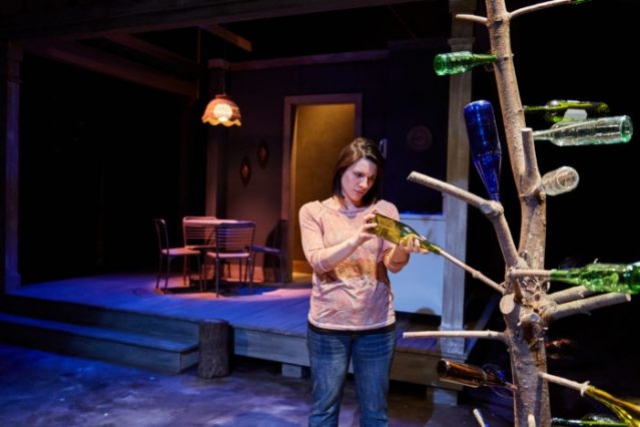 Kathryn Acosta in The Bottle Tree. Photos by Ian McLaren. A bottle tree is a Southern tradition with African roots. As an urban northerner, I never heard of such a thing, although I’m familiar with voodoo culture in Louisiana and other places. A bottle tree is a means of warding off haunts, fairies and danger by placing empty bottles on tree branches in the belief that evil spirits inhabit the bottles and the sunlight will dispose of them.

The bottle tree is a background symbol in Stage Left Theatre’s haunting new play by that name—a world premiere script by Beth Kander—about the U.S. gun culture and its most horrific example, school shootings.

Alley (Kathryn Acosta) is a teenager, home schooled after her brother shoots up their high school. When a filmmaker asks her a decade later how she feels about her brother and what happened, she has a one-word answer: “Haunted.”

We meet Alley at two stages in her life. She’s a self-confident 25-year-old being interviewed for a film documentary titled “Trigger Warning” about the shooting. She works with survivor groups to help them cope with the aftermath of incidents such as the one she lived through.

In her scenes as a 15-year-old, she’s figuring out how to get through the trauma and live her life. She has sessions with her therapist (a kind-hearted David Lawrence Hamilton) about the trauma, but she’s mostly withdrawn and uncooperative.

Rhoda (Christina Gorman), Rhoda’s mother, is trying to cope with the aftermath herself, as well as to help her young daughter. When Alley finally goes to high school across town at West Maple, she at first finds it uncomfortable, then makes some tentative friends, among them, a sympathetic Joseph (Emilio Belasco), who has his own connection to the shooting.

In one scene from Alley’s childhood, she’s preparing for Christmas with her late great-aunt Myrna, a tough Southern woman played by Kathleen Ruhl. Myrna has bought a shotgun for Alley’s older brother, Doug, and also is passing on to him a family-heirloom shotgun. Thus we’re introduced to the gun culture that permeates the rural South and other regions of the U.S.

Kander illustrates in The Bottle Tree that school shootings and other mass shootings have an impact on all the survivors—the families of the victims as well as those of the perpetrators. She tries to be even-handed in showing this impact and succeeds in perhaps being too fair. The film documentarian (Toya Turner) finally asks Alley some deeply probing questions in the last moments of the play.

Amy Szerlong’s direction brings out fine performances by the cast. Acosta has a wrenching role to perform as the sister of a shooter, as does Gorman as his mother. In Katherine Arfken’s effective bare-bones scenic design, the bottle tree sits at the side of the stage . From time to time, a character removes or replaces a bottle, suggesting change in the story of people haunted by gun tragedy.

The Bottle Tree by Stage Left Theatre continues through November 20 at Theater Wit, 1229 W. Belmont Ave. Tickets are $20-30 for performances Thursday-Sunday. Buy them online or call 773-975-8150