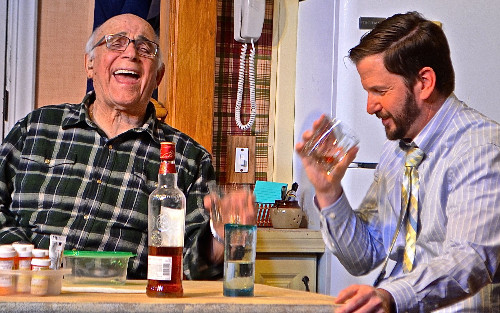 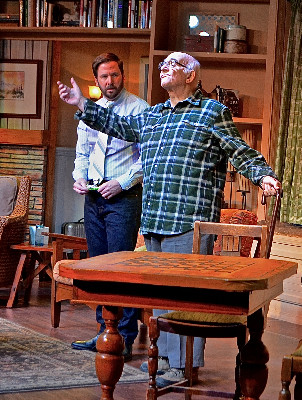 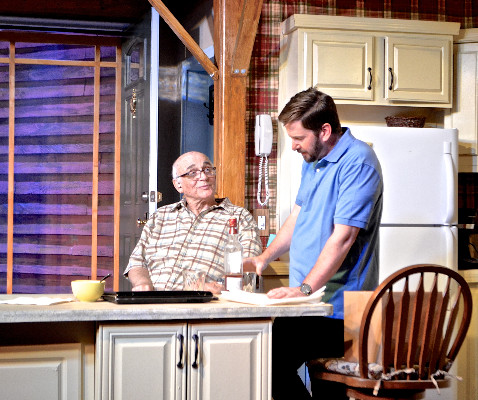 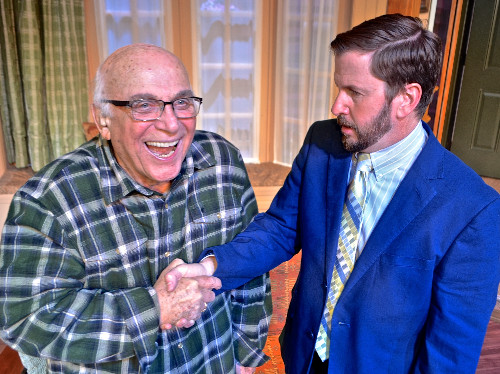 It was also an important day for Massachusetts-based playwright George Eastman as well. It was his first play to be produced in a professional Equity theatre. It was an evening where theatre professionals director Celona, playwright Eastman, and cast members Gavin Macleod and John Hawkinson, knocked the socks off the opening night audience. As we say in the theatre, when a two-hander (just two cast members) is ‘cooking on stage’ everyone in the audience is transformed as well.

“Happy Hour” centers around aging widower father Harry Townsend (Gavin Macleod) and his forty-year old son Alan (John Hawkinson) who come to grips with the vexing, but immutable, fact that aging is a human process that comes to most of us. The one longer lives, the tougher it becomes to accept it. A frequently asked question by people of a ‘certain age’ is ‘how did I get so old so quick?’

The answer is it happens in the blinking of an eye, which is why it is so important to slow down, smell the roses, and pay immediate attention to the people you love. Forget pride; pride is an assassin sent by the dark side to kill what we all hold dear: our families and our memories.

Harry Townsend is a case study in the manly/machismo philosophy. Don’t show anybody your soft side, even your children, or you’ll lose control. What is it they say about that philosophy? Oh, yes. It’s called pride. And stubborn pride definitely goes before a fall.

On the flip side of that coin, however, are the children and/or family members who must walk a very fine line so as not to alienate, and in this story, the recently widowed 84 year-old Harry is becoming increasingly grumpy, forgetful and despite falling several times without telling anyone, is determined not to be shipped off by his son Alan and his daughter Sarah (referred to but not seen) to the sterile confines of a senior care facility. His adamant NO is heard loud and clear over and over.

There is a lot of give and take between and Harry and Alan in this two act comedy drama. There are of echoes of “On Golden Pond”; the subject matter of how do we do the right thing for our aging parents like keeping them safe with proper care without smothering the flame that keeps them still with us.

There isn’t a blemish or flaw in Macleod’s portrayal of Harry. It’s a mesmerizing and riveting performance that is chock full of inspired moments of discovery. Harry is a man we all have all seen and known; perhaps, even seen within our own family. The audience resonates with his plight and that of Hawkinson’s Alan.

Alan is stuck with the unenviable task of convincing his father to leave a home that is filled with a lifetime of memories that he and his mother Jenny built from the ground up. I wouldn’t swear to it, but I think I heard a sniffle or two in the audience. I also heard the booming laughter and guffaws at the dialogue which sparkles with Neil Simon-like zingers throughout. There are a couple of moments of adult language being bantered about, so you might want to leave the kiddies at home.

What makes the play so compelling is the honesty and craftsmanship of playwright Eastman. I saw a workshop performance of the play last year. This world premiere production has been reworked by Eastman and director Celona. The story now digs deeper via more backstory of Harry and Alan’s relationship as well as with the unseen Sarah. The play now is more nuanced thanks to the personal vision director Celona brings to this production. I believe it’s safe to say that Macleod’s magnificent tour de force performance would be slightly unbalanced without the steady counterpoint of Hawkinson’s Alan. Hawkinson is always in the moment and right there when Macleod’s Harry needs him to bounce off of. There is excellent on-stage chemistry between these two fine actors.

Celona’s seamless staging of this production, if not his best ever, is certainly one of his top three. He won the Desert Theatre League (DTL) Desert Star Award for Best Director with his sensitive direction of “The Chosen” last month. His staging of “Happy Hour” will be a strong contender again for the 2015/2016 season.

The technical credits are always first rate at CV REP, and this stellar production is no exception. Award winning Set Designer Jimmy Cuomo has given the actors the look and feel of a Vermont woodsy cabin in which to perform their magic. Lighting designer and overall technical director Eddie Cancel and his crew paint the stage in lighting that lets us see the costume designs of Aalsa Lee, all of which enriches this splendid production.

“Happy Hour” is a play that should not be missed. It runs at CV REP theatre through November 22, 2015.