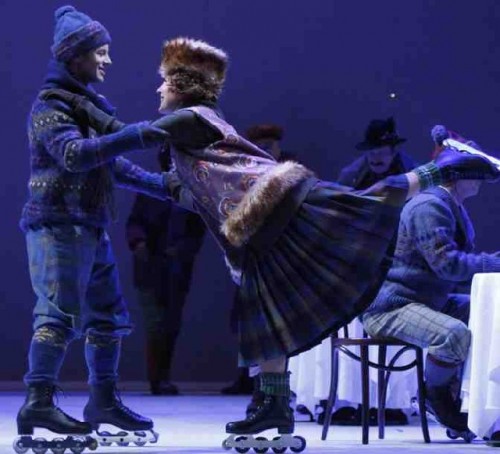 Christine takes up with a young Baron in her husband’s absence. But he proves dull, because, in addition to failing to make a living, he can’t fight. Mary Dunleavy is an exceptional Christine, showing us her tender and tart sides cheek to jowl. The Baron charms as a suitor who is in over his head. 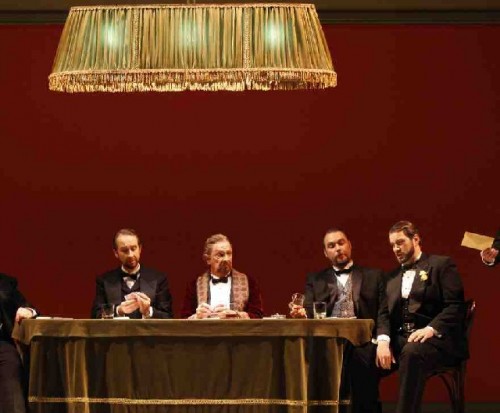 Strauss' son never wanted the game of Skat mentioned in the same breath as his fatherâ€™s. People often said Strauss preferred Skat, a combination of bridge and poker, to his music. He didnâ€™t, but when Strauss created an opening to the second Act of Intermezzo, he is playing the game. 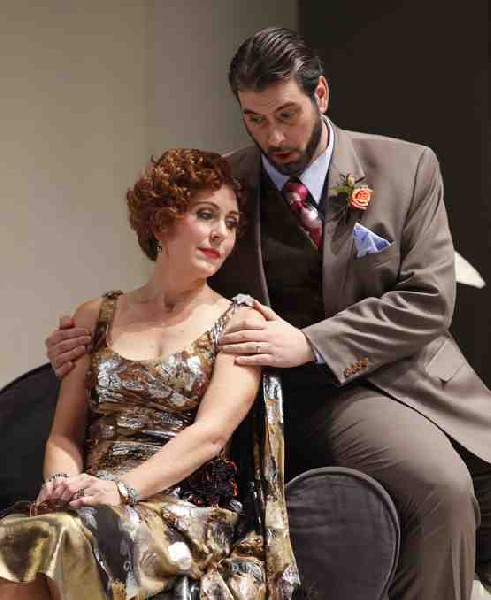 Christine and Storch, as the Strausses, lived happily ever after, even though no one else could understand why.

The New York City Opera mounted a witty, ascerbic production of Richard Strauss’ Intermezzo, a tribute to Strauss’ wife, Pauline. Strauss wrote that this was a bourgeois comedy with symphonic interludes.  In Intermezzo Strauss achieves his desire to have a light libretto tripping along over very serious symphonic music.  Conducted by George Manahan, City Opera’s music director, the score is revealed theme by beautiful theme.

The Strauss marriage, to outsiders, may have looked like imprisonment in a harridan’s den.  Pauline as presented is for sure over the top, but she is also the locus of Strauss’ life, the sine qua non, and it is not surprising to learn that she would say to him daily, “Go to your desk and compose.”

If Strauss created a work of documentary authenticity, he shaped it to drama.  Lotte Lehmann, the hand-picked soprano for the work’s premier,  thought one scene, but only one, was cloying.  When she told Strauss, he said, “Christine would have acted like this, and since Christine is supposed to be identical with Pauline, this is the way it has to be.”

Mary Dunleavy,a superb singing actress, undertakes the wifely role, a woman who may seem like a shrew, but who in fact is the a partner in a marriage that happily lasted for over 55 years. In Dunleavy’s compelling performance we understand both Richard’s attraction, and some of what bound the two.  Dunleavy sings the first lovely tune as Strauss leaves to work.  She anticipates her loneliness without him, already longing for his return.  Her performance ranges from beautiful lines to the spoken word with seeming ease.

Fortunately Dunleavy can turn on a dime, and after watching her turn 180 degrees from mood to mood, it’s not surprising when she instantly asks for a divorce after she opens a letter addressed to her husband – without wondering whether the note may be mistaken, or questioning whether a man like her husband would get involved with a tart.

The sets formed from boxes within boxes, cleverly desgined by Andrew Jackness,  and they move quickly from one scene to the next.  Dunleavy has to change clothes just as often as the set changes.  Once, when Lehmann was doing a quick change, she put on her negligee back to front.  When her stage husband had to respond to her question: “if everything now was in the best of order,” he laughed looking at the reverse décolletage.  Action does not lead to reaction here.  It leads always to higher drama.

A tobogganing scene is clearly constructed as a simple hill, whose slope is steep enough to propel sleds and toboggans.  It is more effective than the sledding entrances of some characters in the recent production of Rheingold at the Met.

Watching the treatment of Intermezzo by the City Opera is an object lesson in excellence.  The singers are an emsemble and work together.  The sets and costumes are designed to enhance the story-telling.  Tight budgets seem to bring out the best.

The comedy of errors leads among other adventures to Christine’s brief flirtation with an attentive, but doltish Baron, sung winsomely by Andrew Bidlack in his City Opera debut.  His is a thankless part, as he is worked over by Christine and gains nothing for himself, even when he musters the courage to ask for a loan, but Bidlack elicits our sympathy.  After all, what does he know about making a relationship work by fighting all the time.

Nicholas Pallesen as Storch, Strauss’ double,  sings out clearly even when Christine tries to obliterate him.  He shows clearly that Strauss was quite a man to handle this bundle of energy and willfulness. Strauss wanted to use a plain story, not based in myth and Biblical history.  When he asked his usual librettist, Hugo von Hofmannsthal, to work with him, Hofmannsthal refused saying the subject matter was in poor taste.  Strauss went it alone to create this wonderful opera.  He saw the light dialogue floating above complex and beautiful music.  When Hofmannsthal saw the finished opera, he was surprised at its seriousness and beauty.

Lotte Lehmann has written wisely:  “What can strangers ever really fathom about the secrets of a heart in love?”  Anyway, why shouldn’t we have an ode to a hen-pecked husband?

If you’re having trouble figuring out why you should continue in a partnership where you yell at each other all the time, this is an opera for you.  If you’re not, go anyway.  It is delightful.  Strauss told Herman Bahr, a playwright who worked for a while on the libretto, that there were at least ten operas in his wife’s life.  We rejoice that one was made.

At the New York City Opera through November 20th.