Celebrating the Queen of the Harlem Renaissance 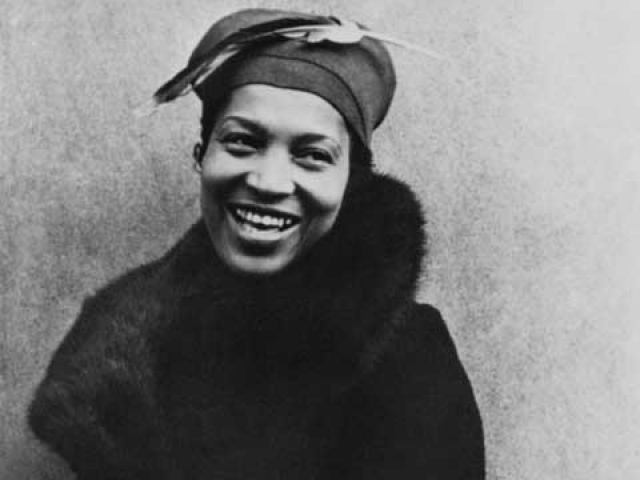 Some authors may no longer be alive, but their spirit and work will endure with fans and literature aficionados forever.

One such writer is Zora Neale Hurston, the writer and anthropologist whose skill and indomitable spirit lives on 125 years after her birth. She's perhaps best known for her novel "Their Eyes Were Watching God," about a young woman seeking her own destiny.

The "Queen of the Harlem Renaissance" would probably be thrilled with the birthday bash Off-Broadway's New Federal Theatre and Castillo Theatre are throwing in her honor. They're presenting a fresh, dynamic production of the bio-play "Zora Neale Hurston: a Theatrical Biography" through Nov. 20 in Castillo's intimate black box theater.

The two performers, Elizabeth Van Dyke and Joseph Lewis Edwards, performed the show in 1998 at The American Place Theatre, also in New York, in an acclaimed production.

In the current production, the actors sound as though they're speaking their characters' lines for the first time.

Van Dyke and Edwards are presenting performances blessed with spontaneity and emotional power. They've internalized their roles; it's obvious they've carefully thought about each word, facial expression and gesture. The result is we never feel like we're watching a performance, but two real human beings.

In addition to the performers, credit goes to director Woodie King, Jr. and his assistant, Alex W. Yoe, for pacing the play fluidly but not too quickly, allowing the nuances of the performances to shine through.

At its heart, the play's about a talented, energetic writer with views ahead of her time. She refuses to change her views just because they're not popular or let obstacles keep her from attaining success.

The play is written in flashback: In the beginning, we see Hurston at the end of her career at a dilapidated New York City bus station in 1949 on Christmas Eve. She's weary but proud and enthusiastically harkens back to 1925. During that year, she arrives in New York and makes an immediate impression on the literary world; she places near the top in "Opportunity" magazine's literary contest.

It's not long before Hurston is thrust into elite company, with such real-life characters as poet Langston Hughes, writer Alain Locke, and novelist Richard Wright.

Hughes' ambition, charisma and work ethic appear to have set her up for a successful career during the Harlem Renaissance, a flowering of cultural, social and artistic expression beginning at the end of World War I and lasting through the middle 1930s.

But Hurston's forward-thinking, feminist views put others off -- even black artists, who don't agree with, for example, her staunch opposition to integration. Hurston believed that blacks didn't need to integrate with whites to prove their worth.

She also sought to delve into the African American legacy, whereas Wright and others advocated for a "New Negro" voice. It sought to relegate characters such as "Uncle Tom" and other past aspects of the black experience to footnotes in history books. So, the author and folktale lover began studying black culture, which included a series of "field studies" in places such as Florida, the Caribbean and Central America.

Holder's play vividly captures Hurston's tenacity in the face of opposition and the many facets of her personality. Van Dyke convincingly conveys the myriad of feelings the author experiences throughout the course of the play. She slips in and out of each one with the same ease Edwards steps into and out of each of the four characters he portrays.

Through Van Dyke's robust performance, we vividly witness Hurston's swagger, sense of urgency, determination, disappointment, exasperation, fierce joy and pride, enthusiasm and charisma, independence, vulnerability and emotional pain. During the reviewed performance, tears were visibly welling in Van Dyke's eyes during at least one scene. Van Dyke's versatility is impressive, but what's also commendable is her ability to portray Hurston's independence and pride without coming across as unlikable.

Edwards is also faced with a challenging task in portraying four men and giving each a distinct personality. Not only that, he must prove a "triple threat" at times by acting, singing and dancing. Edwards has a soulful, joyous voice and shows an ability to hit the high notes without sounding harsh while also proving nimble on his feet.

As Hughes, Edwards conveys a sense of urgency and commitment to working with Hurston. His eyes, like Van Dyke's, also appear to well up with emotion, an indication of what one his writing projects with her means to him.

As Wright, Edwards is looser, while his Herbert is demanding, with a hint of menace, as Herbert tries to convince Hurston that a woman's role is in the home.

The actors, wearing Gail Cooper-Hecht's period, character defining costumes, perform on a mostly bare-bones set designed by Richard Harmon. His minimalist design includes posters hanging from above and listing the names of Hurston's works. Projections of the people and places of the time appear as part of the set. Some projections are more helpful to telling the story than others. Seeing, for example, the stern, no-nonsense face of a wealthy white New Yorker who funded Hurston's folklore expeditions helps us get a sense of the character, who never appears onstage. The woman, Charlotte Osgood Mason, was willing to fund those expeditions as long as she kept control over how the material would be used.

Projections can capture the flavor of the time and place of a story, but they can be overused. We don't need photographic projections of people merely mentioned, yet that's part of what the production offers.

One big mistake is when the performers walk behind the projection screens while speaking to one another, while projections are flashed on the screen. When, in live theater, projections are given more prominence than the live actors, whose facial expressions and gestures we need to see, there's a problem.

Aside from those negatives, "Zora Neale Hurston: a Theatrical Biography" paints a clear, interesting, focused portrait of Hurston, the artist and person, in about 90 minutes.

"Zora Neale Hurston: a Theatrical Biography"
Performances are at 8 p.m. Thursday, Friday and Saturday as well as 2:30 p.m. Saturday and Sunday
Castillo Theatre, 543 W. 42nd St.
Tickets are $40 general admission and $30 for students and senior. Groups (10 or more)  are admitted for $25.