Lisa Yuskavage: The Brood at the Rose 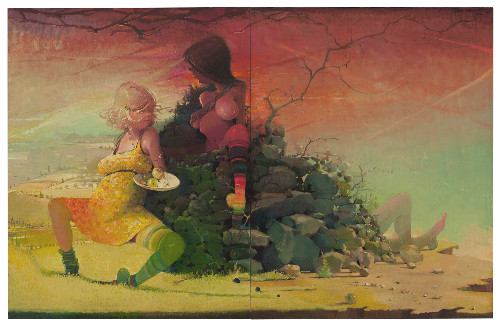 Triptych. Images courtesy of the artist and David Zwerner Gallery. 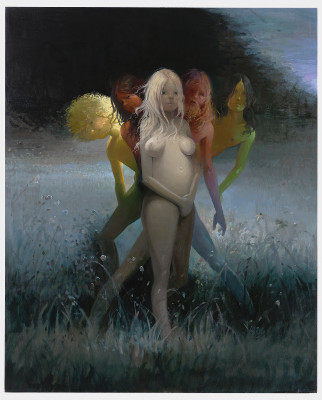 The Ones That Don't Want To; Buttons.

In 1939 Clement Greenberg wrote an essay “Avant-Garde and Kitsch.” More than a decade latter the issue was put forth by Russell Lynes in a 1954 article for Harper’s Magazine “The Tastemakers” in which, responding to Virginia Woolf, he discussed "Highbrow, Lowbrow, Middlebrow."

Coming of age in the arts in the 1960s the confluence of high art and kitsch, and Greenberg’s position against it, provided a hot button in the dialectics of the emergence of Pop art.

With her appearance in the 1980 film “Nine to Five” we learned to take Dolly Parton seriously as an artist. Underneath the major hair and enormous bosom was a whiplash smart and hip woman in an improbable partnership with ultra liberal Hanoi Jane and out of the closet Lily Tomlin.

Underneath the wigs and war paint was a trope for cutting edge art.

This is the curatorial mandate of  smart, kitschy, cartoonish, sexy and outrageous paintings in the mid career exhibition (not really a retrospective) Lisa Yuskavage: The Brood at the Rose Art Museum of Brandeis University.

The paintings of Yuskavage are to the fine arts what Dolly Parton is to music and pop culture.

Think big boobs in every sense.

Since I was a hormone pumping teenager in the 1950s the breast fetish of Yuskavage and Currin, their mindless cartoonish bimbos, are readily familiar. It was the staple of Esquire pinups or jokes in Playboy.

My how the Rose has changed. Former director, Carl Belz, ran into opposition from the feminists on his staff when he dared to show the then transgressive Pop artist Mel Ramos. Compared to the current exhibition his work seems pretty tame.

Critics suggest comparisons to Degas and Picabia. We might add Beardsley and Balthus. Artists from Rembrandt to Picasso have produced "private" erotica.

The cleverness and careerism of Currin and Yuskavage is the facile confluence of high art and kitsch. Sidebar research might explore how that evolved from Yale.

One imagines the artists and their dealers laughing all the way to the bank.

Leading critics and curators agree that Yuskavage has evolved as a heck of a nifty painter. Just look at that gorgeous color and buttery smooth swathes of paint. One might drool over the surfaces or pop a woody. Which can be a bit of a boner in a museum.

In the good old days, when Susan Stoops was a curator of the Rose under Belz, the museum was know for its support of feminism. It is where one was early to see Ana Mendieta.

But nobody is blinking an eye about seeing Yuskavage in Waltham.

There is no question that the new director, Christopher Bedford, is hip, smart, and well connected. We said that about Michael Rush, an advocate of video and multi media art, until in a big stink he was fired. None of which was his fault. That scandal in turn brought down vulgarian former Brandeis President Yehuda Reinharz.

From early in the Whitney Biennials, to her shows at David Zwirner Gallery, it has been interesting to track the development of Yuskavage. During often enervating crawls through Chelsea galleries her shows have made my day. They are devilishly intriguing in an epic struggle against my best instincts.

As one critic put it “I find most of her pictures get stuck in my teeth, where the flavor quickly drains out of them.”

The earliest pictures in the Rose show are numbingly simplistic; The Ones That Don't Want To: Black Baby (1991-1992), Bad Baby (1991), Buttons (1991), and Kelly Marie (1992). They represent the self conscious, strident, not very subtle, evocatively limited juvenilia of the artist. Given their awkward, self conscious limitations it is a wonder that the artist survived such limited beginnings.

As with all representational artists it takes decades of intensive work to master their craft. They do not leap full grown from the head of Zeus.

Consider the narrative of “Triptych.” There is a landscape panorama. On rolling hills are rows of what look like traditionally garbed, think Amish or Mennonite, women. They are numerous and small in scale. The “fundamentalist” women, one assumes sexually repressed, are witnesses to the woman splayed out over a table in the foreground and another similarly eroticized lying on the ground to her left.

The central woman is bent back making her head invisible while our gaze focuses on her snatch.

Yes, I said that. But it is the right word considering how the artist has set up this scene. It is not for me to explain it to you. But it is hard to imagine a viewer not having a visceral reaction and a feverish rush of wacky thoughts.

Are we far off the mark? Has the artist set us up for a high art smack down? Think nude mud wrestling or lap dancing on Bourbon street.

In her own words “I intentionally embarrass myself. My work really embarrasses me. I think my art makes something which is very, very private public. . . . It’s like saying, this is exactly the smell of my [expletive].”

Well, you get the drift.

OK we’ll play along but “Rorschach Blot” a painting from 1995 is over the top. The woman is entirely stripped of humanity, individuality or even personality. In our worst nightmare the woman has been objectified into gaping orifices.

Of course the kicker is that it has been painted by a woman. Imagine the conversation when she gets invited to dinner parties or has cosmos with the girls.