Bernstein at the New York Philharmonic 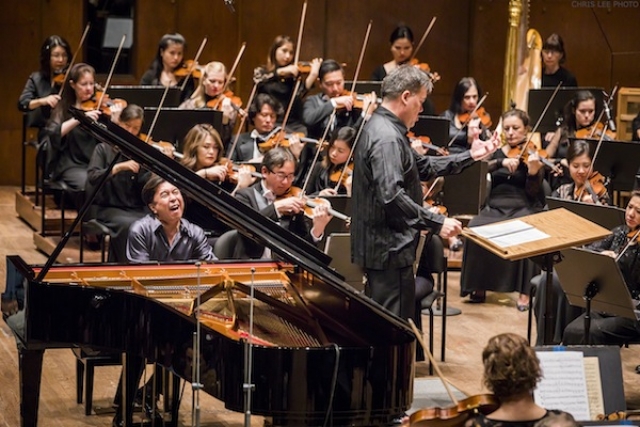 Bernstein at the New York Philharmonic
Americans who do not live in the bubbling cauldron of New York City, claim to long for a simpler, easier time. When picket fences were white, the mail was delivered regularly, and people's lives echoed the covers of trite magazines sold in supermarket checkout lines. However, New Yorkers know different. That difference was on proud display Saturday night as Alan Gilbert led the second of three programs at the New York Philharmonic dedicated to the music of Leonard Bernstein.

Bernstein: An American Festival is so far an artistic success, a last bequest from Gilbert, who exited the orchestra this spring for a job (and a better concert hall) in Hamburg, Germany. Week Two sandwiched George Gershwin's Rhapsody in Blue between two relative Bernstein rarities: the musical sketches Prelude, Fugue and Riffs and the composer's Symphony No. 2, inspired by and titled after the W. H. Auden poem The Age of Anxiety.

Prelude, Fugue and Riffs was first assembled for a Bernstein-hosted television program. Its opening consists of leftover music from the Broadway show Wonderful Town and captures that musical's feverish, energy-crazed portrait of New York through the eyes of three sailors on leave. The truncated Philharmonic (just reeds, trombones, trumpets, piano and percussion) dug eagerly into this rich musical treat, playing Bernstein's music with the enthusiasm they seem to reserve only for his work.

The huge but short fugue is a bit of a musical joke, consisting of contrapuntal writing for a vast range of saxophones. The "riffs" were the most entertaining part of this work, with virtuoso clarinet soloing from Anthony McGill and a battle between himself, the piano and the three percussionists for musical supremacy. The whole wound up in a big-band blowout chord, reminding one more of a Jazz at Lincoln Center show than a typical Philharmonic performance. It was most refreshing.

Then followed a long change as stagehands arranged chairs, moved the piano and set the venue up to accommodate the full orchestra. The pianist for Rhapsody was jazz composer  Makoto Ozone, and he and Gilbert proved to able collaborators on the full version of this famous piece. True, the long cadenza was a bit self-indulgent, wandering into modal territories before strings, horn and triangle brought the piece back home, but the strong playing of the orchestra made this familiar Gershwin work sparkle.

At first glance, the Symphony No. 2 appears to have more in common with a piano concerto than with a symphony. However its structure is completely different. Bernstein cast the piece in two sections, each a loose series of movements defined by abrupt shifts in tempo. These shifts are a series of variations in the first half, paralleling the plot of Auden's epic poem. It tells the story of four New Yorkers attempting to solve the problems of the world in a midtown bar at four in the morning. The music goes from melancholy to exultant in the manner of Bernstein's idol Gustav Mahler, and the piano weaves itself seemly into the fabric of the large orchestral ensemble.

Gilbert led a performance of this work consistent and compatible with his earlier excursions into Bernstein's repertory. He drew mysterious minor chords from the winds and shivering, juddering figures in the strings that set the listener on edge. Mr. Ozone's piano was a light of melodic sanity in this darkness, tracing out the work's key themes before being answered by the thundering orchestra. Taut dance rhythms exploded in the strings and percussion, whipping to a furious climax. The second half was the trek back to the opening, with the themes announced now in a thunder of timpani and brass. (Reprinted by permission of Superconductor).
Back to Front Page Section Home