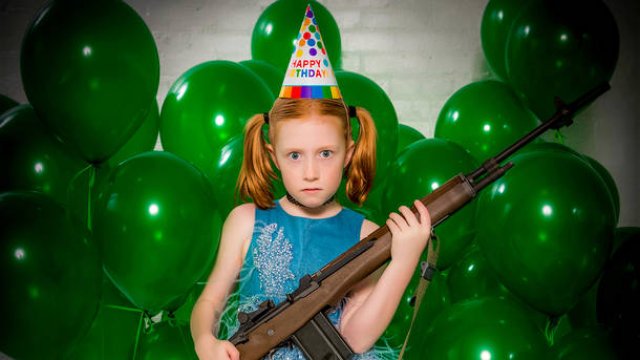 If you’re a Kurt Vonnegut reader, Happy Birthday, Wanda June will sound familiar. I was sure I had read it long ago when I was devouring everything he wrote. But no, I never read Wanda June. It’s not a novel; it’s one of Vonnegut’s short list of plays and the only one most people have heard of, because it also was a 1971 film.

But if you’re in , or can get there by November 29, you have the chance to see this wacky dark satire of American culture and ’s propensity for war and death, filtered through Vonnegut’s mad genius lens. Wheelhouse Theater Company is presenting Wanda June, smartly directed by Jeffrey Wise, at the Duke on , a cozy compact theater venue tucked in among the chaos.

Vonnegut’s premise, with a strong H/T to Homer’s Odyssey, is that Harold Ryan (Jason O’Connell), a warrior and big-game hunter who disappeared eight years ago while hunting for diamonds in the Amazon rain forest, returns home. Harold was declared legally dead and now his wife Penelope (Kate MacCluggage) has two suitors, much to the distress of their 12-year-old son, Paul (Finn Faulconer), who believes his father will return.

There’s a lot of fourth-wall breaking in Wanda June. As the play opens, Penelope faces the audience and declares, “This is a simple-minded play about men who enjoy killing, and those who don’t.” Harold tells us he has killed “perhaps 200 men in wars of various sorts as a professional soldier and thousands of other animals—for sport.”

Dr. Norbert Woodly (Matt Harrington) is a pacifist, a physician and a neighbor, and declares himself Penelope’s fiancé. His competition is Herb Shuttle (Kareem M. Lucas), a vacuum cleaner salesman and admirer of Harold’s warrior prowess. He and Penelope have a date planned on this night, which happens to be Harold’s birthday. Penelope and Herb leave; she’s wearing a jaguar coat that Harold killed for her.

Later Harold arrives with his sidekick, Colonel Looseleaf Harper (Craig Wesley Divino), whose claim to fame is that he dropped the atomic bomb on in 1945, “killing 72,000 people in a flash.” Harold, a Hemingwayesque character in style and appearance, reacquaints himself with his old home. The animal head trophies mounted on the walls. (“Miss me, baby?” he asks as he pats a lioness.) The jungle-foliage wallpaper. The animal-call doorbells: hyenas for the back door, a lion’s roar for the front.

Harold acts as if he was just away for a few days and insists on immediately reasserting his husbandly rights. Penelope fights off his embraces. Relax, Harold says. “A woman should feel like a hot water bottle full of Devonshire cream. You feel like a paper bag crammed with curtain rods.” He demands she prepare breakfast, including “a whole onion. I want to eat it like an apple.” When he finds out that Penelope has earned a master’s degree while he was gone, he says, “Educating a beautiful woman is like pouring honey into a fine Swiss watch. Everything stops.”

And so it goes, as Vonnegut would say.

Harold is a machismo figure of toxic masculinity, perhaps more now than when Vonnegut conceived his character in 1970. In some ways, the play is dated, but in other ways, it’s hyper-relevant to the current world made up of toxic male figures such as Putin, Duterte, Bolsonaro—and, of course, Trump. There are occasional blips and holes in the plot, but all in all, it’s madly delightful satire.

You were probably wondering who Wanda June is. She’s a 10-year-old girl (Charlotte Wise) playing shuffleboard in heaven, who appears along with other characters in the occasional carnival-ish dream segments. There’s Major Siegfried von Konigswald (O’Connell), also known as the Beast of Yugoslavia. And Mildred (MacCluggage), Harold’s first wife. Wanda June is also the name on the birthday cake that Herb picks up as a surprise for Harold’s birthday.

Wise’s cast is uniformly strong, with O’Connell’s manic Harold standing out when he plays the Beast of Yugoslavia too. MacCluggage’s performance shows Harold how American society and the role of women have changed during his eight-year absence. Charlotte Wise is perkily smart as Wanda June; she alternates with Brie Zimmer in that role.

The creative scenic design is by Brittany Vasta and scary sound design by Mark Van Hare. Costumes are by Christopher Metzger, which include masks worn by characters who populate the heavenly or hellish dream scenes. Did Matt Carlin’s props include a bust of Homer? I thought I recognized him.

Vonnegut wrote his first version of the play, titled Penelope, in 1960. In 1970, a producer optioned it and Vonnegut revised and polished the script and retitled it Happy Birthday, Wanda June. The play premiered at the Theatre de Lys in the in October. Here’s the original New York Times review of the play. Commenting on Vonnegut’s “inspired idiocy,” Clive Barnes says, “There was not much I found to admire in the play, but a surprising amount to love.”

Wheelhouse Theater opened Wanda June in April at the off-off Broadway Gene Frankel Theatre in TriBeca and moved it in October to the off-Broadway Duke on , The play runs two hours with one intermission. See it through November 29. Buy tickets here.