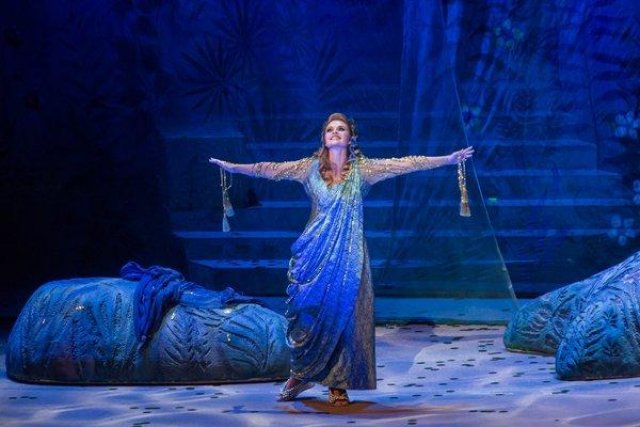 The Queen of Sheba at the Hungarian State Opera 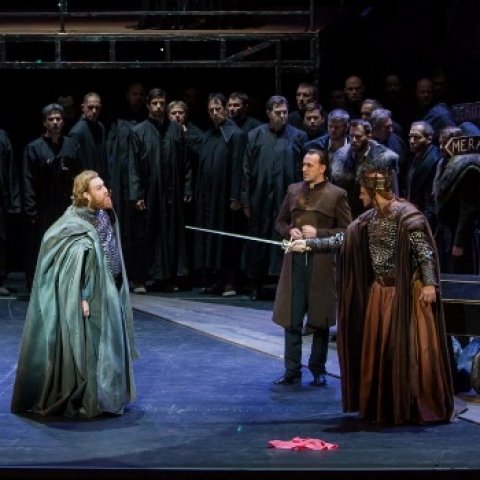 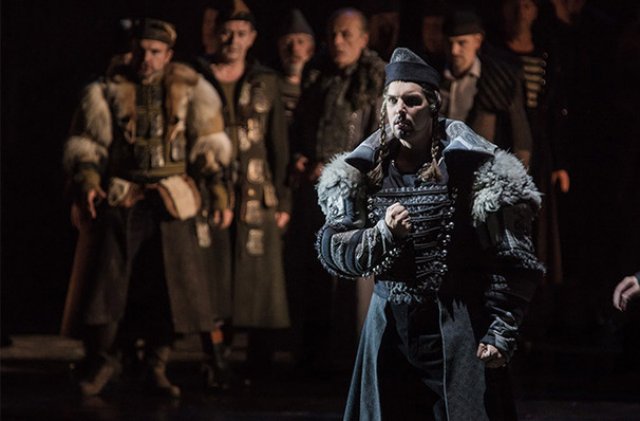 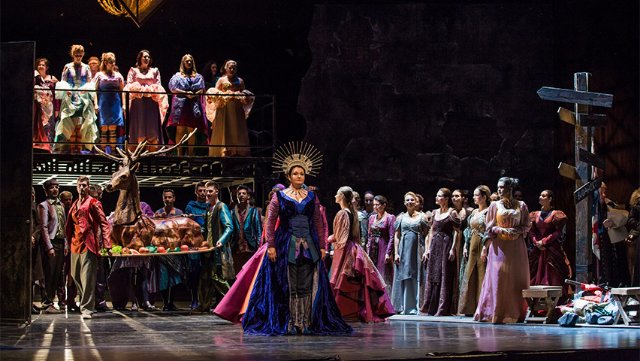 The evil Queen Gertrud and her lavish entertainments as her people suffer.

The Hungarian State Opera is a company full of talented artists whose work has not been presented to American audiences, unless they are fortunate enough to have visited Buda and Pest, and cities throughout the country that present opera all the time, everywhere.

Thomas Mann’s story, Mario and the Magician, has captured the attention of at least three other composers in addition to the contemporary Hungarian János Vajda. A production of Vajda’s version of the tale, presented by the Hungarian State Opera, makes clear why. András Palerdi sang the lead role of Cipolla the magician.  Entertaining tourists on the boardwalk in Torre di Venere, Palerdi is a first-rate acting baritone.

The inventive direction of Mario by director and set designer Peter Galambos may have expressed ideas that were larger than the company’s ability to deliver in a new setting at the David Koch Theater, yet they intrigued.  Much of the opera takes place behind a transparent veil.  A camera man sits at the lip of the stage, filming the action, which is projected to give an up close and personal view of the proceedings below.  This technique particularly benefits soprano Orsolo Hainaika Roser.  In addition to having a lovely voice, she is a consummate actress, who lives up to the flaming red hair which swirls around her as her voice does.

Mario was appropriately paired with Béla Bartók’s sole opera, the one act Bluebeard.  Both stories are distanced by their composers.  Yet the singing chorus and other performers in Mario, and the two leading characters in Bluebeard are very present despite the veil.  Mezzo Ildiko Komlosi as Judit gave us the urgency of the new bride, Bluebeard’s fourth.  She pays no attention to Bluebeard’s sotto voce but firm warnings that questions are not to be asked.  She asks and asks.  At first the consequences are minimal.  Weapons are not brandished.  Jewels and a lovely garden seem to promise pleasure.  We continue to be disturbed, yet Judit persists.  The whys and wherefores of Bluebeard’s methods are eventually revealed, with disastrous consequences for the bride, who suffers the same fate as her predecessors.  This seems inevitable, yet we hardly wonder what would have happened if she had remained silent.

Carl Goldmark’s Queen of Sheba was produced at the Metropolitan Opera in 1906.  It had  brief outing in concert form by American Opera society in 1970.  János Kovács conducted the lush score.  Frika Gal glittered in the role of the Queen. Particularly arresting was the tenor, László Boldizsár singing the role of Assad, her besotted admirer. He combined both shining helden qualities with lyricism in a complex role. His marriage is scheduled for the following day, but he reports to the ever prescient King Solomon, that he cannot go through with the wedding.  He has fallen in love with another woman.

The Queen has traveled from Lebanon to see what make Solomon wise. She too is attracted by Assad, but pretends not to recognize him as she descends the broad staircase to greet her host, the King.  This drives Assad mad, and will be followed up by the madness of Melinda, the viceroy’s wife in Bank Ban, another opera presented as part of the tour.  Both scenes were composed after Donizetti’s. Clearly madness has always been a dramatic and moving operatic device.

Melinda is sung with a moving sweetness by Zita Szernere, whose descent into delirium  reaches beautiful high notes.

Oddly, in the wars that broke out over the state’s involvement in opera in the mid-19th century, one side declared that money would be better spent on insane asylums.  The other side argued that opera should be first, second, tenth and twentieth in any list of necessary offerings. The question becomes, would you rather put people away or see them disintegrate in the form of singers on the stage.  The stage has won for the moment in Hungary.  Their appalling leader, Viktor Mihály Orbán, like his counterpart in Russia, supports art like opera with big state bucks.  This makes it difficult for artists to bight the hand that feeds them.

Hungary came late to the composition of opera.  The form suited the development of the nation state, as Verdi  also discovered.  Lajos Kossuth, leader of the revolution of 1848, contributed to a pamphlet declaiming salaries paid to the beautiful and talented opera singer Schodelne Klein Roza.  Although he supported the radicals in the debate, he tried to unite both groups under a common goal, the success of the national movement.

Nineteenth century opera was often a place where political dramas took place on stage. The music portrays national identity and also shapes it.  Hungarians wanted their own art, because German, Italian and French art was all foreign.  Kossuth noted that the opera wars were a crystallization of large social and political issues.  Ferenc Erkel, whose Bánk bán was a centerpiece of the Hungarian State Opera’s tour, created a public for Hungarian music at home.  In Bánk bán, freedom loving Hungarians are contrasted with tyrannical Hapsburgs.  The emotional expression of this drama forms opera.  Bánk bán is sung by the superb baritone Levente Molnár, a 13th century Hungarian hero, who kills the wicked Queen and then kills himself when he discovers that his wife and son have died.

The Hungarians go for the jugular in their opera stories.  They deliver magic as they perform.

The Opera Company’s orchestra is a marvel.  The singers’ voices have no problem riding on it.  In the Vadja, the composer curiously moves from elegant classicism to street music as the scene disintegrates.  Balázs Kocsár conducts to bring forth every detail and yet does not impede the forward thrust of the works.  He makes clearer than ever before the treasures that Bartok’s Bluebeard score holds. The entire story and its emotional arc are told in notes.  As the Hungarian State Opera Orchestra played, the emotional tone, the content and the color of each scene was displayed sometimes tainted with blood and at other drenched in music. Their tour has been eye and ear opening and a pleasure to behold.