First-Rate Mounting of an Under-appreciated Gem 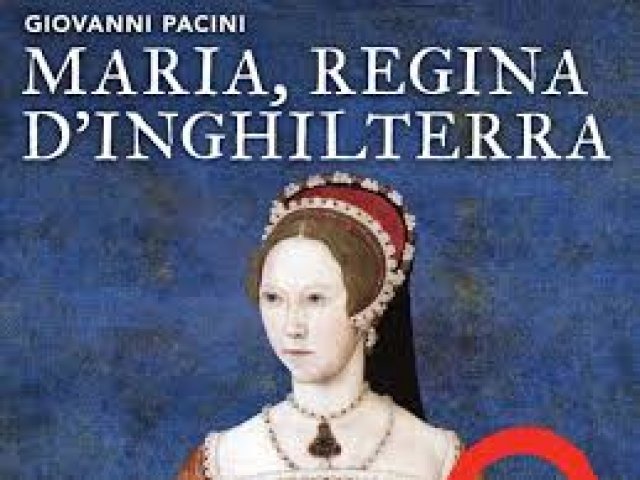 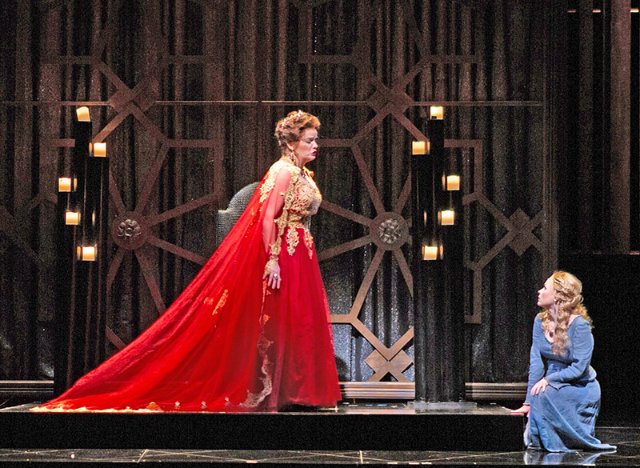 Queen Maria and Jane Talbot embrace each other to solve the problem of a cad who loves them both. Amy Shoremount-Obra is the Queen and Alisa Jodheim ab orphaned heiress. 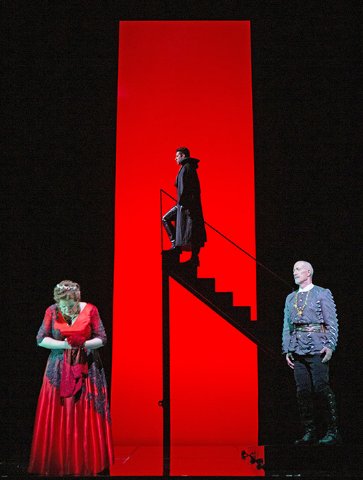 Queen Maria considers ordering the execution of her lover

Odyssey Opera of Boston is adventuresome.  Its mission is to produce unappreciated gems.  The company’s founder Gil Rose is focusing on the Tudor dynasty.  The most recent spotlight was shone on Maria, regina d’Inghilterra, by Giovanni Pacini.

Pacini wrote more than eighty operas and in his day was extremely popular.  The early to mid-19th century Bel canto form only returned to opera repertory in the late 20th century.  Pacini’s work is slowly being brought to the light of day. Opera Rara produced this 1843 gem to acclaim in 1984.

Pacini based this work on a play by Victor Hugo, which gives this opera a huge head start.  Hugo explored problems that female rulers have which are not the same as men’s.  In Maria, power plays involve Maria’s love life, the future of the Talbot dynasty nipping at Maria’s heels and, of course, betrayal by lovers and political allies.

The relationship between Maria (the big, brilliant Amy Shoremount-Obra) and her competitor for Fennimore’s affections, Clothilde (Alisa Jordheim, a glorious soprano whose runs up the octaves seemed natural),, suggests a sisterhood that may be necessary for aspiring women leader’s today.  The two women seem more interested in each other’s well-being than in that of the cad/lover who has betrayed and misled them.

Shoremount-Obra connected her voice to style and character.  Noble, fair and titanic, she pushed beyond the safety zone to portray the tale's urgency.  Her musicianship revealed the soul of the woman.  Jordheim was also sympathetic as she wavered between a man to whom she is attracted and one who deserves her loyalty and love.

Odyssey brought in a new scenic designer, Jeffrey Allen Petersen, who has made an evocative set. It both suggests the period, and is an abstraction of important story elements like prisons and guillotines.  Brooke Stanton dresses Maria in flowing red, with capes and scarves which are both intimately female and positively regal.  The lighting director Jorge Arroyo uses spots and colors to enhance the action.

This opera has music to die for.  A striking duet between tenor Kameron Lopreore (Fennimore) and bass/baritone Leroy Davis (Ernesto) as competitors lusting for the love of Jane concludes in a buoyant march.  The first sisterhood duet between Queen Maria and Jane is brought to a rip-roaring finale by the singers.

The third act caps everything that has gone before.  The scheming and conniving Fenimoore sings so beautifully as he awaits execution that we like him. A harrowing funeral march leaves Maria and Clothilde in full knowledge that either Fenimoore or Ernesto will be executed.  But which one?

Shoremount-Obra sings a heart-rending aria when she discovers it is her love whose life has been ended, by her own order.  Such are the problems of Queens.  She also gets to sing every melodic twist at the composer's disposal, relishing the change of pace and mood between each aria and cabeletta.

Gil Rose conducts the orchestra with a helping hand from Mariah Wilson, the chorus master.  Direction by Steve Maler brings forth carefully considered performances.  The melodic beauty and dramatic intensity of the opera were maximized.  It is surely a crowd pleaser, and full of masterful reverses of our expectations, to both tease and offer ah-hah moments.

Most memorable in this thoroughly realized production were the performances of the ladies Shoremount-Obra and Alisa Jordheim as Talbot.  Both seem ideally suited to over-sized roles and out-sized demands on the big stage.

After teasing us with one Pacini opera, it would be terrific to hear more of his work. He wrote a opera set in Florida two years after it was discovered by Ponce de Leon, and many other delicious works in his repertoire of over eighty operas.