The Height of the Storm on Broadway

Eileen Atkins and Jonathan Pryce Struggle With Loss and Memory 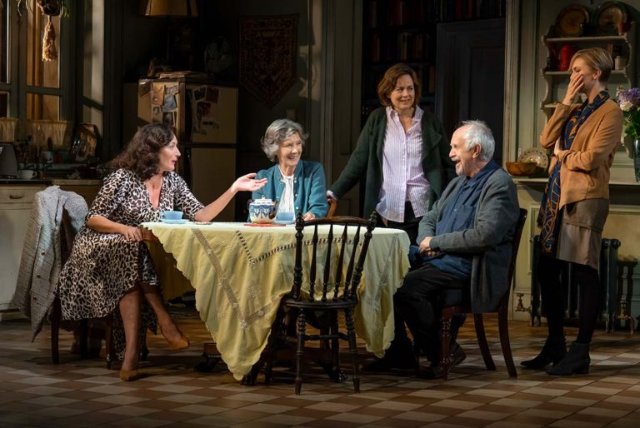 Loss of our nearest and dearest can be a traumatizing, life-altering experience. But many people believe that the true grieving begins only with the separation of time from the loss. The days after death can be surreal. The survivor suffers periods of denial and times of clarity that celebrate reminiscences, along with spasms of anguish. Sleep may come with great difficulty and only accentuate the torturous process, as dreams may deceive the sleeper into believing that the loss has not occurred.

French playwright Florian Zeller explores the disorientation of the first days of loss of a loved one in his ambiguous but ingenious and provocative The Height of the Storm. The play itself can be disorienting to viewers as the author takes us through flashbacks in a 50 year marriage and present-time sequences that often prompt more questions than provide answers. In some scenes, spirits seem to embody characters. And we find ourselves wondering what is real and what is fantasy. Is life a dream? Do we all interpret the same experiences in the same way?

This mind-bending drama is performed by a great, almost all-British cast headed by two of contemporary theater’s most renowned artists. Jonathan Pryce is André, the father. Though his cynicism is much on display, his assertion that “those who seek to understand are morons” can hardly be taken seriously. Pryce gives a stellar performance full of rage and cantankerousness as a fiercely independent writer who reveals great emotion, but little of his life’s history. Indeed, a mystery woman from his past appears and upsets assumptions about the man’s life.

André’s spouse Madeleine is deftly portrayed by the equally formidable Eileen Atkins, though she has less range on display. She is in many ways the antithesis of her husband – disciplined and level headed as reflected by two episodes of her systematically and effectively peeling the skins of large lots of mushrooms while otherwise getting on with life.

The reader may infer by names alone that this play is about a French family. Interestingly, in times past, when the occasional non-English speaking character was portrayed on stage or screen, the actor either faked a foreign accent or spoke with a British one. In this case, the story could take place anywhere, and leads are so quintessentially British, that it seems they are more likely outside London than Paris except when the occasional reference to France is made. This slight dissonance does not detract from the power of play.

As stimulating as this play is, it’s not for everyone. For one seeking catharsis and closure, it may not satisfy. But the outside-the-box thinker, particularly one who enjoys a soupçon of mystery and disentangling narrative webs on the way home from the theater, this one will make you think. Was that card that André picked up from the floor the missing card from the flowers that were received or the real estate agent’s business card? The implications take the viewer down different paths.

The Height of Storm by Florian Zeller is produced by Manhattan Theatre Club and plays at the Samuel J. Friedman Theater, 261 West 47th Street, New York City through November 24, 2019.