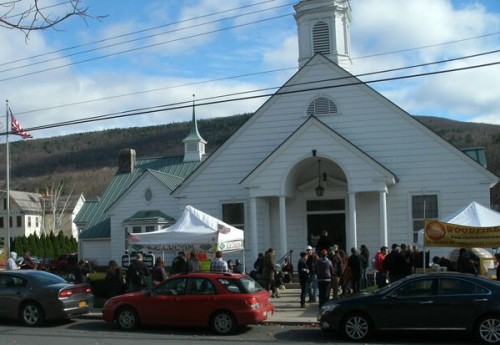 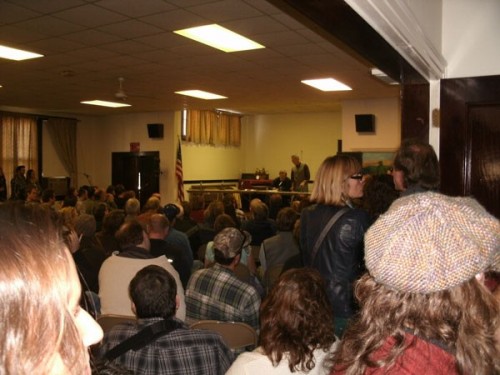 The hall was packed for the First Annual Amateur Cider Making Competition! 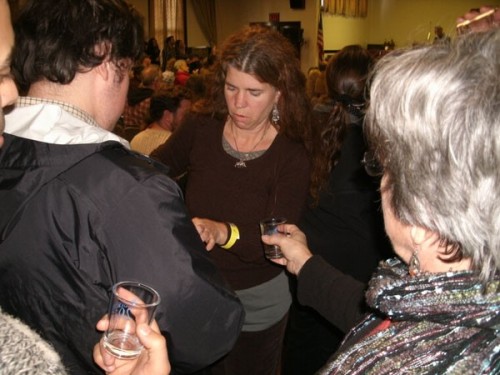 Volunteers passed among the audience pouring samples of the ciders being judged. 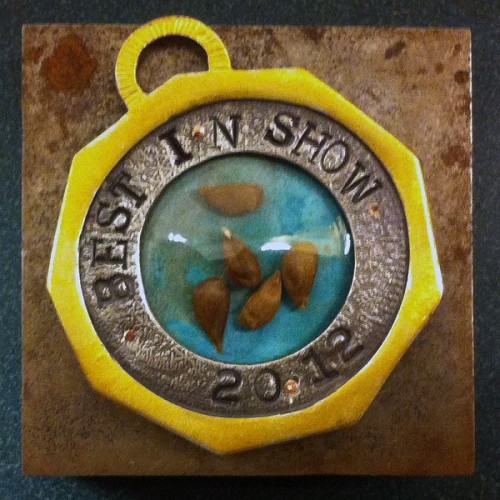 The Best Of Show medal in this AHA sanctioned competition went to Lance Reed of Lexington for his common cider, "Happy Cider" 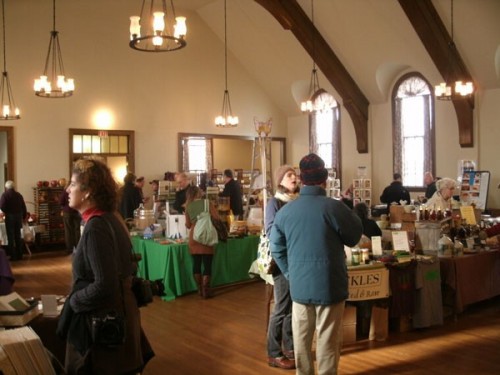 Here among the vendors, I discovered Cider Syrup! 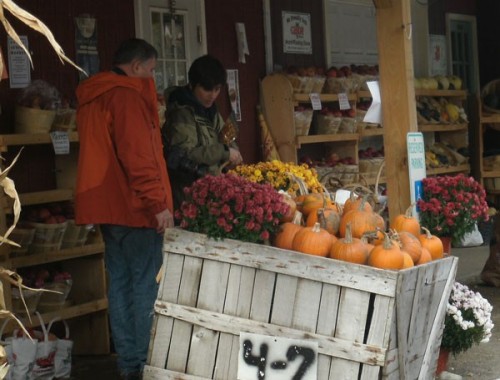 Hager Farms was just one of many Franklin County farmstands participating in Cider Days 2012! 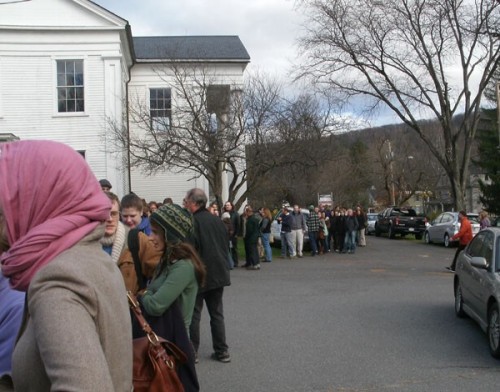 The Cider Salon line in Old Deerfield got longer and longer. 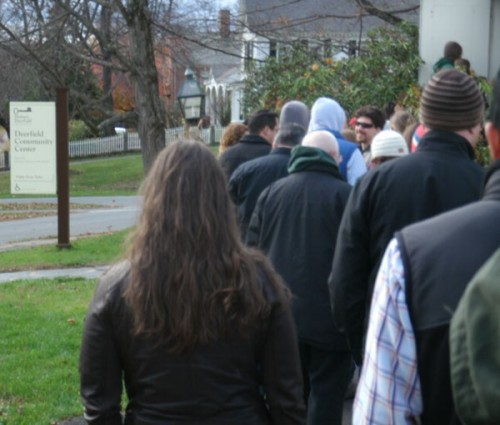 Though temps were low, one of the women in this line had toenails painted blue. I know because she was wearing only flip-flops on her tootsies.

The Salon was jammed to the left, 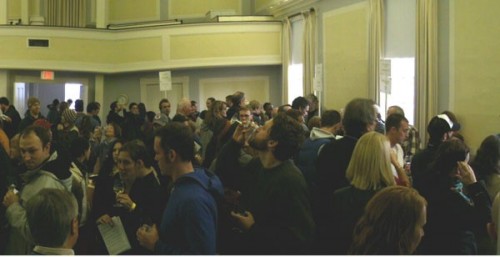 The Salon was jammed to the right. 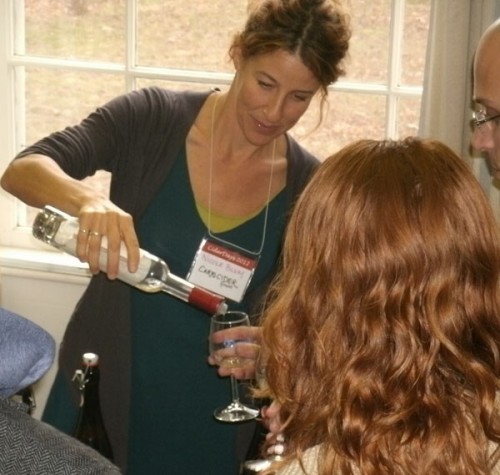 Nicole poured me a generous sample of the aperitif, Apple Pommeau, fortified with brandy, ABV 19.5%. 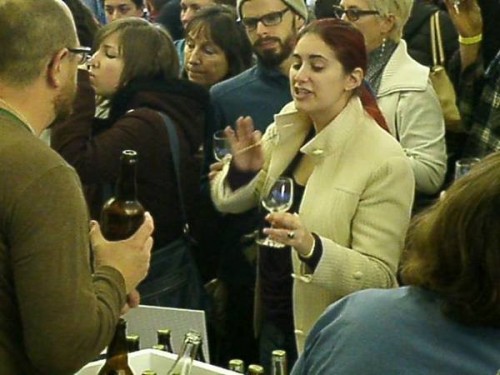 Some judgements were expressed with conviction and enthusiasm, 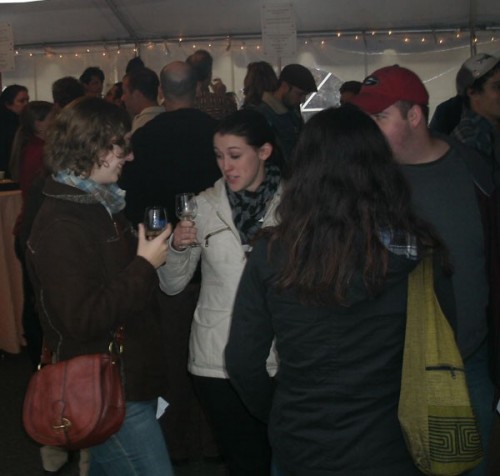 I spent the early part of a blustery Saturday, November 3rd, at the Shelburne/Buckland Community Center where the Franklin County Cider Days seemed to be centered. Cider Days is so amorphous and wide spread that it is difficult to pinpoint exactly where it is being held.

Twice I was approached by strangers wanting to know if the hall full of vendors at the above community center was all that there was to the event and they were astonished to find that it was only a small part, but that other events were spread out over a dozen locations in several different towns from West Hawley eastward to New Salem.

Mid-afternoon we visited the Artist’s Co-op on Bridge Street where the AOD, (Artist On Duty) told us that she had been surprised by the number of out-of-state visitors who had dropped in that day as a result of being in town for Cider Days, an event previously unnoted by said AOD. I mention this because it seemed to me that a major portion of the attendance at Cider Days was of folks from far flung places rather than close to home and because it indicates that the event is more highly reputed and has greater honor outside its “own country” than within.

Michael Genthner was manning the booth of Oesco Inc. inside the Community Center. Oesco, out of Conway, MA, is a major provider of supplies and equipment to the orchard growing public and Michael explained that he had participated for a number of years, his company finding that contact with many of their customers up and down the East Coast, was initiated by their attendance at Cider Days.

The vendor hall within the community center was jammed for much of the time, save when the judging and tasting of hard ciders crafted by amateurs was in process. A second hall and stage were reserved for that event and the audience was so large it spilled over into several adjoining spaces. This competition is sanctioned by the AHA (American Homebrewers Association and the BJCP (Beer Judges Certification Program) As the judging proceeded with commentary on each offering, volunteers passed among the attendants, pouring samples of the entries into special glasses which were available for purchase by those who wanted to add tasting to the pronouncements of the judges.

The were a total of 41 entries and though the majority of entrants were from MA, others were from VT, NY, NJ, NH, RI, CT and  UT.

For Standard Cider-Category 27, A common cider is made from culinary/table apples, with wild or crab apples often used for acidity/tannin balance.

According to the BJCP Stylebook, common style cider “should be a medium, refreshing drink. Sweet ciders must not be cloying. Dry ciders must not be too austere. An ideal cider serves well as a ‘session’ drink, and suitably accompanies a wide variety of food,” while if English style it should be “Generally dry, full-bodied, austere.”

Here are the prize winners with the category of cider they produced and the name they have given it.

For Specialty Cider-Category 28, which includes beverages made with added flavorings (spices and/or other fruits), those made with substantial amounts of  sugar-sources to increase starting gravities, and the beverage made from a combination of apple and pear juice.

The Best Of Show winner, Lance Reed, is from Lexington MA

I usually resist all such temptations, but when introduced to previously unknown nectar, Cider Syrup, produced and bottled by New Salem Preserves and Orchards, I was lost. With a flavor unusual, familiar and addictive all at the same time, this syrup now sits on my cupboard shelf and will be featured among the gifts I present this coming season.

The final event of the afternoon was the Cider Days Salon, clearly the event of the day for many. I attended the first of two scheduled sessions along with a few hundred others and was told that both sessions had been sold out. At the door of the Old Deerfield venue a line was already forming a half hour before  the scheduled beginning.

Inside 35 producers of fermented cider products originating from several states, two Canadian provinces, Spain, France, England and New Zealand offered samples of some hundred or more different cider variations from the driest of the dry to the sweetest of aperitifs and examples of the extensive range between. As a novice I sampled cautiously and moved around the rooms in a clockwise circuit trying almost all of the offerings. Another strategy where only dry, (austere) offerings were sampled, and then the mediums and finally the sweeter might lend itself to better comparisons, but hey, this was my first experience and I did not expect it to be more than an introduction to the options. I did note a slight preference for the blended and the medium over the single varietal and austere. With more experience, those preferences might very well change.

If you read my earlier piece on Cider Days you will know I thought I knew a lot about apples, but this weekend taught me that what I don’t know is infinitely greater than what I thought I knew.

Eavesdropping at the tables where bread, cheese and crackers served to clear the palate I learned bits and pieces about Heirloom and Heritage apples, about the Court Pendu Plat, an apple introduced 1500 years ago to Europe and the British Isles by the Romans and still grown today. I overheard conversations where phrases like “vegetative propagation,” “cryoconcentration” and “cryoextraction” were bandied about. I heard about wild yeasts, twice fermented, cold fermented and bottle conditioned ciders. I heard those words and many others, but until looking up those terms upon my return home, was baffled as to their meanings.

With the renewed interest in a table beverage once common to our forbears’ mealtimes and a growing culture of cider crafting which still falls far short of the expertise once accomplished, now lost, I will be curious to see how cider finds its place along with beer, wine and other specialty drinks in a complex and competitive marketplace.

Oh yes, I hope to be back in Franklin County for Cider Days 2013.

Perhaps this will whet your appetite as well-