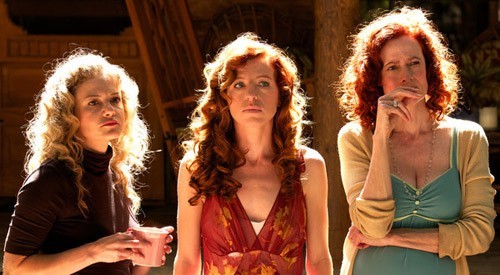 Writer/Directors of films, over the last fifty years, have championed and promoted the phrase “personal vision” and/or “auteur”.  Other creative art forms like painting, music, and writing usually are create alone.  Film, however, is a collaborative art form.  Instead of paint, clay, or musical notes, movies are the stuff of dreams accompanied by a story. And, stories have words and images about people or things that move.

He epitomizes the self indulgent “indie filmmaker”, and often uses his family and friends as actors in his films, occasionally joining the cast himself in order to tell his stories of ordinary people, with not so ordinary problems.  His films are character driven, and entertaining, if one can get on his wavelength.  If not, then a Jaglom film may leave you scratching your head and asking yourself what was it that I just sat through?

“ Just 45 Minutes From Broadway”, now booking into art houses across the country, is a typical Jaglom movie. For starters, Jaglom introduces us to the dysfunctional Isaacs family of unconventional actors.  A family gathering is the rationale to introduce a new, staid, fiancé (Judd Nelson) of Betsy (Julie Davis) the acting family’s traditionally-minded “non pro” older sister, to her show biz family and relatives.  They all gather, over a weekend, at her parents George and Vivien Isaacs’ (Jack Heller and Diane Louise Salinger) crumbling and aging-without-grace, home in a sylvan woodland setting outside New York City.

George is a Chekovian devotee who views and lives his life through the literary lens of Anton Chekov.  Vivien is a larger than life red headed actor/drama queen who is more Auntie Mame-like than a traditional home-bound mother.   In the Isaacs’ world the theatre comes first.

Crashing this “announcement party” comes Pandora Isaacs (Tanna Frederick), the young sister who is just getting over a recent breakup, and is now seeking solace and attention.  The sisters have been distant toward one another for some time.  “Pandy”, as the family calls her, is also an actor along the lines of her expansive and over-the-top mother.  Betsy views her family as people who can’t get in touch with reality.

The weekend provides lots of time for talk, and lots of opportunities to drink lots of wine. Various family members and relatives, chime in from time to time, occasionally roiling the waters.  Subtly is not always a strong suit in Jaglom films, so one awaits the obligatory scenes of new fiancé James coming under the spell of Pandy.  Fasten your seatbelts, it’s going to be a bumpy weekend once Betsy catches wind of the shenanigans.

Jaglom claims writer credit on the comedy and rightly so, but he also allows his actors, from time to time, to indulge in improv dialogue.  The actors love it.  The audience sometimes finds itself wondering if they missed something along the way.

For all its ennui (very Chekovian, by the way), “Just 45 Seconds From Broadway” has vividly lush photography and richly textured sets and lighting, thanks to cinematographer Hanania Baer who eases the pain of some of that ennui, but not enough, I’m sorry to say.