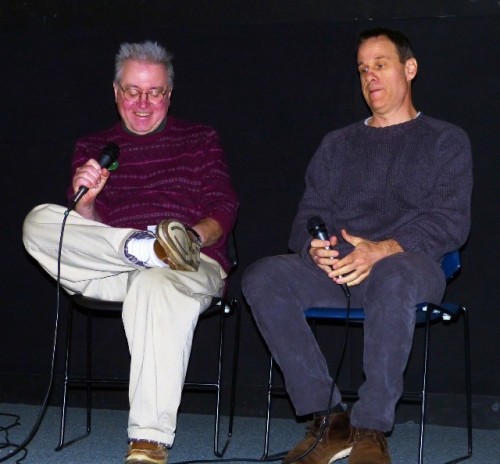 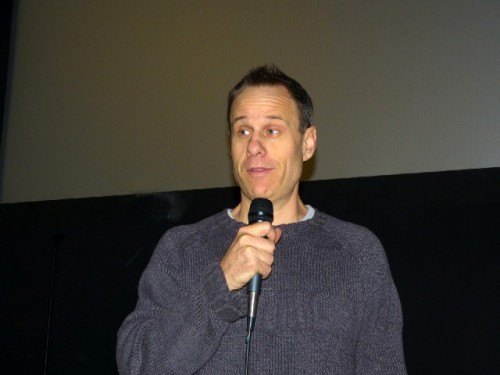 Belber disusses his film with the WFF audience. Giuliano photo. 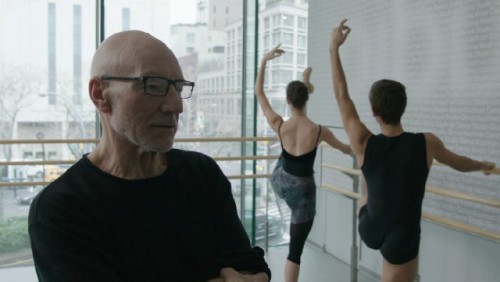 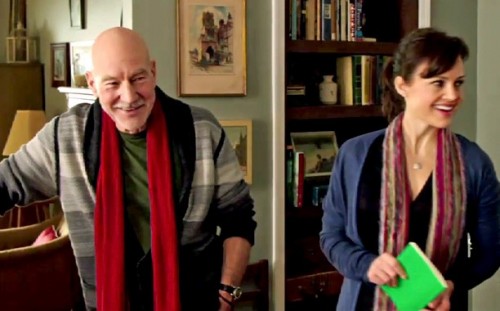 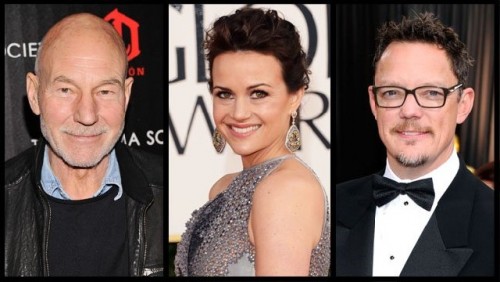 Stephen Belber adapted his 2005 Tony nominated play Match, starring Frank Langella, as a film screened today as a part of the 16th annual Williamstown Film Festival. This was a return to WFF for Belber after several years.

Initially Belber worked with Langella for the film lead but that didn't work out.

This is a small independent film which will be celebrated for a larger than life, expansive, over the top then reduced, nuanced and masterfully subdued performance by the magnificent Sir Patrick Stewart.

While it is Stewart’s film from start to finish he has superb support by the sweet faced Carla Gugino as an ersatz graduate student, Lisa, and her scowling, mean and macho husband, Mike (Matthew Lillard) who we eventually learn is a cop.

They have traveled from Seattle to Manhattan to interview Tobias Powell or Tobi, a dance professor at Julliard, on his role in the liberated American dance scene of the 1960s. It is presented as part of the research for her dissertation.

Flattered by the attention and challenged to jog his memory initially he throws himself into the exchange with flamboyant, over the top, campy enthusiasm.

About a third of the way into the film, as Tobi goes on and on about his life in dance, I was ready to pull the plug on what seemed like bad writing, a boring plot and gross overacting.

Then there was a stunning reversal as things were not as they appeared.

Initially, Mike was just tagging along lapping up the liquor that Tobi required to stoke his anecdotal laugh track. Mike seemed limited to cryptic comments, insistent questions about explicit sex, and boorish homophobic barbs. You wondered why the film included such an archly unappealing character with seemingly no redeeming qualities.

Lisa is clearly a nice person and what is she doing with this lout?

The seemingly casual discussion of free love in the dance world in the 1960s, now there’s a juicy subject, hones in on just one of his many partners. Eventually, focusing on the specific dates of their brief affair.

From clowning and titubating, instantaneously, in a wonderful feat of acting Tobi’s mood and demeanor shift abruptly despite a fog of booze and hash. It dawns on him that they are not who they say they are.

He terminates the interview and demands that they leave. Mike won’t budge and escalates as a bully. Tobi realizes that he is the son of that long ago lover. He has gained access through deception to press the issue of paternity. This includes an ugly struggle to get a DNA swab. Tobi is graphically raped in the mouth.

When Mike eventually charges off to a lab to get the results there is a stasis.

All that violent thrashing about has made a mess of the apartment. Lisa lingers to tidy up. While Tobi, now calm and come to his senses, emerges from the bedroom and offers her a prune pastry. This morphs into a poignant episode of tea and sympathy.

While truly sorry for the way things have gone she listens as Tobi reflects on regrets of not parenting Mike. It was that or abandoning an offer to tour with a company in Buenos Aires. Until a knee blew out that meant a long career now downscaled to teaching.

Returning to fetch his wife Mike may be right when he accuses the selfish Tobi of being unloved. If I kill you and leave you here for several days nobody will care.

There is devastating truth in the accusation. Not having had any physical contact in years Tobi has taken up knitting. It seems that because of marital issues, with seeking out Tobi as part of the “therapy,” she hasn’t been getting much either.

He also insists on a dance exercise which is about letting go and being in touch with emotions.

By the end of the film Belber has us really care about the characters. Of course it helps to have such fine performances.

Not surprisingly reviews of this small, claustrophobic film, the first directed by Belber is getting at best mixed reviews. It is destined for short runs at selected art houses. This is hardly megaplex material.
The film opened at the Tribeca Film Festival in April. Theatrical release is scheduled for January.

There is momentum building for Stewart to earn his first Oscar nomination. Perhaps it is a long shot but critics are stating that it is among Stewart’s finest performance and with a distinguished career he is due for recognition.

Be sure to bookmark this film when it is released on Netflix. Be patient. It’s a bit of a sleeper that creeps up on you with a strong and surprising finish.