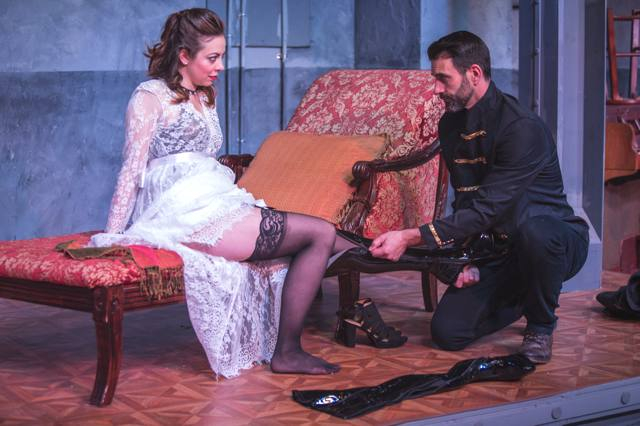 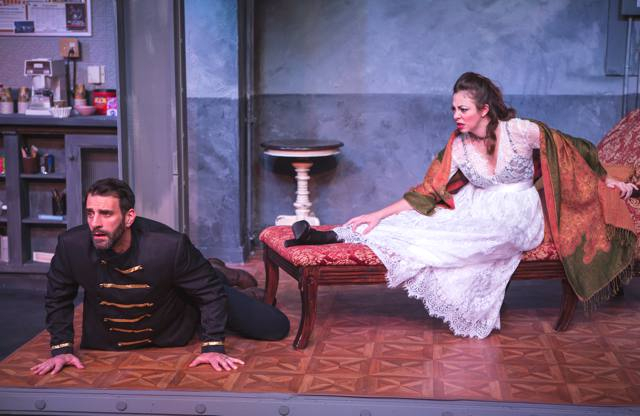 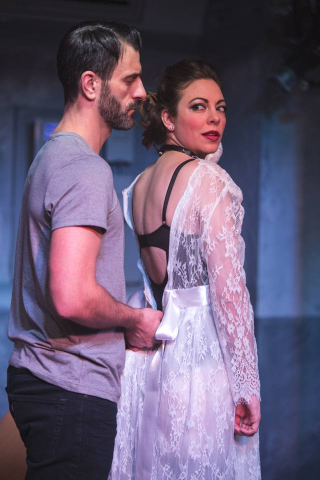 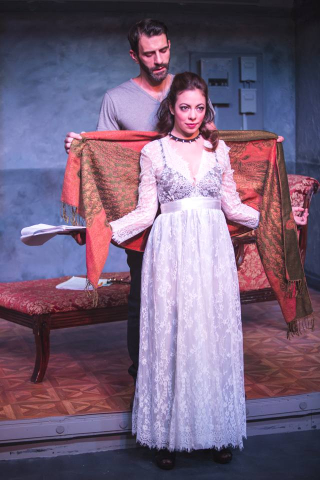 Great acting is often accompanied by great writing.  The inspired playwright writes and talented actors then breathe life into the characters. Then it falls to the gifted directors to infuse their expertise and personal visions, into the process much like a symphony conductor choreographs and leads the orchestra.  When the stars in the heavens are properly aligned and the theatre gods shine down, the result is often a flawless, magical evening in the theatre.

In the case of CV REP Theatre’s current production of “Venus in Fur”, the gods, have, indeed, given their approval. The dramedy written by award-winning and Tony-nominated playwright David Ives, is brilliantly directed by CV REP’s founder and Artistic Director Ron Celona.  The sexy and sizzling play knocked the socks off the opening night audience thanks to the performances of its two stars Angela Sauer and Patrick Zeller.  More about them later.

Playwright Ives is somewhat of a non-traditional theatre creature in that he is a screenwriter and a novelist known for his many short one-acts – he’s considered as the master of the short form – which culminated in a full-length play “All in the Timing”, and was the most produced play in America (after Shakespeare) in 1996.

Actors love his work because he writes about subjects and themes that allow them to stretch beyond their traditional creative boundaries. Fellow playwrights Christopher Durang (comedy) and Sam Shepard (drama) also fall into this category. They’re quirky and brilliant as well. Ives’ play dialogue incorporates a lot of street vernacular, which at times, can be jolting but he never talks down to his audience. For my money “Venus in Fur” is his best short piece to date, and it’s a timeless play that never goes out of style or loses its relevance.

It’s an actor’s play. Written for them and appreciated by them.  In this CV REP production, the audience is treated to two intelligent, high-octane, energetic performances.  This is my third “Venus in Fur” production that I’ve seen.  I reviewed the original Broadway show in in 2011, starring Nina Arianda and Hugh Dancy, with Arianda winning the Best Actress Tony.  San Diego Rep Company then produced an excellent production in 2013, with Caroline Kinsolving and Thomas Meeks as a formidable pair of dramatic performers.  Comparisons are odious at best, but I wouldn’t exchange this talented pair for any who have performed the play. Angela Sauer as Vanda and Patrick Zeller as Thomas, simply put area: sublime.

The play, is a play within a play that is set in an audition studio in the Lower Eastside of in the present. Thomas (Patrick Zeller) an intelligent, intense, erudite, young playwright is getting ready to close the auditions he has been conducting all day in search of a perfect leading lady for his upcoming play that he has adapted from an obscure novel by a 19th-century author.

When the play begins Thomas is on his cell phone speaking to his wife, when Vanda, a ‘theatrical force of nature’ in the form of a very-late-for-her-audition-appointment actor, breezes into the room and immediately begins to audition for Thomas.  With the apologies and pleading by all; Vanda being late, and Thomas having closed the auditions for the night, Vanda says” … as long as I’m here can’t you just conduct a short audition?”  That pleading ‘fatal line’ being crossed by one making a power bid, and the other acquiescing, sets in motion a fascinating story of the feminine mystique vs. the dominating male ego.

The following 95 minutes become a delicious, sexy, sizzling, verbal dance of mutual seduction that keeps the audience riveted to the onstage action and the emotions between Vanda and Thomas; two formidable individuals that are superbly played Angela Sauer and Patrick Zeller.

Sauer, attacks the role of Vanda in a bravura performance of an actor who knows all of the tricks of the acting trade. She uses them as weapons trained on the ego of playwright Thomas who now warms to the idea suggested by Vanda of him playing the part of the playwright-director during the audition.  At Vanda’s urging, Thomas is now intrigued by her suggestion that he direct his own provocative and potent play.  Aaah, the lure, and the temptation proves too irresistible and Thomas willingly and eagerly succumbs; accepting the challenge of Vanda’s rules of engagement for the audition, as well as her pitch to just cast her now.

The on-stage chemistry between Sauer and Zeller is literally palpable. Their performances fully engage the audience who become fascinated by the push and pull of playwright Ives’ characters.  References to the origin of the title “Venus in Fur” also enliven the audiences’ fascination with the story.  But no more spoiler alerts.  One must come and see this potent production for oneself.

As wonderful and mesmerizing as Sauer and Keller are, they don’t do it all by themselves.  The safe harbor created by director Celona plays a key role in the overall success of this production. Celona’s seamless direction encourages the actors to stretch their creative muscles which then takes the audience along on this intriguing and highly entertaining journey of skirting around the kinky edges of bondage and domination.

This splendid production performs at the CV REP Theatre in Rancho Mirage, CA through November 19, 2017, and runs 95 minutes without an intermission.